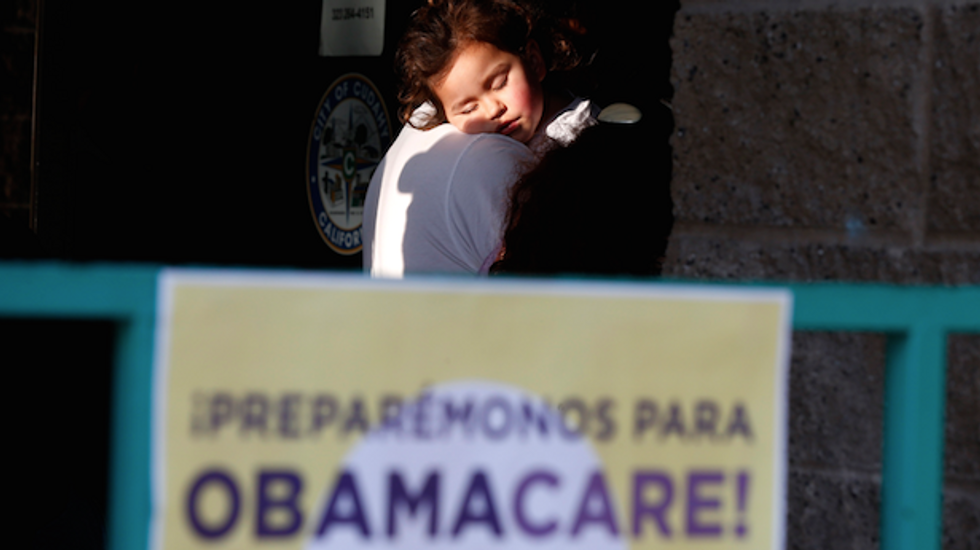 The White House said Monday that it expects final enrollment numbers for private health care insurance under the Affordable Care Act in 2014 to be "substantially larger" than 6 million after a busy final weekend of in-person and online signups.

"Here on the last day of enrollment, we're looking at a number substantially larger than 6 million people enrolled," White House spokesman Jay Carney told reporters, noting he was not sure when the government would be able to release its final enrollment figures.

The White House also said it has resolved a glitch affecting HealthCare.gov that temporarily prevented new users from accessing application and enrollment tools around midday, as website traffic volumes surged hours before a midnight deadline to enroll in private health insurance.

The Centers for Medicare and Medicaid Services, which is responsible for implementing the healthcare law, said those who were already in the system were able to complete the enrollment process.

More than 6 million people had signed up for private health coverage through the new Obamacare insurance markets by last week, surpassing a target set after a disastrous October rollout called the enrollment process into question.

With daily volumes continuing to surge, analysts believe the final tally could approach or even exceed an original goal of 7 million.

"We admittedly had just a terrible start because the website wasn't working, and despite losing effectively two months, we are going to be reasonably close to that original projection," Obama said in a CBS Evening News interview that was taped last week and broadcast on Monday.

A successful enrollment would give an important political boost to the administration and its Democratic allies, who are locked in an election year battle with Republicans over the future of Obamacare.

"No one expected us to come back from the brink," Carney told reporters before the broadcast. "But we have. And I think that merits noting in your reports."

Analysts say the total enrollment is less important than the number of healthy policyholders in the marketplaces, which have probably attracted large numbers of older people and consumers with pre-existing medical conditions, who are costlier to insure.

Obama told CBS that young people, who are generally healthy, were signing up in larger numbers late in the enrollment period, as expected.

In Houston on Monday, prospective enrollees again lined the sidewalks outside special city offices in hopes of obtaining private insurance coverage that comes with federal subsidies for low-income people.

"It's madness. But it's good madness," said Tiffany Hogue, statewide healthcare campaign coordinator for the nonprofit Texas Organizing Project, which is helping with the 11th-hour enrollment drive in the state.

People also crowded health centers across Florida as navigators and others trained to assist with online enrollment struggled with HealthCare.gov's access problems. Compounding the website's challenges were long waits at a federal call center set up as an alternative route to coverage, according to health center officials.

"It's been very, very, very busy. But the website issues haven't been bad, and people realize they've waited until the last minute," said Andrew Behrman, chief executive officer of the Florida Association of Community Health Centers, which represents facilities in nearly 350 locations.

"What can I tell you? It's like a last-minute sale," he added.

Texas and Florida, whose political leaders reject Obamacare, have the biggest uninsured populations among the 36 states served by HealthCare.gov. The remaining 14 states, including California and New York, have set up their own insurance marketplaces.

HealthCare.gov's performance on the final day of a six-month enrollment period was delayed until 8 a.m. EDT after a government tech team noticed a software bug and extended an overnight maintenance schedule to deal with the problem.

A few hours later, new users logging on to the federal website that serves consumers in 36 states were suddenly unable to create accounts and begin the enrollment process as volume reached what administration officials called record levels. By early afternoon, officials reported the issue resolved.

"Record traffic continues before the midnight ET deadline. As of 2 p.m., HealthCare.gov had more than 1.6 million visits. As of 4 p.m., there were more than 840,000 calls to the call center," said Joanne Peters, spokeswoman for the U.S. Department of Health and Human Services.

She said the day's high volumes triggered the system's virtual waiting room, a holding page where people can wait to be let into the website.

The call center volume shattered the previous record of 646,000 for Centers for Medicare & Medicaid Services call centers, which occurred on Medicare Part D's last day to enroll on May 15, 2006.

As enrollment has gathered pace, opinion polls have shown public opinion on Obamacare sharply split, with the law slowly gaining favor. A new ABC News/Washington Post poll on Monday said 49 percent of Americans now support the law, up from 40 percent in November. The latest data has a 3.5 percentage-point margin of error.

Republicans continued to pour scorn on Obamacare as a mistake that would harm consumers and small businesses.

"Republicans will continue to work to repeal this law," House of Representatives Speaker John Boehner said in statement.

"We're achieving something today that I know has our critics gnashing their teeth," Carney, the White House spokesman, said of the law's political opponents. "It leaves them with the need to go back to the drawing board when it comes to other means of trying to attack."

The system's data services hub, which connects HealthCare.gov to federal agencies, remained fully operational, allowing people already in the system to complete their enrollment, she said.

The delays occurred as healthcare reform faced a crucial test to see how many people sign up for new insurance under the Obamacare marketplaces.

Americans have until midnight on Monday to obtain health insurance under Obama's Patient Protection and Affordable Care Act or face fines. The administration has softened the deadline to accommodate those who attempt to apply for coverage by Monday night but run into technology issues.

The administration said the website "has handled record consumer demand well. Over the weekend, the site saw 2 million visits," the government said, and more than 8.7 million visits during the past week.

HealthCare.gov's consumer-facing technology has worked more or less smoothly since December following an emergency overhaul ordered by the White House. However, there are still some parts of the back-end systems that remain unbuilt.