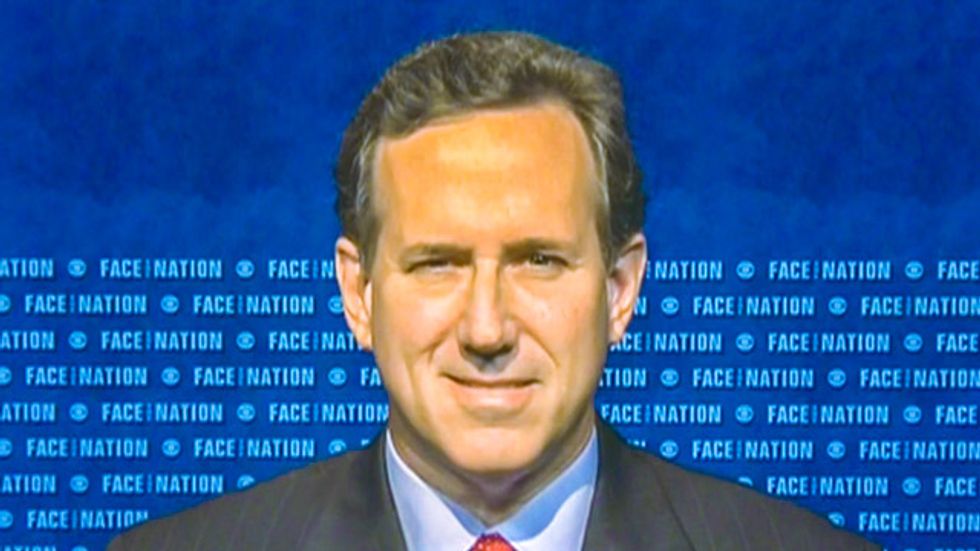 Former Republican presidential candidate Rick Santorum on Sunday asserted that Americans were safer with more guns everywhere -- including airports and at home.

CBS host Bob Schieffer asked Santorum on Sunday if the law was a "good idea."

"I said this at the NRA, I think a well-armed family is a safe family," Santorum declared. "I think a well-armed America is a safer America. I think if you look at anything from all of these attacks that have taken place is that if people had actually had weapons there, those attacks would have been thwarted and people's lives would have been saved."

"In fact, there are millions of lives that are saved in American every year -- or millions of instances like that where gun owners have prevented crimes and stopped things from happening because of having guns at the scene."

The former Pennsylvania senator argued that law-abiding gun owners would want to bring a concealed handgun into an airport instead of an AK-47.

"I don't think this is going to encourage some bad guy to cause harm in an airport, but it's going to create an opportunity that if something bad does happen at an airport, that maybe someone will be there to be able to stop it," Santorum opined.

"It's a wrongheaded approach that somehow or another, that if we take guns away from people -- law-adding people who want to protect themselves -- that the world is going to be safer," he remarked. "In fact, just the opposite."

Watch the video below from CBS' Face the Nation, broadcast April 27, 2014.