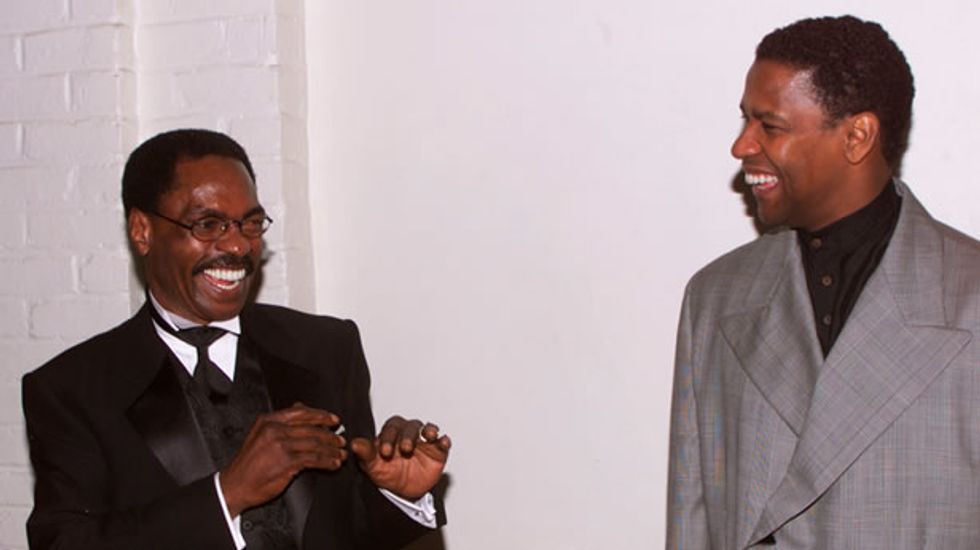 Actor Denzel Wahington (R), star of the new film "The Hurricane," based on the true story of Rubin "Hurricane" Carter (C), an innocent man who fought for 20 years for justice, pose at the film's premiere December 14 in Los Angeles. Washington portrays Carter in the film. FSP/hb - RTRTCC4

By Cameron French and Emily Flitter

(Reuters) - Former U.S. professional boxer Rubin "Hurricane" Carter, who spent 19 years in prison for murder and then was released after it was determined he did not get a fair trial, died on Sunday at the age of 76, according to reports in the Canadian media.

Carter, considered a folk hero by many and immortalized in film and song, had been battling prostate cancer for months, according to reports by the Toronto Globe and Mail and the CBC. He died in Toronto, where he had been living since he was released from prison in 1985, according to the reports.

Once a middleweight boxer who earned a world title fight in 1964, Carter is more well known for the turn his life took after he was arrested for a triple homicide in 1966.

That arrest, his imprisonment, and the ultimately successful battle to free him are immortalized in the 1975 Bob Dylan song "Hurricane" and the 1999 film of the same name, which starred Denzel Washington as Carter.

Born in 1937 in Clifton, New Jersey, Carter ran into trouble with the law as a teenager, serving custodial sentences for assault and robbery, and spending two years in the army.

In his 1974 autobiography titled "The Sixteenth Round", Carter writes of his younger years: "The kindest thing I have to say about my childhood is that I survived it."

In 1961, he channeled his energies into boxing, turning pro and earning a 1964 title match against world champion Joey Giardello, which Carter lost in a unanimous decision.

His career was already in decline in 1966, when he was arrested and charged in a June triple murder in Paterson, New Jersey. He was convicted for the shootings along with John Artis, a hitch-hiker he had picked up on the night of the murders.

Carter's case exploded into national consciousness in 1974, when two key witnesses recanted their testimony, sparking a series of stories by the New York Times and making him a cause celebre for the civil rights movement, and prompting Bob Dylan to release "Hurricane".

He was retired in 1976 and convicted again.

He was released for good in 1985, aided by a group of Canadian activists, including New York-born teen Lesra Martin, after a federal district judge ruled that his convictions "were predicated on an appeal to racism rather than reason, and concealment rather than disclosure." Prosecutors decided not to pursue a third trial.

Despite his release, some have raised doubts about his innocence, claiming the facts of his case still point to his guilt.

After his release, Carter spent about 12 years as executive director of the Toronto-based Association in Defense of the Wrongly Convicted. He broke acrimoniously with the group in the 1990s.

After his break with the non-profit organization, Carter continued to advocate for the wrongly convicted and also worked as a motivational speaker. He remained close friends with Artis, the man with whom he was convicted.

Carter is survived by two children from his first marriage to Mae Thelma.