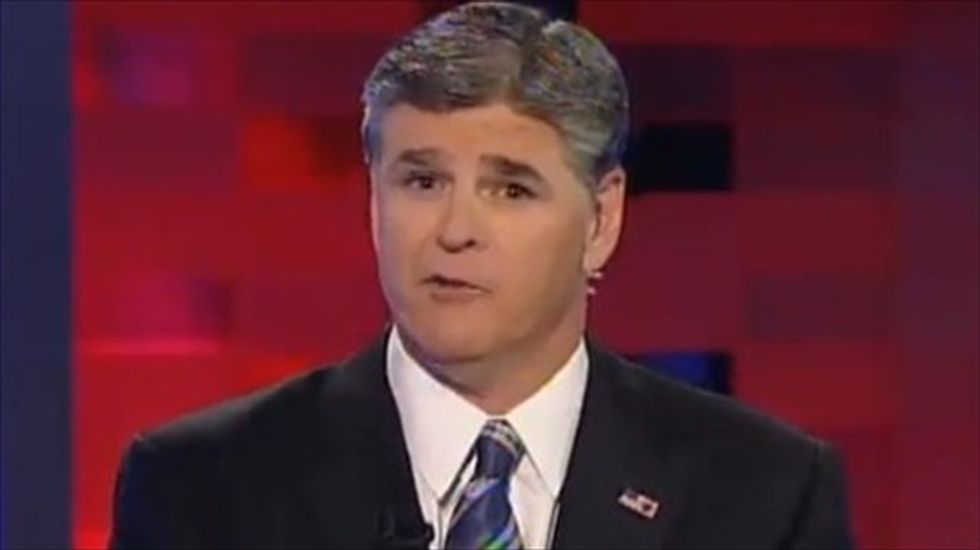 "He's kind of obsessed with this program," Hannity said. "Then he took clips of me from previous shows -- by the way, dating back more than eight years -- to try and discredit what I was saying and that I was being hypocritical when it comes to following the rule of law."

Stewart mocked Hannity on Monday over his support of Nevada rancher Cliven Bundy in his efforts to defy paying grazing fees on federal land. Part of Stewart's commentary involved footage of Hannity railing against immigration and atheism activists, among others.

Hannity did not mention that Stewart both acknowledged the timeline of the footage he used, and that at least two of the clips -- including his infamous interview with "jobless surfer" Jason Greenslate -- were actually from last year. Nor did he fully explain why he would endorse Bundy's violation of federal law and not an unarmed, undocumented immigrant seeking sanctuary in a church to avoid being separated from her family.

In his defense, Hannity played repeated clips of himself criticizing the Bureau of Land Management (BLM) for a "lack of proportionality" regarding its attempt to round up 900 of Bundy's cattle after he refused to pay federal grazing fees for two decades.

"What are we talking about here? Cows eating free government grass," Hannity said. "Can I make my position any more clear, Mister Stewart? I stand for proportionality."

Hannity did not mention his suggestion to Bundy's family that federal officials could "come late in the night" to take action against him. Nor did he mention his attempt to liken the stand-off between Bundy supporters and BLM officials in Bunkerville, Nevada to other government standoffs that resulted in fatalities.

"What I do not stand for is 200 federal agents and snipers pointing their guns at the Bundy family and their supporters," Hannity insisted. "I do not support members of the BLM pushing, shoving women and cattle being euthanized and killed, and mass graves for cattle for no reason."

Hannity did not mention that several of Bundy's supporters took up sniper positions against BLM officials. He also failed to mention one of them, former Arizona Sheriff Richard Mack, telling Fox News, "We were actually strategizing to put all the women up at the front. If they are going to start shooting, it's going to be women that are going to be televised all across the world getting shot by these rogue federal officers."

Instead, Hannity accused Stewart and his "army of 50 writers" of being the "chief suck-ups to the Obama administration."

"Jon Stewart, he's had President Obama on his program -- he was a guest, I guess, most recently in 2012," Hannity said. "Did Jon Stewart ask Barack Obama about his friendship [with] unapologetic domestic terrorist Bill Ayers [and] Bernardine Dohrn?"

Watch Hannity's response to Stewart, as posted online on Tuesday, below.