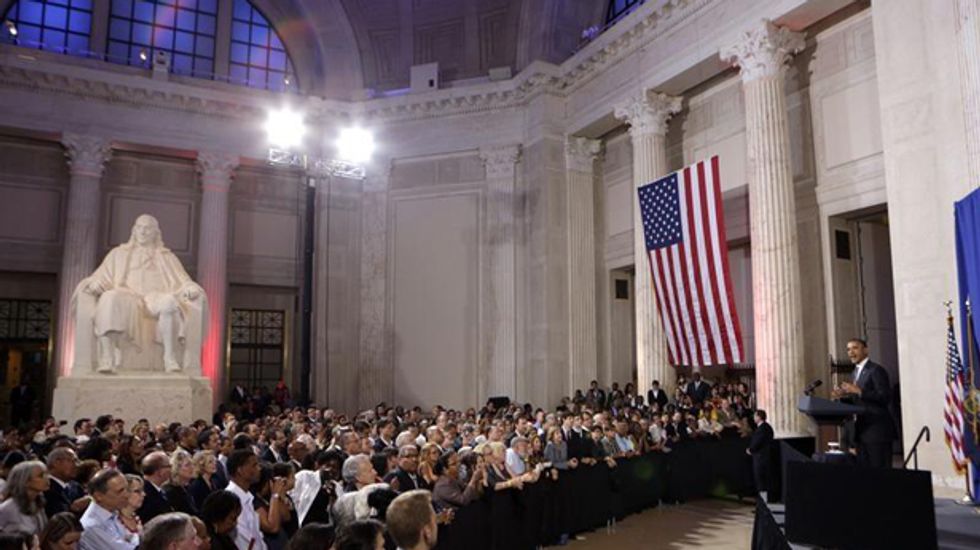 U.S. President Barack Obama speaks at a campaign fund raising event at the Franklin Institute in Philadelphia, Pennsylvania, June 12, 2012. The statue in the room is of Benjamin Franklin. REUTERS/Kevin Lamarque

WASHINGTON (Reuters) - A U.S. Supreme Court ruling that struck down the overall cap on federal election contributions is sending ripples across American politics, as states have begun backing away from their own restrictions on donations and lawyers are forecasting a new wave of challenges to campaign finance laws nationwide.

The court's 5-4 ruling on Wednesday was unsettling for many Washington fundraisers, donors and lobbyists who were comfortable with federal rules that had limited total donations to candidates and party groups to $123,200 in the 2014 election cycle.

Now, thanks to the court's decision in McCutcheon v. Federal Election Commission, donors who are able to give millions of dollars to candidates and their parties will see their influence expanded - much as it was by a 2010 ruling that inspired the creation of independent "Super PACs" and other groups that could receive unlimited donations.

Both rulings are part of a series of decisions by the conservative-led Supreme Court that have given big-money donors more influence in U.S. elections.

Republicans, who generally favor lifting finance limits, have praised the rulings as a boost to political free speech. Democrats, who typically argue for tighter restrictions based on concerns that the wealthy otherwise could have undue influence over American politics, have criticized the court's ruling.

On Thursday, there was a sense in both parties that Republicans and other boosters of free spending in elections not only were winning the legal war over campaign finance, but were likely to keep winning it.

The Supreme Court's ruling a day earlier dealt with federal election laws, but 12 states and Washington, D.C., also have some type of contribution limits to candidates and parties that could be challenged.

In Maryland, which has limited donations to party committees in state elections to $10,000 every four-year election cycle, state regulators already have told election lawyers that they will stop enforcing the limit, said David Mitrani, a lawyer who specializes in campaign finances cases.

Massachusetts officials also said they would stop enforcing the state's limit on candidate donations, but are reviewing a limit on contributions to political parties.

Other states with such limits almost certainly will face lawsuits challenging the limits, Mitrani said.

Burchfield said that he and others who are part of a "merry little band of constitutional lawyers who work in this area" envision a range of potential challenges to federal campaign finance limits, including restrictions on spending by political parties.

A key question hanging over the campaign finance war is whether the most fundamental contribution limits in U.S. politics - those that restrict what an individual can donate to a single candidate ($2,600 per election) or a political party committee ($32,400 per election) - might be in jeopardy.

James Bopp, another election lawyer who specializes in cases challenging campaign finance laws and was involved in Wednesday's case, said he believes there are legal grounds to go after the individual limits.

'FAR ABOVE MY HEAD'

Bopp, who is based in Terre Haute, Indiana, joined lawyer Dan Backer in representing Shaun McCutcheon, a conservative Alabama businessman who sued the FEC because he wanted to give the maximum allowable donations to more candidates and party groups than the federal cap of $123,200 would allow.

The Republican National Committee and McConnell joined the case in support of McCutcheon.

In Wednesday's ruling, the Supreme Court's conservative majority said the "aggregate" limits on contributions to candidates, parties and political action committees violated the First Amendment of the U.S. Constitution, which protects free speech. The majority rejected the argument that the limits are needed to prevent corruption of elections.

Analysts characterized the ruling as undoubtedly good for wealthy donors who can give millions of dollars to candidates and political parties.

But it might not be so good for donors who are wealthy enough to have given candidates and political parties up to the maximum of $123,200 for the 2013-14 election cycle, but are not able or inclined to give even more.

"I used to be able to be finished at $123,200," one major Democratic donor said of his total political contributions for a two-year election cycle.

"That was pretty much a lot, and it was a nice feeling when I was done," the donor said. "Now I guess the limit is $3.5 million or something, which is so far above my head it's ridiculous."

Many Washington lobbyists who are fundraising targets of campaign and parties fall into this category of donors who have a tradition of giving the legal maximum, but cannot match the spending by high-profile billionaires such as Charles and David Koch, who have spent hundreds of millions of dollars funding independent political groups that support Republicans.

"For those (lobbyists) on K Street that thought they were doing a good job of fundraising, they now could be somewhat marginalized under this new system that's dominated by those even wealthier," said Jim Manley, a senior director at QGA Public Affairs and a former longtime aide to Democratic Senate Majority Leader Harry Reid.

One clear winner from Wednesday's ruling will be the political parties and their committees, whose sudden ability to take in seven-figure donations will boost their status relative to the Super PACs and nonprofit groups that already are pumping out TV ads for the November 4 elections.

Charlie Spies, a Republican lawyer who co-founded Restore Our Future, the Super PAC that backed Mitt Romney in the 2012 presidential election, said empowered parties could be a good thing in presenting both sides of political issues.

"You'll be strengthening political parties, and that probably leads to more moderated discourse, because parties tend to be more responsible actors than more short-term, outside groups," Spies said.

David Bossie, president of Citizens United, the conservative advocacy group whose lawsuit led to the 2010 court ruling that paved the way for unlimited spending and fundraising by independent Super PACs and nonprofit groups, agreed.

"Candidates will be able to raise a few more dollars. But the Democratic and Republican Party committees will benefit."