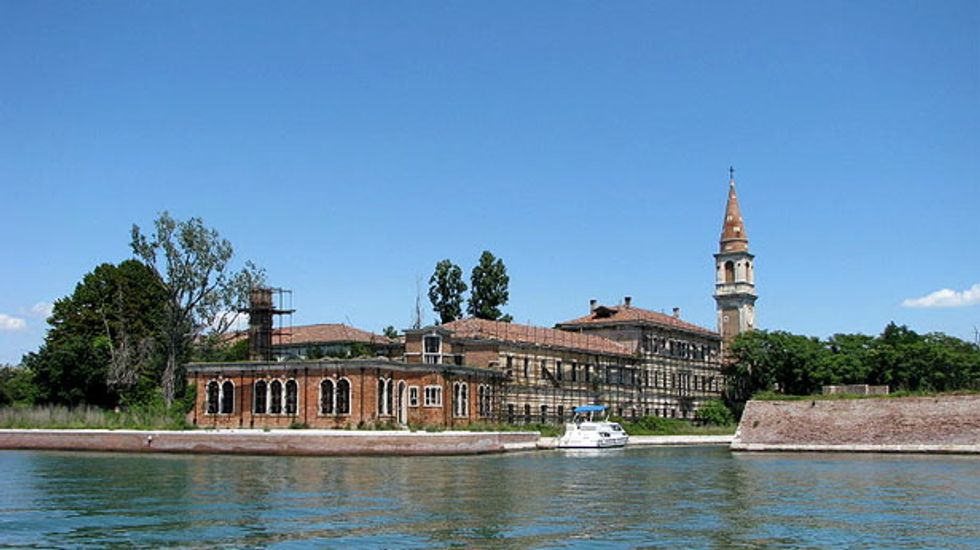 Andrea Barina, the owner of a no-frills restaurant on the Giudecca canal, serves up mouth-watering plates of seafood antipasti and exquisitely fresh fish to a loyal clientele. But, one night earlier this month, the genial 50-year-old was confronted with an idea that was profoundly indigestible: the potential transformation of his beloved teenage playground into yet another luxury resort in the Venetian Lagoon.

Barina, and many of his neighbours, were indignant when they heard of the Italian state's intention to auction a 99-year lease on Poveglia island as part of efforts to ease its huge public debt. Overgrown and deserted, Poveglia is an unlikely paradise. It does not feature in many tourist guides, and its eerie state of abandonment has fed many a ghoulish fantasy.

But, to a committed band of locals, none of that matters; its name alone evokes the simple pleasures of childhoods past. And when Barina, amid heated debate at his restaurant, had an idea, they were inspired. "He said, 'let's buy it," recalls Lorenzo Pesola, an architect. So that's exactly what they are trying to do – €99 (£80) at a time.

It may seem an ambitious plan – and, to those who have read about Poveglia beneath any number of lurid headlines, downright odd. Owing to the potent mix of its colourful past and gloomy present – it has been officially off-limits to the public for decades – the 7-hectare (17-acre) island has attracted a reputation to rival any horror movie set.

A US television show, Ghost Adventures, branded it "one of the world's darkest epicentres" after a 2009 episode in which one of its hosts claimed to have been possessed while clambering about at night in the ruins and hailing the spirits in bad Italian. Subsequently, Poveglia has been described as "the world's most haunted island", "the island of madness", and, for good measure, "like hell, but in Italy".

Strangely enough, this doesn't appear to put off the Poveglia Per Tutti (Poveglia For All) association. In fact, its members appear to find the rumours mildly entertaining, if perplexing. "This anglo-saxon tradition of ghosts is una cazzata [bullshit]," says Pesola. "It's nonsense."

Yes, say the activists who want the lease, Poveglia was used in the past as a lazzaretto – a quarantine station for the sick, particularly plague victims – but so were other islands. And yes, there was a nursing home, which still stands, dilapidated and partially roofless, amid the undergrowth. But that, they insist, is that.

There is "no objective confirmation" of any of the rumours and legends surrounding the building, says Pesola: chiefly, that it was used as a place to conduct experimental lobotomies on psychiatric patients and that its land is stalked by the spectres of victims past. They don't want potential donors to be put off by folklore. And for them, the island's more recent history is what counts.

"What people would often do was go where the water was very deep and fish for little squid. Then, they'd go in little groups, secretly, onto the island, and would grill and eat them," says Barina. "Another thing that was unmissable: there was a wooden bridge from which we'd hold diving contests. There'd be 30, 40 of us. And we'd go and steal the peaches from the trees, which were" – he pauses to pay due reverence – "the best peaches in the whole lagoon."

Were they never spooked by the desolation of the island, with its bricked-up steeple (Napoleon did for the church) and unkempt wilderness? "Absolutely not. It was our playground," says Barina. "It was our Disneyland."

In 21st-century Venice, no reference to the Californian theme park is accidental; the citizens' battle for Poveglia makes more sense when considered alongside the city's wider identity crisis and the ever-tightening grip of mass tourism.

These locals despair of what has happened to parts of the historic centre, the areas around St Mark's square and the Rialto bridge, which have become a morass of tour groups and souvenir shops.

Even on their way to Poveglia, they cannot ignore the industry's impact: the journey takes them past two other lagoon islands, Sacca Sessola and San Clemente, which have both been bought by private investors for use as luxury hotel resorts.

But, in making their bid, weary Venetians have surprised themselves by resisting, says Annapaola Passarini, one of the activists. "I think a lot of people had the sense that Venice was lost, or is for sale in many cases. Some of the comments on the [group's Facebook] page were: 'Finally. We didn't think the Venetians were thinking about the city anymore.'"

Out of the wilderness of Poveglia, the group wants to turn it into a recreational space, vowing to keep two-thirds accessible to the public for activities such as camping, sailing and picnicking, and ensuring the remaining third be used for "entrepreneurial activity" in line with the principles of the wider lease bid.

"This doesn't mean they have to be making fishing nets by hand," says Pesola, an architect, "but it means that they are respectful of the [island's] tradition".

So far the project has won considerable local support and the tentative backing of Venice's centre-left mayor, Giorgio Orsoni, who was quoted as saying Venetians already had "too many luxury hotels" in the lagoon and didn't need another.

With more than 7,000 Facebook supporters, the group has seen some financial success; three hours after opening the donation process last Wednesday, it already had the €20,000 necessary to take part in the 7 May auction organised by government agency Demanio.

But whether it will be able to raise enough money to see off big, private rivals remains to be seen. Should their bid fail, they will give the money back.

The activists want to galvanise support not only among neighbours, but also those abroad who have "a certain idea" of Venice and its lagoon and care about their future. "The chance of visiting a real Venice 10 years from now, rather than just a crystal image of it. That's what they would be supporting," says Pesola.

"There is a kind of caricatural image of [Venice], which has been superimposed on a real city," says Giancarlo Ghigi, a computer technician and another member of the association. "Maybe the only real ghost is the real city, which had seemed dead, but which is emerging."