Why isn't there a Neil deGrasse Tyson for the humanities? We blame Camille Paglia 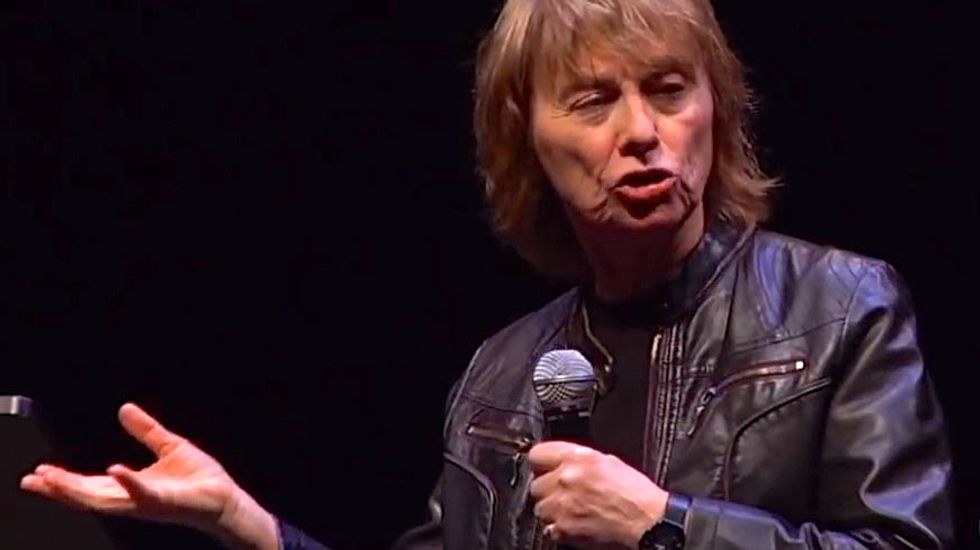 Last week, Adam Weinstein asked on Gawker: Where Is the Humanities' Neil deGrasse Tyson? Coming on the heels of Nick Kristof’s badly-framed and much-derided call for professors to speak more broadly and openly to nonacademic audiences (as if we don’t already do that, every chance we get), Weinstein’s question was easy to misframe and deride. Also, it was on Gawker, so it was all the more tempting for academics to dismiss, as if it were a “which obscure humanist are you?” quiz on Buzzfeed.

But it’s a very good question, and Weinstein asked it as someone who believes in the humanities. Laments about the decline of the humanities are one of the few growth areas in the American intellectual economy, so why shouldn’t there be a “Cosmos”-like show devoted to explaining what’s been going on in the humanities for the past thirty years, and why it matters?

And it’s not about undergraduate enrollments, or high school, or grade school. Tyson happens to be entirely right about who needs shows like “Cosmos”:

The challenge has been adults... All the adults are saying, "We need to improve science in the world. Let's train the kids." I've never heard an adult say, "We need more science in the world. Train me." I've never heard an adult say that. It's the adults that need the science literacy, the kind of literacy that can transform the nation practically overnight.

But the same argument could be made, a fortiori, about the humanities– on behalf of all the people who don’t use sentences with “a fortiori” in them. The humanities are, after all, about human cultures and histories; and in recent years, they have also been about the boundaries of the human (in relation to animals, artificial intelligence, and the ecosphere) and facets of being human that had long been underacknowledged (in queer theory and disability studies and the medical humanities). It’s really quite fascinating stuff, and I don’t say this because I’m a humanities professor. Quite the contrary: I became a humanities professor because this material is really quite fascinating stuff.

As Weinstein notes, Tyson is but the most recent (and perhaps the most entertaining and quotable) in a line of figures that includes Brian Greene, Bill Nye, Richard Feynman and Carl Sagan. What’s interesting about some of these figures– I would include Stephen Hawking, for A Brief History of Time– is that they tend to work in some of the most arcane and recondite areas of scientific research: quantum mechanics, string theory, the physics of black holes. But they know how to present such mysteries to nonspecialists; in The Elegant Universe, Greene leaves the equations in the footnotes for the “mathematically inclined reader” while explaining why a point (non-string) theory of space is problematic in terms even I can understand (it involves discrepancies between general relativity and quantum theory). Deconstruction and postcolonial theory and debates about the philosophical and political status of universalism are not harder to understand than 11-dimensional string theory. So why doesn’t someone give it shot?

I have a confession to make: when I was starting out 25 years ago, I thought I could do it. I know, I know, I was delusional, I was grandiose. But I’d written long explanations and analyses of postmodernism and cultural studies for a couple of issues of the Village Voice Literary Supplement, and back then the VLS had a national circulation of nearly a million, and I got a lot of very encouraging responses. So I titled my second book– a book of essays in the VLS vein– “Public Access.” Silly me: I published it with Verso, a small British imprint well-respected in academic left circles but not often to be found in bookstores, and it sold maybe two thousand copies. And then I watched helplessly as the first major humanities rock star of the 1990s emerged. Her name was Camille Paglia.

Perhaps Paglia is one of the reasons we humanists are leery of huge crossover success. Paglia made her name by arguing that women are too different from men, so there, and by permitting feminists to think sexy thoughts again, which Andrea Dworkin and Catharine McKinnon had totally forbidden them to do throughout the 1980s. She accumulated a legion of fanbois thrilled that a woman was allowing them to listen to the Stones and getting their girlfriends to think sexy thoughts. And then she gradually became the WTF lightweight and all-purpose contrarian we know today.

There are far more intellectually substantial crossover successes in the humanities– one thinks of Judith Butler, whose Gender Trouble caused such a stir that for a while there was a queer fanzine about her (the first queer fanzine about a philosopher since Thomas Aquinas, and Butler was not amused), or Slavoj Zizek, star of the film Zizek! (when you are a film with an excalamation point, you are definitely a star), who veers between brilliant analyses of Hitchcock and Marxism and sweeping all-purpose contrarianism in the service of whatever is hating liberalism this morning. Or perhaps Stanley Fish, who parlayed his formidable talent for rhetorical legerdemain into a New York Times column that veered between brilliant analyses of academic freedom and (guess what) all-purpose contrarianism.

I might also mention Stephen Greenblatt and Henry Louis Gates, Jr., each of whom has become a staple of literate-general-readership. Why, Gates even had a hit show on PBS! Too bad it wasn’t about the humanities. But there is a significant difference between figures like these and figures like Tyson or Sagan. When Butler, Zizek, Fish, Greenblatt, or Gates go popular, they do so for their own work. They are not writing books like Greene’s, which attempt to synthesize and popularize a wide range of research in physics and cosmology. They are not attempting overviews of the humanities as a whole. But why not?

Well, it’s not their job. Increasingly, that job seems to be assigned (or consigned?) to people like Martha Nussbaum. Helen Small, Oxford English professor and the author of the very interesting (and succinct!) volume, The Value of the Humanities, calls Nussbaum’s earnest defenses of the humanities the “Democracy Needs Us” school of thought. And when people start talking about The Humanities in this way– in the aggregate, and as a civic good, they tend to get kind of high-minded and vague and emphatic, and the prose starts to look like the stuff of liberal-arts-college brochures.

But there’s another way to think about this, I hope. There are people out there who are familiar with a wide array of work in the humanities, and who can present it without getting too pedantic. I know because I deal with them all the time: they are directors of humanities centers, and they see it all.

In my own humanities institute, for instance, I have one postdoc whose project is on the history of dance in twentieth-century Iran, and one postdoc who is working on the history of recorded “nature” sounds from early bird songs to the sonic boom. My faculty residents this semester are working on the US food industry since 1945; Berlin and the new European city; the rule of the Almoravid dynasty in eleventh-century northwest Africa and Spain; and debates over BDSM among black women. All across the country, academic humanities institutes are like this: they house anywhere from five to fifty fascinating projects ranging from the most highly specialized (did you know about the Almoravids? I didn’t) to the most broadly intelligible (yes, even as you read this, someone is writing about Lady Gaga). And don’t even get me started on why people know about “gay pride” but haven’t heard about queer shame/ nostalgia/ optimism and any number of other queer-affective relations to the world (short answer: ambivalence about becoming mainstream), or why the history of U.S. immigration is also the history of ideas about disability (short answer: because Ellis Island was all about discerning the real or putative physical and cognitive disabilities of immigrants who might prove to be “burdens” on the state).

Right now, hundreds of humanists are working on the debate about the “Anthropocene” epoch– a debate that began in the sciences, and that raises the question of whether human activity on the planet has reached the point at which we are fundamentally changing the physical conditions of the biosphere, through climate change and mass extinction (spoiler alert: we are). What does that have to do with the humanities? You could ask Dipesh Chakravarty of the University of Chicago, whose 2009 essay “The Climate of History: Four Theses” argued that the Anthropocene deranges the nature-culture division of labor by which the sciences and humanities have organized themselves over the past three thousand years. Or you could ask Ian Baucom of Duke University, who is following this suggestion wherever it may lead– and who just happens to direct Duke’s John Hope Franklin Humanities Institute.

Every humanities-center director has to be something of an impresario, if only to try to understand something about the bewildering breadth of work going on around her. I think of Jim Chandler at Chicago, Wendy Wall at Northwestern, Sara Guyer at Wisconsin, John McGowan at North Carolina, Kathy Woodward at Washington, Victor Bailey at Kansas, Teresa Mangum at Iowa, Dianne Harris at Illinois – each of them has to survey fields that run from philosophy to anthropology to comparative literature to science studies, and each of them has to try to come up with some kind of synoptic view of what’s been going on in the humanities for the past thirty years, and why it matters. Often enough, they have to explain all this to various nonspecialist audiences, from undergraduates to local-community members to alumni and donors. I don’t know how any of them would feel about hosting the humanities’ answer to “Cosmos,” but that’s the talent pool people should be looking at. It would also include Matti Bunzl, director of the huge, annual, perennially terrific Chicago Humanities Festival, and an impresario among impresarios.

It occurs to me that the National Humanities Center is looking for a new director. Geoff Harpham, who directed the NHC for many years, would make a great host for this PBS show– shall we call it “Human Natures,” to play on the humanities’ well-earned suspicion of the idea of a single human nature?– and not least because he has a compelling baritone and looks a little like Leonard Nimoy circa 1985, with a salt-and-pepper beard. Every year, Geoff oversaw forty-odd scholars working on forty-odd things, and he started the provocative “On the Human” series that opened conversations between the humanities and the sciences. He also found time to write The Humanities and the Dream of America, published in 2011. I don’t know what his plans are after he steps down. Perhaps some intrepid producer should give him a call. You never know– he could become the humanities’ answer to Neil deGrasse Tyson.

And hey, if Geoff’s busy, I could always try to do something for the local public access channel.