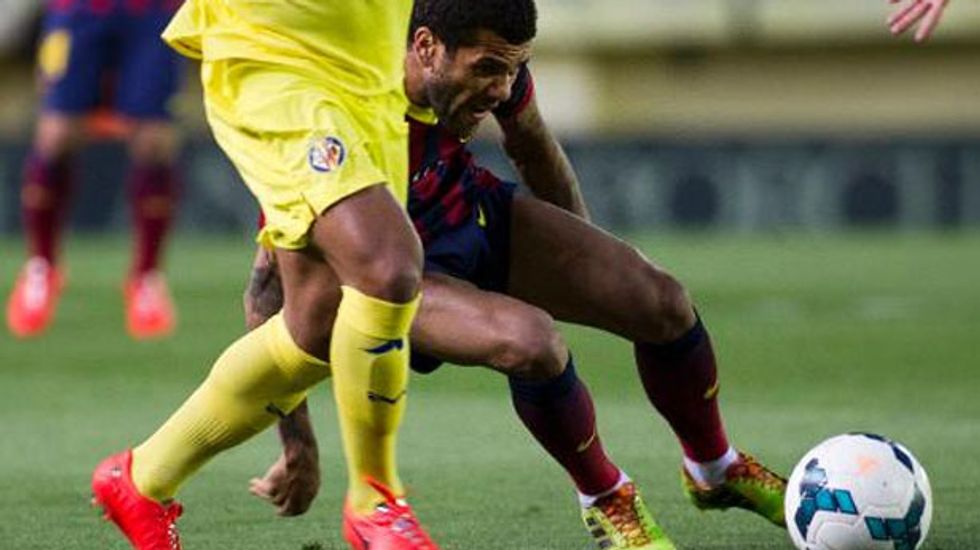 A spectator -- who has since been identified -- threw the banana onto the pitch near the 30-year-old Brazilian international as Barcelona played at Villareal on Sunday night.

Alves won praise for his reaction, picking up the banana to take a bite before getting on with the game and setting up a goal in Barcelona's dramatic come-from-behind 3-2 victory.

There have been several racist incidents in Spain -- Alves has personally suffered several during more than a decade, first with Sevilla then Barcelona.

"The player Dani Alves gave a daring and strong response to racism in sports," Brazil's President Dilma Rousseff said in a series of Twitter messages. Such racism had become "unfortunately common," she added.

Blatter also reacted on Twitter on Monday, saying: "What @DaniAlves2 tolerated last night is an outrage. We must fight all forms of discrimination united. Will be zero tolerance at #World Cup."

Barcelona issued a strong message of support for Alves, who is likely to be a key player for World Cup hosts Brazil in June.

"FC Barcelona wishes to express its complete support and solidarity with our first team player Dani Alves, following the insults he was subject to from a section of the crowd at El Madrigal on Sunday during the game against Villarreal," said the club in a statement.

Villarreal themselves released a statement expressing their "absolute rejection of any act" of "violence, discrimination, racism and xenophobia."

"Villarreal CF wants to communicate that the club deeply regrets and condemns the incident that happened...during the match against FC Barcelona in which a fan threw an object onto the field of El Madrigal," they added.

"The club has already identified the author and has decided to withdraw his season tickets, permanently banning his access to El Madrigal."

After Sunday's game, Alves said: "I have been in Spain 11 years and it has been the same for 11 years. You have to laugh at these backward people.

"We are not going to change it, so you have to take it almost as a joke and laugh at them."

Team-mates and fans lent public support, including compatriot and clubmate Neymar, who posted a photograph of himself on the Instagram social networking site showing him eating a banana and his two-year-old son hugging a cuddly banana toy.

"We are all monkeys, we are all the same. Say no to Racism! It's disgraceful that such shameful prejudice exists in 2014," Neymar said.

Chelsea's Brazilian stars Oscar, David Luiz and Willian also posted to social media, with Luiz holding a banana, while Manchester City's Argentinian star Sergio Aguero tweeted a picture of himself and Brazilian five-time world player of the year Marta both eating one.

"With my colleague Marta from Brazil we say #NoToRacism. We are all equal," said Aguero.

Football's world and European governing bodies FIFA and UEFA have repeatedly tried to campaign against racism and last November, Blatter said he was "sickened" to see some Real Betis supporters make monkey chants at their own player, Brazilian defender Paulao, in a city derby against Sevilla.

Ghana international Kevin-Prince Boateng walked off the pitch over racial insults made during a friendly between his then club AC Milan and a lower-league Italian side in January last year.

Serbia's under-21 team were ordered to play a match without home fans after their supporters made monkey chants during a game against Belgium on November 15.