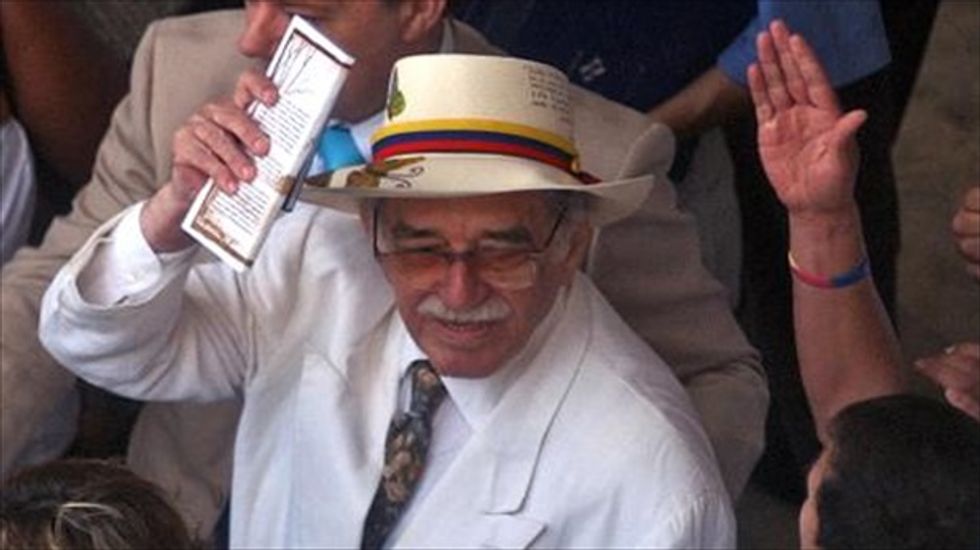 Garcia Marquez, who died Thursday at age 87, was mourned in the European cities where he once lived, the United States and his native Colombia that inspired his surreal stories of family, love and dictatorship.

Known affectionately as "Gabo," the author of One Hundred Years of Solitude had friends in the corridors of power, literary circles and the backstages of the entertainment world.

In Mexico City, where he lived for decades until his death, officials said a public tribute would be held at the Bellas Artes cultural palace on Monday.

Admirers left flowers in front of his house, including white roses sent by Colombian pop star Shakira, with a note saying "My deepest condolences, Shakira."

A 7.2-magnitude earthquake shook the city but the family stayed inside the house.

The author's wife and two sons said his remains would be cremated but his final resting place has yet to be disclosed.

The cause of death was not revealed but he died one week after returning home from a hospital where he was treated for pneumonia.

In a televised address late Thursday, Colombian President Juan Manuel Santos said: "All of Colombia is in mourning because the most admired and cherished compatriot of all time is gone."

The Revolutionary Armed Forces of Colombia (FARC), a Marxist rebel group negotiating peace with the government, said it would seek inspiration from Colonel Aureliano Buendia, a character in "One Hundred Years of Solitude."

"With the departure of this magnificent man, we reiterate today that, like Aureliano Buendia, we dream of, and we will make, peace," the guerrillas said in a statement to AFP.

Garcia Marquez last appeared in public on his birthday, March 6, wearing his favorite flower, a yellow rose, on his lapel, but he only waved and said nothing to reporters outside his Mexico City house.

"He is the most important of all Latin American writers of all times," said Chilean novelist Isabel Allende.

"My maestro has died. I will not mourn him because I have not lost him: I will continue to read his words over and over."

"He really was a one-off and one would really have to go back to (Charles) Dickens to find a writer of the very highest literary quality who commanded such extraordinary persuasive powers over whole populations," McEwan told the BBC.

A champion of left-wing causes, the longtime journalist forged a controversial friendship with Fidel Castro, but he also counted foes of communism like former US president Bill Clinton among his friends.

Cuban President Raul Castro, who succeeded his brother Fidel in 2006, addressed a message of condolences to the writer's wife, Mercedes Barcha.

"The world and particularly the people of Latin America have physically lost an emblematic writer and intellectual," said Castro in the missive published on the Cubadebate website.

U.S. President Barack Obama said: "The world has lost one of its greatest visionary writers."

"His articles as a committed journalist and his tireless battle against imperialism made him one of the most influential South American intellectuals of our time," Hollande said.

In his Nobel speech in 1982, Garcia Marquez said it was the "outsized reality" of brutal dictatorships and civil wars in Latin America, "and not just its literary expression," that got the attention of the Swedish Academy of Letters.

One Hundred Years of Solitude, published in 1967, is a historical and literary saga about a family from the imaginary Caribbean village of Macondo between the 19th and 20th centuries.

Garcia Marquez's other famous books include Love in the Time of Cholera, Chronicle of a Death Foretold, The General in His Labyrinth and his autobiography Living to Tell the Tale.

His final novel, Memories of My Melancholy Whores, was published in 2004.