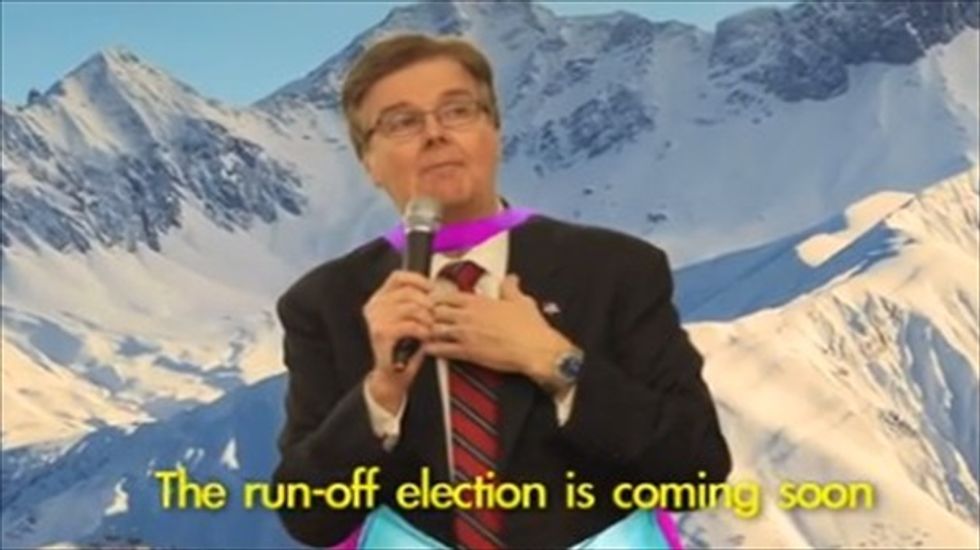 Set to the tune of the song "Let It Go" from Frozen, Dewhurst's ad, "The Ballad of Dannie Goeb," invokes Patrick's birth name to accuse him of keeping secrets from voters. Patrick is challenging Dewhurst for the lieutenant governorship in a May 27 runoff election.

"Won't let them in, won't let them see that I'm a phony disc jockey," the ad states. "I'll try to lie, why should they know? Well now they know."

Besides the sarcastic reference to Patrick's time working as a sportscaster and radio host, the video shows a mock-up of Patrick "singing" before giving way to footage from his prior career, including a shot of a shirtless Patrick having his chest and body painted.

The Dallas Morning News reported that, during a debate last week, Patrick attacked Dewhurst for a separate ad featuring an image of a shirtless Patrick, which did not mention that the photo was taken at a 2010 charity event benefitting disabled children.

"Why did you keep running that ad for five days after you knew it was wrong?" Patrick asked. Dewhurst subsequently apologized for using the photo, but not for accusing him of "stiffing" creditors for $800,000, which was also referenced in the Frozen-themed video.

"I changed my name to cover my past, to cover my bankruptcy," "Patrick" said in the new ad. "Now the voters know my secrets, they know I had unpaid tax liens."

KERA-TV reported that Dewhurst trails Patrick by as much as 20 percentage points in state polls.

Watch "The Ballad of Dannie Goeb," as posted online on Wednesday, below.