Adam Muema, who gave up the NFL for 'Lord Ray-El,' may flee the U.S. for Brazil to go 'ninja' 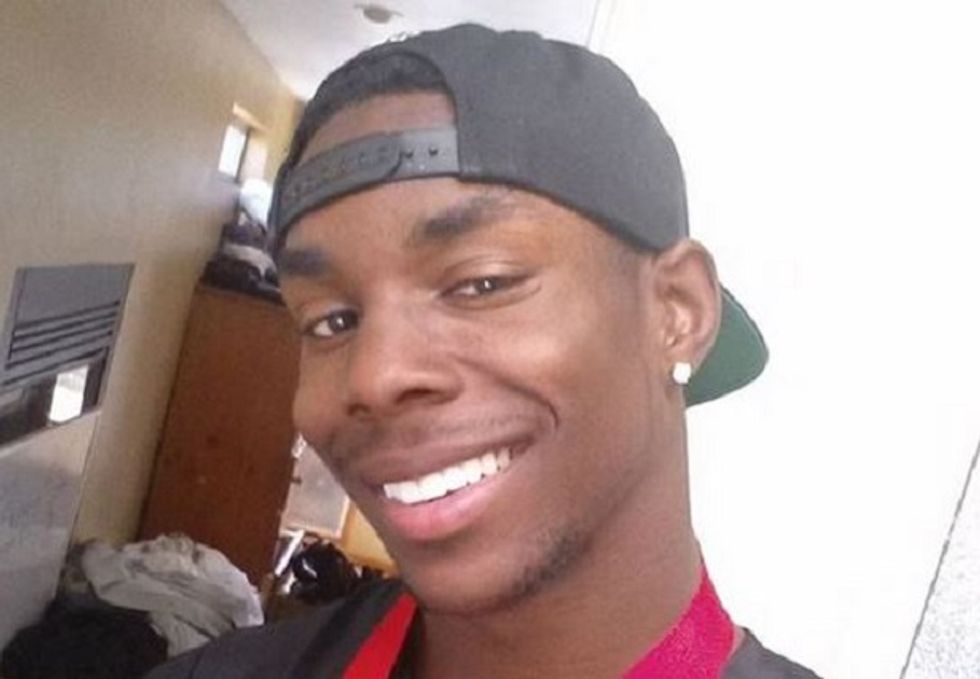 Both Sports Illustrated and ESPN recently published lengthy, well-written profiles of Adam Muema, the troubled San Diego State running back who gave up football to follow an Internet prophet who calls himself "Ray-El."

Both magazine stories cited Raw Story, because we were the first to dig into Ray-El and find out that he is actually a man named Raymond Elwood Howard-Lear, 45, who grew up in the Chicago area, has had some legal troubles, and ran for Congress and governor of Illinois, both with negligible results.

Muema had put up great numbers in his junior year at SDSU and then had declared for the draft, but as the scouting "combine" neared in February, he began posting strange things at his Facebook and Instagram accounts, and then ditched the combine. He was found wandering around the Fort Lauderdale airport, where he had apparently spent three days.

After that, the only interview he gave was to Raw Story, when we had a Facebook conversation with him in March.

ESPN had a brief text exchange with him after that, but neither publication had luck reaching Muema again for their lengthy stories. The SI profile suggested that he might be in Mexico, where Ray-El had called for his followers to gather.

Muema's last posting at Facebook, on May 19, was the photo you see above, with the somewhat ominous caption, "Go out with a smile on your face!"

So we reached out to him again, and once again, to our surprise, he answered. We then engaged in this conversation early Friday afternoon. This is our verbatim Facebook conversation, with only very slight corrections of spelling and punctuation for clarity…

RAW: Are you in Mexico? Is that true? And what did you mean by "going out with a smile"? That sounds creepy.

RAW: I thought you were only a junior?

RAW: Ah. Well, congratulations for graduating. So you're not in Mexico?

Muema: Does it say I'm in Mexico?

RAW: The Sports Illustrated story said that RayEl has called for his followers to gather in Mexico, and it said they thought you had gone there.

Muema: No. His followers were called to flee America. They are all over.

RAW: Is that what you plan to do? Flee America?

Muema: If I don't, isn't that disobedient?

Muema: I want to go to Brazil.

RAW: Nice place, I've heard. SDSU graduation was May 15-18. Did you attend it? The magazines are acting like you've disappeared.

Muema: I was in San Diego that Friday and Saturday.

RAW: Cool. So what's next for you? Brazil? What do you think you'd do there?

RAW: That sounds like fun. And when football season comes around? Is there any chance that you could play a senior year at SDSU?

Muema: No chance. Wouldn't want to, either.

RAW: Is Lord RayEl still predicting an apocalypse? Do you think one is coming soon?

Muema: Ugh, I'm not sure what apocalypse means. 'Soon' is opinionated.

RAW: RayEl talked about a judgment day coming soon, and 'laying waste' in that video you sent me. I thought that was supposed to happen by this Fall, no?

Muema: I believe he said his father would be here soon. That has no date on it.

RAW: I see that. OK, so there seems to be less immediacy. I thought you had said there would be no football this coming season because the end of the world is coming. Maybe I got that wrong.

Muema: I said 'think.' Only the Father knows.

RAW: Are you pulling away from him a little bit? It sounded earlier like you were looking toward him for every move. Now it sounds like you're a little more free to choose your own path? Do I have that wrong?

Muema: I'll make this one loud & clear. But sad to say I have never spoken to Him.

RAW: After all you did to follow his teachings, he never reached out and talked to you? What's up with that?

Muema: I'm not worthy of the presence of Holiness. I am a sinner.

RAW: Oh, come on. Raymond "RayEl" Howard-Lear is just a dude from Chicago with a bad fake accent. Did you read that information I dug up about him?

Muema: I don't flee away from my Lord.

RAW: A trip to Brazil for the World Cup sounds great. But have you thought about how you're going to make a living now that you've finished college and you're not going to play football?

Muema: I will be ninja.

RAW: Does that come with benefits?

Muema: No. It means, go to Brazil and let God.

RAW: Do you have any thoughts about two of the biggest sports news organizations -- Sports Illustrated and ESPN -- writing about you as someone who has lost his way?

Muema: No, because I don't read. 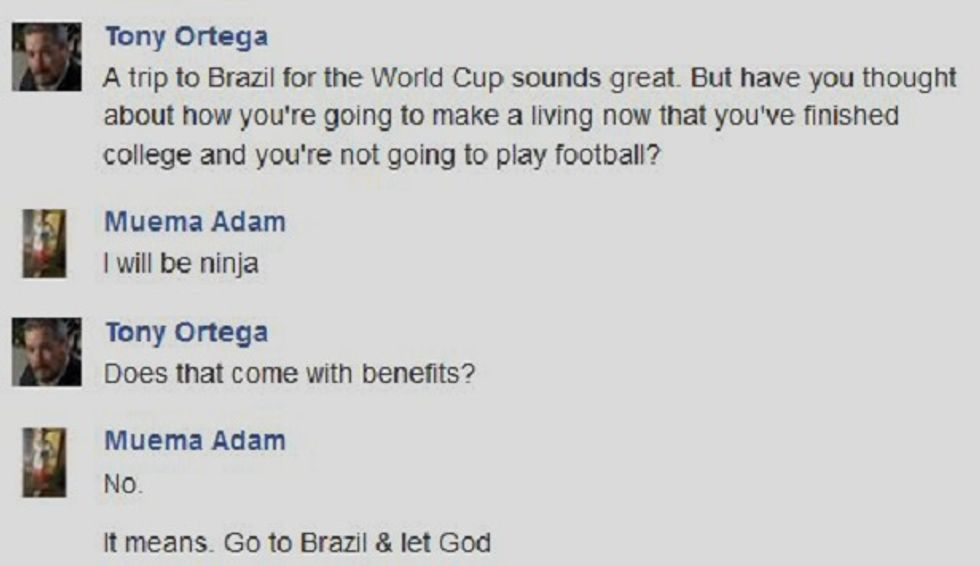 RAW: What do you think about people suggesting you're suffering some mental effects from your head injury that happened a few years ago?

Muema: I have no problem with that. As long as my women love me.

RAW: Got a girlfriend?

Muema: No. I said women.

Muema: I Don't Talk To Them

RAW: So which women are you referring to?

Muema: I trust no one. So I mislead them with false information. The ones I converse with.

RAW: Is there a doctor or a therapist who you trust, Adam? Can I contact them for you? I really think you ought to have a talk with someone before leaving for another country.

Muema: Sure. His name may be referred to as Jesus. Contact him.

RAW: And Jesus is a 45-year-old guy named Raymond Elwood Howard-Lear from Chicago? Is that really very likely?

Muema: No, Jesus is a spirit inside of Him.

RAW: That's not what he says. He says he is the risen Christ.

RAW: So what town are you in today?

Muema: I don't know. What does it say.

Muema: No, that's an hour away.

RAW: My mistake. Orange County. I spent my high school years in OC.

Muema: I got the bubble guts but thanks for sharing.

Well, that answers a few questions, but raises even more. We hope he changes his mind about talking to his family.