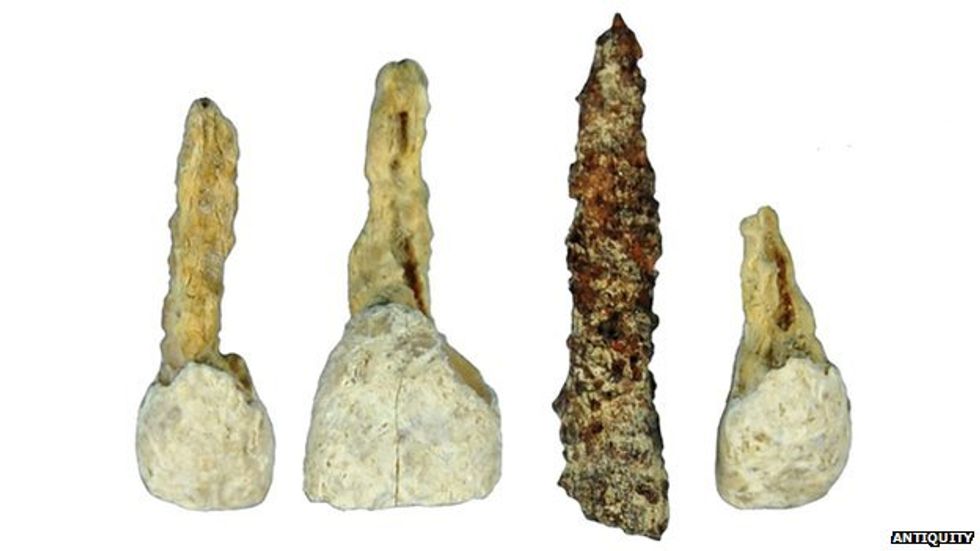 An iron tooth implant fitted about 2,300 years ago has been found in the grave of a young woman in northern France. Archaeologists believe it may have been fitted to beautify her corpse, as it would have been too excruciating to have had it hammered into the living jaw.

The corroded piece of metal is the same size and shape as the other incisors from her upper jaw – which did not survive as the timber tomb collapsed and crushed her skull – and its appearance may originally have been improved by a wooden or ivory covering.

The implant, the oldest of its kind discovered in western Europe, is 400 years older than one from another grave in France, found in the 1990s at Essonne. That unfortunate young man had lost all his top left molars, so the iron implant was probably to help him chew.

The new find replaced the only tooth lost by the woman, which would have caused her no practical problems but would have been very visible.

The French archaeologists, who report their discovery in the June edition of the Antiquity journal, say the discovery was totally unexpected.

Although the Celts were renowned for their craftsmanship in metal and timber, the team says little is known about their medical knowledge before the Romans overran their territories.

The woman was buried in a richly furnished timber chamber, originally surrounded by a wooden fence, near the graves of three other women, at Le Chene, south-east of Paris.

Buried with her were bronze torcs, anklets and bracelets, brooches and belt ornaments, coral and amber necklaces, and an iron currency bar, all in an elaborately constructed burial chamber and enclosure – all signs of wealth "of a refined and ostentatious elite".

The items were found among a small heap of crushed bones, all that survived of the skeleton apart from the perfectly preserved teeth – and the iron implant.

False or replacement teeth have been discovered in skulls from ancient Egypt, including a 5,500-year-old one made of shell, intended to make the body as complete as possible for the afterlife. False teeth made of bone, or recycled animal teeth, were used by elite Etruscan women in Italy, where the Celts had trading connections and may have got the idea.

The archaeologists made some gruesome calculations about how far the spike would have been hammered into the pulp canal of nerves and blood vessels to anchor it soundly.

She may already have been dead when it was done, to improve the appearance of her corpse for the funeral service. If she was still alive it would have been an agonising process, and could have resulted in a fatal infection. "Iron is not biocompatible and the absence of sterile conditions would have provoked an unfavourable host response," said the team of archaeologists.