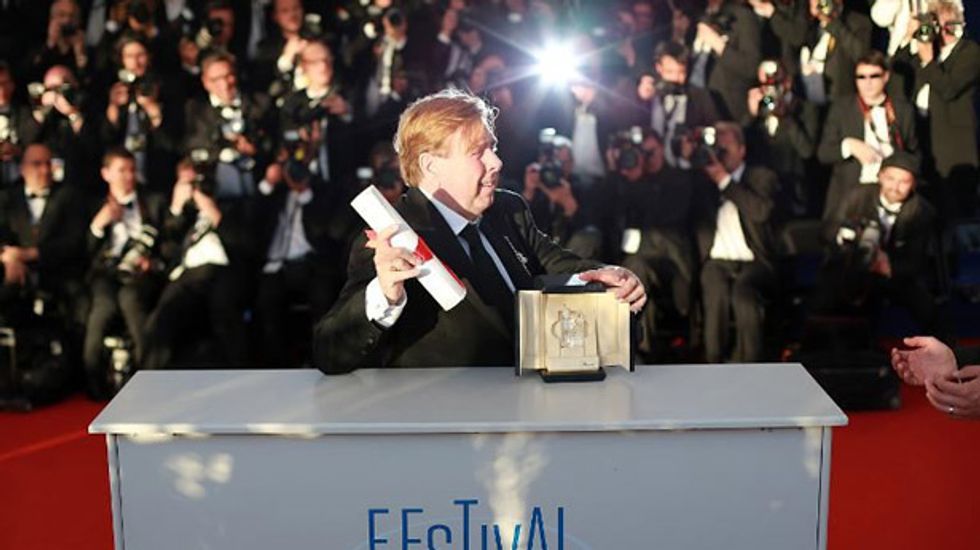 Britain's Timothy Spall on Saturday claimed the best actor prize at Cannes, nearly 20 years after he had to miss the festival because he was diagnosed with cancer.

Spall described himself as "like a bewildered 16-year-old" after scooping the prize for his role as British Romantic landscape painter JMW Turner in director Mike Leigh's historical biopic.

The 57-year-old portrayed the artist credited with blazing a trail for modern art in the early 19th century in a grunting, snorting, spitting, womanising, warts-and-all performance that critics hailed as riveting.

After receiving the prize, an emotional Spall told the audience in the Cannes festival hall he was trying to fight back tears, and lauded his 33 years of collaboration with Leigh.

The actor had been due to come to Cannes in 1996 when Leigh's "Secrets & Lies" -- in which he starred -- won the Palme d'Or but was unable to do so after being diagnosed with acute myelogenous leukaemia and being given just days to live.

Accepting his prize, Spall thanked the festival, the jury and God for keeping him alive.

After the ceremony, he said he had spent most of his life as a supporting actor and that winning had astounded him.

"It is wonderful, wonderful... I am proud, so proud," he said, adding that it was as much for him as for Leigh and the rest of the cast and crew.

Earlier in the day, he said, he had been on holiday on a boat in Holland "with my hand rammed up a pipe" fixing something when the phone rang and he was instructed to come back to Cannes urgently.

"I genuinely couldn't believe it," he said.

For his role as Turner, Spall practiced painting for two years before starting to film with Leigh and said his extensive research revealed Turner to be "a man of mystery".

He told reporters in Cannes earlier that his appearance had for once made him the right fit for a classic leading role.

"The great thing is that what made us a perfect match, apart from anything, is that he was a funny-looking fat little man and so am I," he joked.

"To me what makes the film so wonderful is that it's about how genius is not always in the most romantic of packages. Most geniuses are strange, they do have conflict... they are often odd-looking sociopaths."

One of Britain's best-regarded character actors, and better known abroad for a recurring role in the "Harry Potter" movies, Spall is credited with a gift for invoking empathy with otherwise unlovable protagonists.

Spall first rose to prominence in the mid-1980s on television, as a bricklayer in the popular comedy-drama series "Auf Wiedersehen, Pet".

He played Barry Taylor, a boring, obsessive electrician with a bleak outlook on life, but did so in a way that allowed the audience to retain affection for an awkward character.

Spall was born in Battersea in south London on February 27, 1957, to a postal worker father and a hairdresser mother.

While he was never blessed with matinee idol looks, his acting talent soon became obvious and he trained at the National Youth Theatre and the Royal Academy of Dramatic Art before quickly falling into productions with the Royal Shakespeare Company.

He made his big-screen debut as a projectionist in the film version of The Who's rock opera "Quadrophenia" in 1979.

Three years later, he worked with Leigh for the first time in the television film "Home Sweet Home", playing a lazy postman and beginning a partnership with Leigh that has endured throughout Spall's career.

US director Tim Burton also took a shine to Spall, casting him in "Sweeney Todd: The Demon Barber of Fleet Street" (2008) and "Alice in Wonderland" (2010).