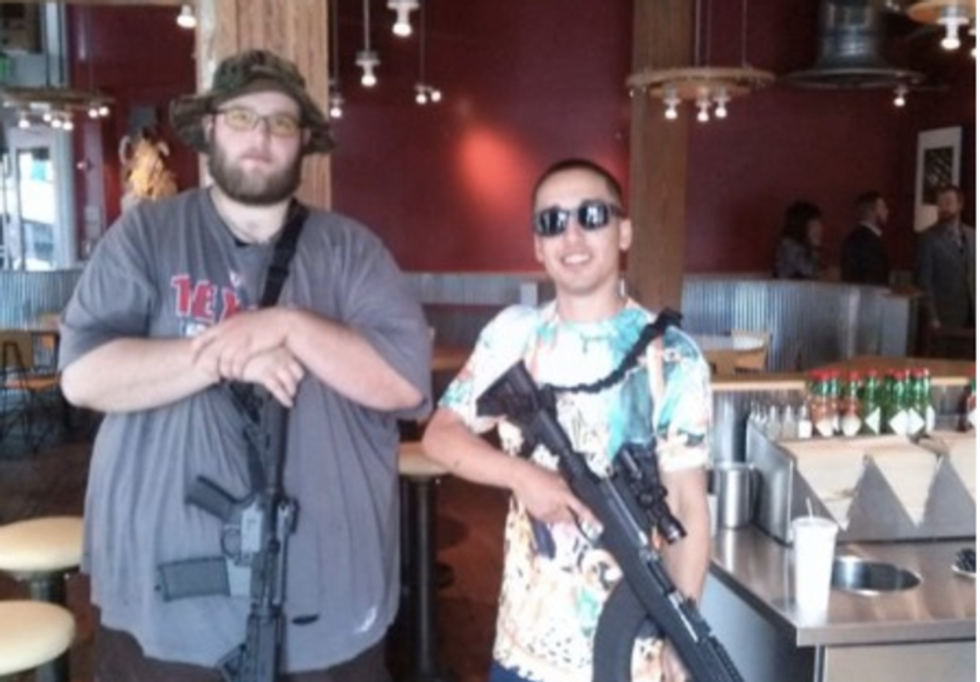 The Chipotle restaurant chain said Monday that firearms are not permitted inside its locations. Talking Points Memo reported that the company released a statement about its no-guns policy after "open carry" activists staged an armed demonstration at a Chipotle in Dallas, TX.

"Recently participants from an 'open carry' demonstration in Texas brought guns (including military-style assault rifles) into one of our restaurants, causing many of our customers anxiety and discomfort," read the statement to CBS Dallas-Ft. Worth. "Because of this, we are respectfully asking that customers not bring guns into our restaurants, unless they are authorized law enforcement personnel."

The company gave a nod to pro-gun advocates, saying that there are "strong arguments" on both sides of the gun rights issue.

"The vast majority of gun owners are responsible citizens and we appreciate them honoring this request," the statement continued. "And we hope that our customers who oppose the carrying of guns in public agree with us that it is the role of elected officials and the legislative process to set policy in this area, not the role of businesses like Chipotle.”

Earlier this month, Open Carry Texas demonstrators showed up unannounced at a Jack in the Box restaurant in Ft. Worth, heavily armed but bearing no protest signs or banners. Restaurant employees thought they were being robbed and barricaded themselves in the walk-in freezer as a manager called police.

The group Moms Demand Action for Gun Sense in America launched a petition asking Chipotle to ban guns from its premises. The group has similarly petitioned Starbucks and other U.S. companies in an effort to keep weapons out of public places.

In an open letter last year, Starbucks CEO Howard Schultz asked customers not to bring guns to its restaurants. He was responding to a series of gun groups' decision to hold "Starbucks Appreciation Days," in which members were encouraged to openly carry weapons at the popular coffee shops.

The pro-gun activists were protesting increased scrutiny of gun ownership in the U.S. that came after 20 children and six adults were gunned down at Sandy Hook Elementary School in Newtown, CT in December of 2012.

"Pro-gun activists have used our stores as a political stage for media events misleadingly called ‘Starbucks Appreciation Days’ that disingenuously portray Starbucks as a champion of ‘open carry.’" said Schultz in September. "To be clear: we do not want these events in our stores."