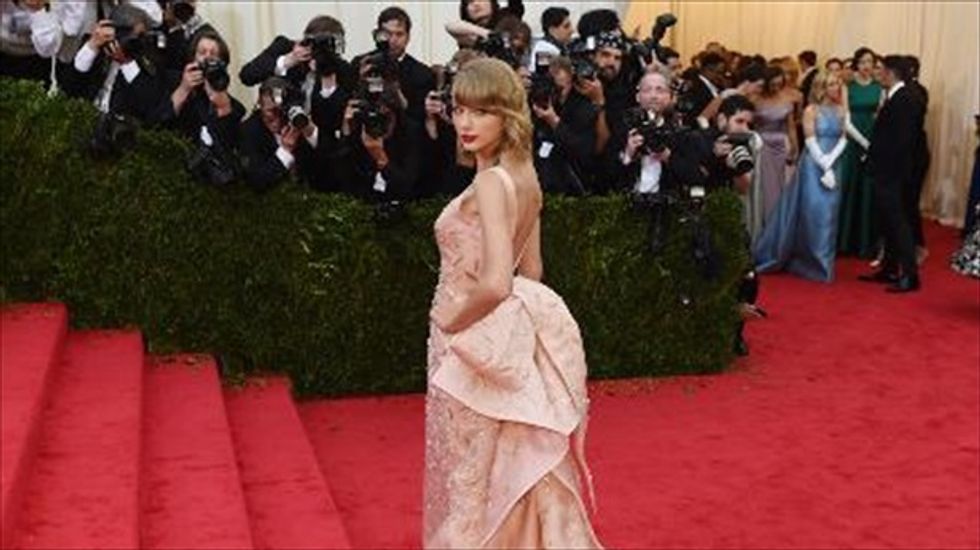 Taylor Swift arrives at the Costume Institute Benefit at The Metropolitan Museum of Art May 5, 2014 in New York [AFP]

Country-pop diva Taylor Swift's fetish for the number 13 is being tested by a California clothing company in a trademark infringement lawsuit filed Tuesday in a greater Los Angeles court.

Blue Sphere Inc. said it had been using "Lucky 13" as a registered trademark for its line of 1950s-themed rock 'n' roll clothes and accessories for two decades before the phrase appeared in 2012 on official Taylor Swift merchandise.

"While Swift’s merchandising and licensing team obsessively focuses on the Swift brand, it ignores the intellectual property rights of others," the company alleged in a 28-page complaint filed at the US District Court in Orange County.

Swift, 24, has long claimed 13 as her lucky number -- drawing it on the back of her hand before concerts, folding it into her @taylorswift13 handle on Twitter, even painting it on the fuselage of her private Falcon jet.

“Basically, whenever a 13 comes up in my life, it’s a good thing," the singer-songwriter -- whose fifth studio album is expected sometime before she turns 25 on December 13 -- told MTV in 2009.

Blue Sphere asked the court for an injunction to prohibit Swift from using the term Lucky 13 on her merchandise, as well as punitive damages, recovery of lost profits and legal fees. It also requested a jury trial.

In 2010, Swift -- who in March topped Billboard's annual Money Makers rich list after earning an estimated $40 million in 2013 -- won her own trademark case against 16 people over the sale of counterfeit merchandise.