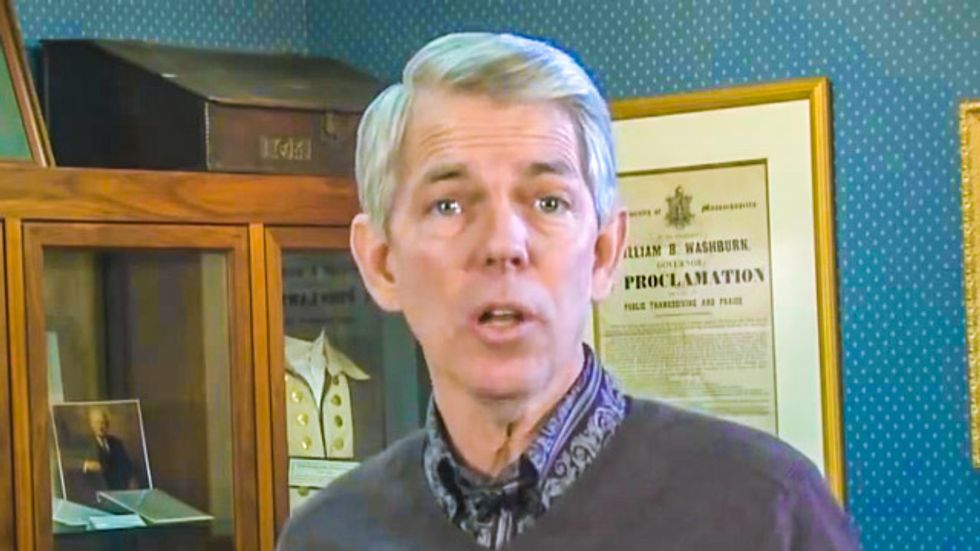 A so-called "historian" who Glenn Beck hired to teach at his online university insisted this week that women had originally been denied the right to vote "to keep the family together," and for the good of "the entire culture and society."

On the Thursday broadcast of Wallbuilders Live, David Barton explained that biblical principles -- and not sexism -- were behind not allowing women to vote prior to 1920.

"So family government precedes civil government and you watch that as colonists came to America, they voted by families," he said. "And you have to remember back then, husband and wife, I mean the two were considered one. That is the biblical precept... That is a family, that is voting. And so the head of the family is traditionally considered to be the husband and even biblically still continues to be so."

Barton argued that in the time since the women's suffrage movement succeeded in the United States, "we've moved into more of a family anarchy kind of thing."

"[T]he bigotry we're told they held back then, they didn't hold," he said. "And what they did was they put the family unit higher than the government unit and they tried to work hard to keep the family together."

"And, as we can show in two or three hundred studies since then, the more you weaken the family, the more it hurts the entire culture and society."

In conclusion, Barton asserted that denying women the right to vote was necessary for "a strong culture, a strong society, and it was based on a strong family that preceded government. And they crafted their policies to protect a strong family."

Listen to the audio below from Wallbuilders Live, broadcast May 1, 2014.