Colbert: Antonin Scalia has been thinking about lesbian threesomes since 2003 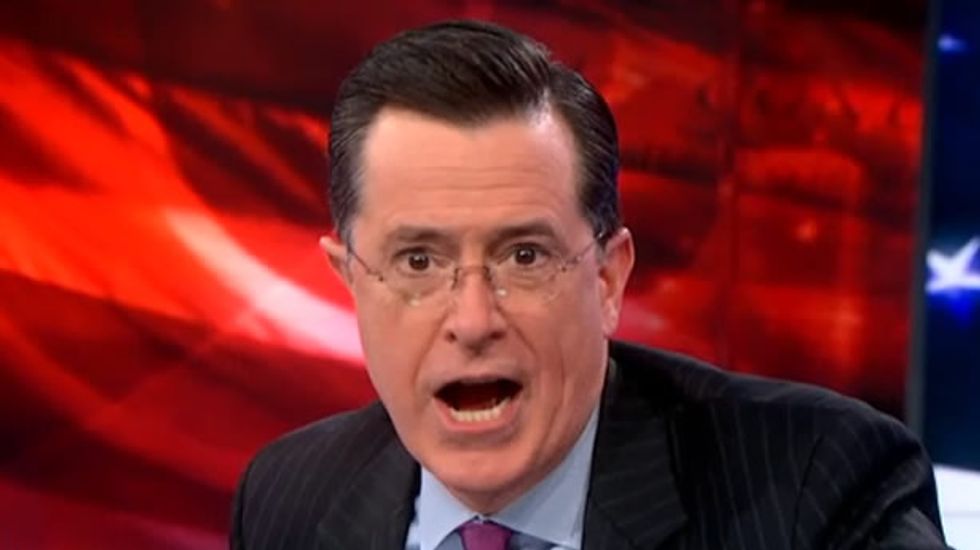 "In Massachusetts," he began, "a lesbian trio claim to be married, calling themselves the world's first 'throuple.'"

"Excuse me," he said, holding his hand to his face. "I just 'throupled' a little in my mouth. This is a massive affront to traditional marriage. It's 'Adam and Eve,' not 'Madam and Eve...and Shelia."

"Worse, it's an affront to traditional threesomes, which is a wedge that drives straight couples apart after what was supposed to be a fun birthday present inevitably leads to crying whenever someone hears the name 'Stacy.'"

"Now," he continued, "you may ask yourself, why am I reporting on this? Well, because 'throuplehood' is clearly an epidemic spreading from Massachusetts to several articles about this happening in Massachusetts."

"I agree with definitely-not-a-lesbian Todd Starnes," Colbert said, "who recently Facebooked that 'When you redefine marriage -- it's anything goes. And with the Washington Times editorial board, who recently editorialized that 'this was foretold...when the Supreme Court eviscerated authentic marriage last year."

"Yes," he agreed. "It's a slippery slope: sodomy leads to gay marriage, which leads to 'throupling,' which inevitably leads to 'threestriality,' 'five-nication,' and whatever word they come up with for one dude and ten snakes in a box."

Watch the entire April 30, 2014 episode of The Colbert Report via Hulu below.