"If you watch the news," Colbert began, "you know that we're in the middle of the 2014 primaries, where candidates are fighting for voters approval -- so they can go to Congress and lose it immediately."

After noting that Tea Party candidates ran against "country club conservatives" and lost in Ohio, Indiana, and North Carolina, he discussed the race in Florida's Third District, which the Tea Party can't lose -- because they're the only ones in it.

"Jake Rush," Colbert continued, "is everything you could want in a Congressman -- and maybe more than you do."

He then cuts to a clip in which a Good Day LA hostess calls Rush "a conservative straight shooter -- but guess what? He happens to be a vampire." 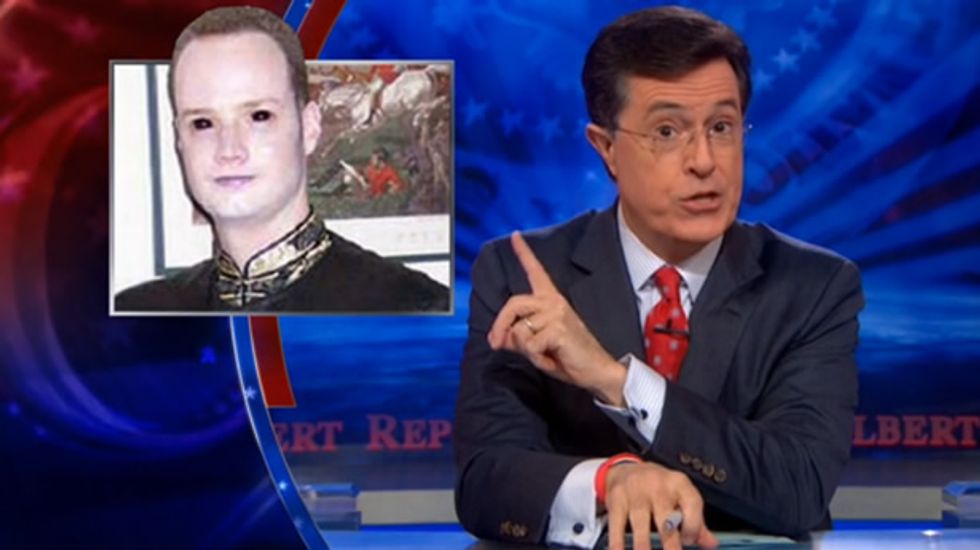 "As a malevolent Lord of the Undead who has just had his eyes dilated by an incompetent ophthalmologist."

Colbert explained that Rush is "deeply involved in 'Live Action Role Playing,' or 'LARP.' 'LARP' is also the sound his campaign manager made when he saw" the picture above.

Other characters Jake Rush plays include "Lord Staas Van Der Winst" and "Archbishop Kettering, who was born in 1146 -- making him younger than many Florida voters."

Colbert then interviewed Rush for a "Better Know a Challenger" segment. The interview, along with the entire May 8, 2014 episode of The Colbert Report, can be seen via Hulu below.