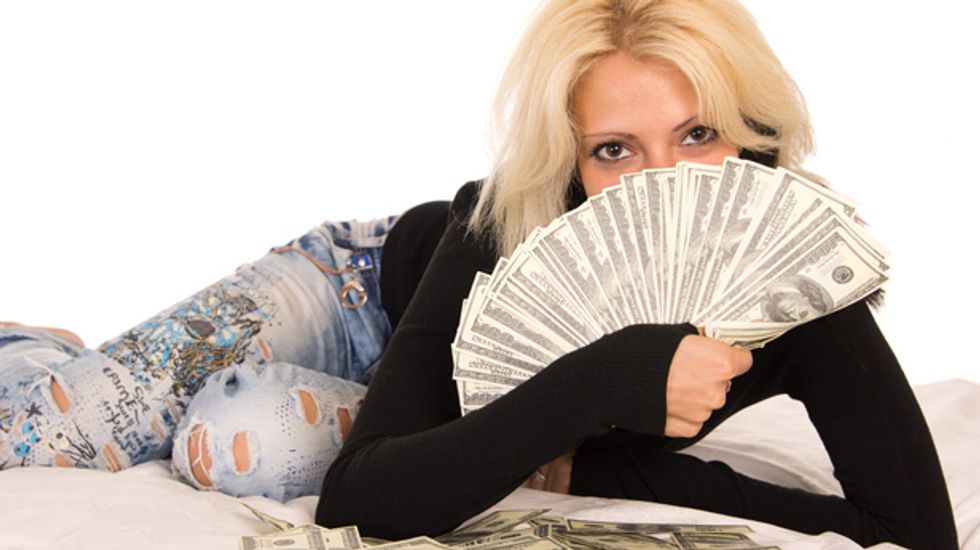 You undoubtedly have misty water-colored memories that reach way way back to the Year of Our Lord 2012 when Republicans declared War on Women because ladies were all needy all of the time with their freakish lady plumbing and crazy hormonal talk about wage disparities and income inequality and not wanting to be raped and such and such. Republicans responded with:  'chill out babes, find yourself a man and make babies and, hey, can we prod you with this trasvaginal freedom wand?'

It seemed that conservatives had binders chock full of ideas about how to fix what ailed the gals, most of them tried and true methods developed during the 1950's when men were men and women were women and you could sit at a lunch counter and have an egg cream without bumping shoulders with a future president of the United States who was uppity enough to think he should get service too. Good times, good times.

In War on Women v1.0, the GOP set about saving America from sluts like Sandra Fluke who demanded that  taxpayers pay for their whore-pills, communist rabblerousers like Lilly Ledbetter who thought women should be paid the same as a man for doing the same job, and ladies who didn't want a bunch of pasty white men in grey suits getting up in the girl grills with a baby flashlight.

Also, too: rape, what's the big deal, ladies? Just lie back and enjoy it and then use your magic lesbian witch powers to not get pregnant, but if you do: tough titty and, besides, it's a gift from Jesus.

So, yeah conservatives certainly had their hands full of babe booty in those days, when the wimmin's were all gimmee-gimmee-gimmee, me me me.

Fast forward a  year or so later and the sisters are doing it for themselves;  pulling themselves up by their own slingbacks and making bank. So long Needy Nellie, hello Big Bucks Beyoncé.

According to people who say things on GOP-messaging shop Fox News, if a lady makes more than her man, she might as well just cut off his balls  and hang them from her car mirror like a pair of fuzzy man-dice.

Kris Schoels of YoungMarriedChic.com opined that “problems can arise” when families do not follow “traditional gender roles.”

“Is there a biological need for the man to take care of the women here?” Morris asked Miss New York USA 2013 Joanne Nosuchinsky, who recommended finding a man who was not insecure about his wife earning more.

Too late, you've been gelded! Now go make mama a nice Salad Niçoise - dressing on the side - and a mangotini, then get you cute little butt back in there and turn on Ellen, mama  needs a little lesbian therapy.

Tucker Carlson, whose body contains over 40% of our nation's testosterone reserves, got his cha-chas in a swivet at the idea that a woman might pay for dinner [didn't Tucker's dad marry Swanson Frozen Foods heiress Patsy Swanson? Shut up and eat your Hungry Man dinner, jerkface]:

Carlson argued that men did not necessarily need to hunt and fish to be masculine.

“Men, who on the second date, let their date pay for dinner, I’m sorry that’s disgusting,” he insisted. “And I don’t care. The new norms are — he shouldn’t allow it. Period.”

Co-host Sandra Smith pointed out that men could show respect for women “and not assume that he’s the macho man” who needs to pay for dinner.

“He should be the macho man,” Carlson shot back. “He ought to have respect for himself. Are you kidding? Let a girl pay? What are you joking?”

Katie Pavlich, who is being groomed by Fox to cater to the part of their audience who thinks Elizabeth Hasselbeck is 'too erudite,' explained that the first rule of feminism is not "Ex-boyfriends are just off-limits to friends," it's all about taking the 'man out of manliness':

“Because the feminist movement for decades has told men not to embraces their manliness, that is part of the patriarchy of our society. And that being a man is a bad thing. And that you should downgrade your manliness. And saying ‘man up’ is not acceptable because manning up is not based on gender.”

“They have all these things where they take the man part out of being a man,” she added. “And then we wonder why men don’t act like men anymore.”

So, in War on Women v2.1, they're going after the women who aren't all gimmee-gimmee,  but have become self-sufficient makers and not takers which  --  Republicans  would have you believe --  is their base and not angry old people, racists, gun nuts, and the men's rights crowd.

But then you know what they say about conservatives: they can never make up their minds. Amirite?

They're adorable that way...

[Cute girl and money on Shutterstock]