Fired HGTV hosts the Benham twins: 'We love homosexuals,' but not their 'agenda' 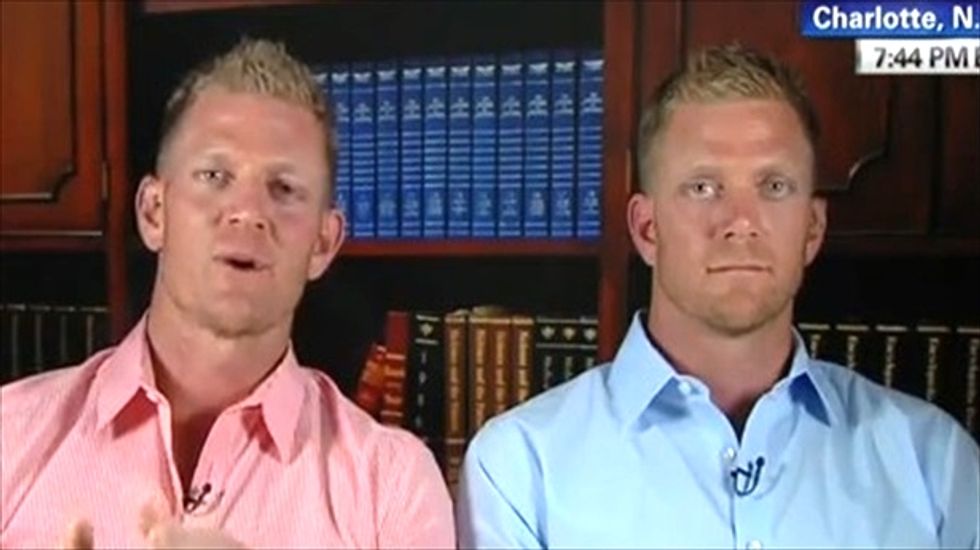 David and Jason Benham, the twin television hosts who lost their program on the HGTV network, suggested to CNN on Thursday that their statements against reproductive health and the LGBTQ communities were taken out of context.

"I believe that any sex outside of marriage, no matter what kind of sex it is, is just not healthy for human flourishing before God," David Benham (pictured above, left) told host Erin Burnett. "I think it's just a very important thing that we just set the record straight, and I'm grateful for the opportunity to say directly to the camera that we love homosexuals and we love Muslims and we have nothing against the people. There's a difference between the people and an agenda."

The Benhams, who made their name "flipping" real estate properties, were scheduled to host an HGTV show following them around as they showed families how to do the same before The Raw Story and other media outlets contacted the network seeking comment regarding anti-abortion and anti-LGBT remarks David Benham made in 2012, some of which Burnett played on the air.

"If 87 percent of Americans are Christians and yet we have abortion on demand, we have no-fault divorce, we have pornography and perversion," Benham told conservative radio host Janet Mefferd at the time. "We have a homosexuality and agenda that is attacking the nation."

After Burnett asked if he stood by those remarks, Benham repeated his point to Mefferd that he was criticizing church oficials for "sitting silent" on the issue. He did not explain how same-sex couples getting married attacked his religion.

"One of the things that's important is that never have I ever spoken against homosexuals as individuals and gone against them," Benham said. "I speak about an agenda, and that's really what the point of this is -- that there is an agenda that is seeking to silence the voices of men and women of faith, and that's what all this is about."

A conservative Christian group, Faith Driven Consumer, has echoed Benham's accusations, launching a campaign to get the network to reverse its decision and reinstate their program.

Watch the interview, as aired on CNN on Thursday, below.