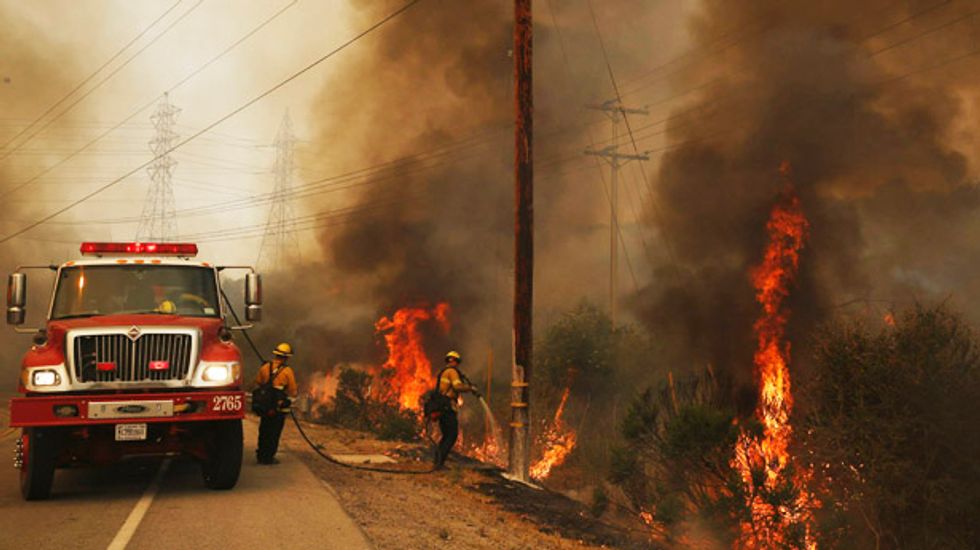 Firefighters are seen fighting the Las Pulgas Fire at Camp Pendleton, California in this May 16, 2014 handout photo from the USMC. The Las Pulgas Fire is one of four fires at Camp Pendleton Marine Base north of San Diego which prompted evacuations of several outposts within the installation. REUTERS/Cpl. Sarah Wolff/USMC/Handout via Reuters (UNITED STATES - Tags: DISASTER ENVIRONMENT MILITARY) ATTENTION EDITORS - THIS PICTURE WAS PROVIDED BY A THIRD PARTY. REUTERS IS UNABLE TO INDEPENDENTLY VERIFY THE AUTHENTICITY, CONTENT, LOCATION OR DATE OF THIS IMAGE. FOR EDITORIAL USE ONLY. NOT FOR SALE FOR MARKETING OR ADVERTISING CAMPAIGNS. THIS PICTURE IS DISTRIBUTED EXACTLY AS RECEIVED BY REUTERS, AS A SERVICE TO CLIENTS

LOS ANGELES (Reuters) - California firefighters have largely subdued a swarm of blazes that gutted dozens of homes and forced evacuations of thousands of dwellings in and around San Diego, but Governor Jerry Brown said on Sunday the state was still bracing for its toughest fire season yet.

Diminished winds and cooling temperatures over the weekend helped crews completely or mostly encircle nearly a dozen fires by Sunday that have charred at least 26,000 acres of drought-parched brush in San Diego County since the middle of last week.

No serious injuries have been reported, though officials were trying to determine whether a burned human corpse found on Thursday at a homeless encampment in the coastal town of Carlsbad had died in the fire.

Stoked by an unseasonable mix of triple-digit temperatures, extremely low humidity and hot, dry Santa Ana winds blowing in from the desert, the blazes highlighted what was already shaping up as one of the earliest and fiercest starts to California's wildfire season in decades.

Even before last week's conflagrations in San Diego County, more than 1,350 wildfires had erupted statewide since January, double the number tallied during the same period in 2013, said Mike Mohler, a spokesman for the California Department of Forestry and Fire Protection.

Brown, appearing on ABC News, said a prolonged drought and the surge in wildfire activity were ominous signs of a changing climate that will compel California "to make very expensive investments and adjust."

"We're in a very serious fire season, more serious than we've seen before," Brown said. "Humanity is on a collision course with nature, and we're going to have to adapt to it in the best way we can."

By Sunday, firefighters had managed to carve containment lines around 85 percent of the so-called Cocos fire, which last week destroyed 39 houses in the town of San Marcos, north of San Diego, according to Cal Fire spokesman Kendal Bortisser.

A smaller fire that raged in Carlsbad was 100 percent contained on Sunday after causing property losses estimated at up to $15 million, including eight houses and an 18-unit apartment building destroyed.

Firefighters also were gaining an upper hand against three large blazes that burned across more than 20,000 acres of the sprawling Camp Pendleton Marine Base north of San Diego.

As many as 125,000 people living in and around San Diego, California's second-largest city, had been forced to flee their homes last week, but most evacuations had been lifted by Sunday.

The origins of the blazes remained unknown. While arson investigators were looking for possible links between them, none of the fires has been ruled suspicious, fire officials said.