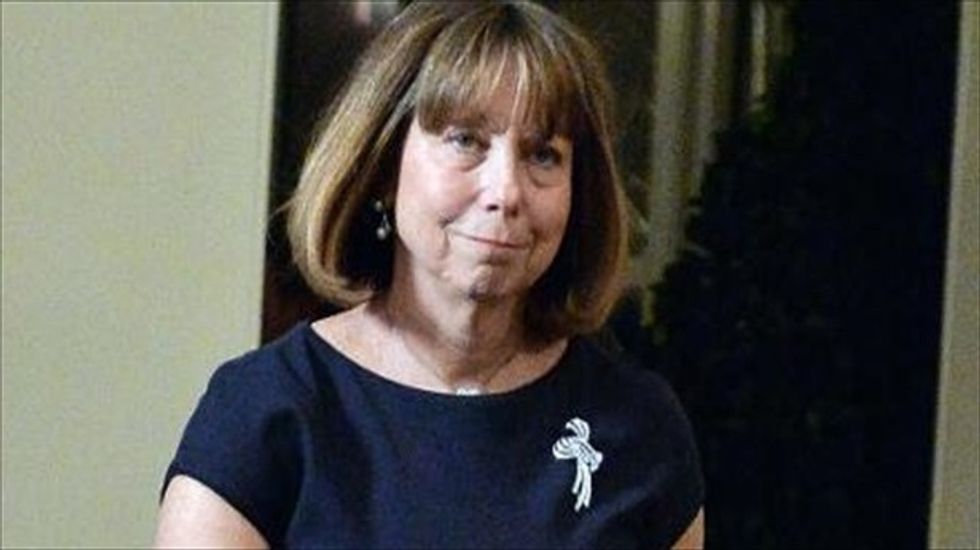 The firing of top New York Times editor Jill Abramson has sparked debate on the role of women in media and about equal pay in the industry.

The storied US media group has said Abramson, abruptly dismissed earlier this week, was not paid less than her male counterparts, although some reports dispute this.

Still, the incident prompted renewed concerns about gender discrimination and leadership roles for women in the industry.

"The fury of women journalists who identify with Abramson stems from what we know: that excellent performances are not enough," said Emily Bell, director of the Tow Center for Digital Journalism at Columbia University, in a column in The Guardian.

"Women must be completely different from the men they replace (or who replace them), apparently -- they must adapt to the power they are briefly allowed to hold without transgressing the gender roles they aren't allowed to escape."

Some said the unceremonious axing of Abramson set back the cause for women, just three years after she ascended to arguably the most prestigious job in American journalism.

"Abramson's presence allowed a new generation of women at the Times to begin to see a possible future in leadership at the paper, but it also helped disrupt the paper's masculine approach to news coverage," writes Amanda Hess for Slate.com

A report released last month by the Women's Media Center, a group founded in 2005 by Jane Fonda and activist Gloria Steinem, suggests that progress has stalled for women in the news media.

The report said that the percentage of women newsroom staff last year was 36 percent "a figure largely unchanged since 1999."

The report said snapshot in 2013 of articles appearing on The New York Times' front page showed that men were quoted 3.4 times more often than women, though the rate was not as high when women wrote the story.

A separate Indiana University study found the median income for women employed at newspapers in 2012 was about $5,000 less than for men. And Pew research Center analysts painted a similar picture.

"Our data analysis finds that overall there has been little significant change in the share of women newsroom employees and news managers in recent years," said Monica Anderson of the Pew Research Center Journalism Project.

Anderson said in a blog post that "virtually the same proportion of women (35 percent) worked in supervisory positions in newspapers in 2012, a number that has also barely changed since 1998."

A report by New Yorker journalist Ken Auletta said Abramson's starting salary in 2011 as executive editor was $475,000, compared to $559,000 for her predecessor Bill Keller.

The report said her salary was raised to $503,000, and then to $525,000 after she protested, Auletta also said his figures showed Abramson was paid less as managing editor a male counterpart.

The figures appeared to be at odds with a statement released by Times publisher Arthur Sulzberger.

"It is simply not true that Jill's compensation was significantly less than her predecessors," Sulzberger said in a memo to staff Thursday.

The discrepancy could reflect factors other than salary -- bonuses, stock compensation and pension benefits, some pointed out.

The incident appeared to leave questions unanswered and shocked some in the industry.

"Abramson's firing was among the most harsh and humiliating I've ever seen play out in the media's recent history," wrote Rebecca Traister in the New Republic.

"Whatever the (possibly caveman) calculations performed by Arthur Sulzberger Jr., the publisher and chairman of the Times, his dismissal of Abramson -- and naming of Dean Baquet, the paper's managing editor, to the top spot -- should have been marked by something approximating respect. It was not."