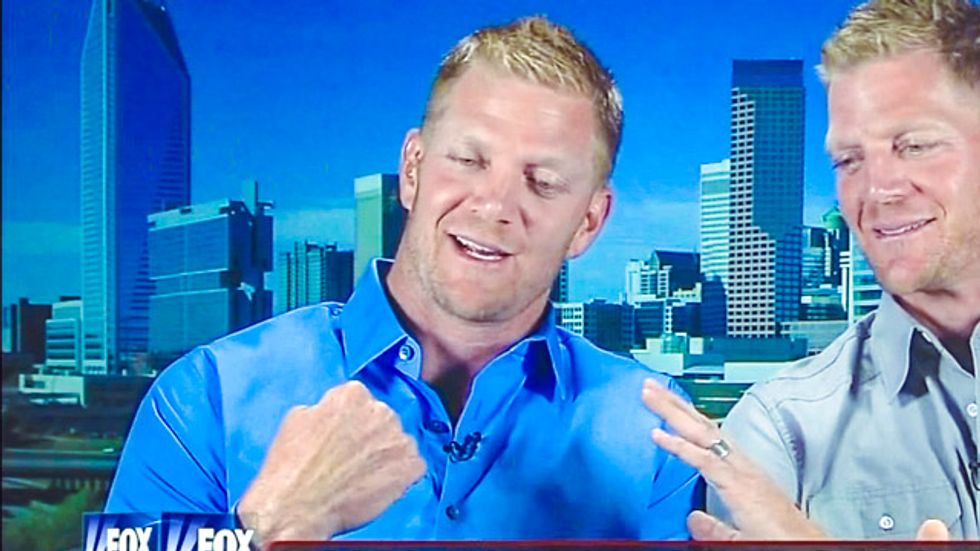 Two brothers who were fired by HGTV said on Sunday that they did not mind losing their reality TV show over their anti-gay views because their message was part of the "perfect truth" of Jesus Christ.

In an interview with Fox News host Shannon Bream, David Benham said that he could understand why ant-gay statements -- like comparing same-sex marriage to Nazism -- would offend LGBT people if they were taken out of context.

"The statements that I made were actually in context of a prayer service to the church," he explained. "And so, it's been very pleasing to my brother and I, for us to be able to go on record and set it straight, and let those that have been hurt, let those that have felt some type of hatred for my brother and I in terms of what we've said in the past, and say, 'We do not hate you all. As a matter of fact, we love you.'"

However, David Benham pointed out that he and his brother did "absolutely hate" the gay "agenda."

Bream remarked that many "Christians" had told her that they would never publicly oppose LGBT rights for fear of being ostracized.

"What David and I say is that in the embodiment of Jesus Christ, you have perfect love and perfect truth," Jason Benham opined. "See, truth is a person. Love is a person. And that's why we talk so much about Jesus. Because when you bring Jesus into the equation, you've brought love and you've brought truth. And there's no fear in that."

"So, I can go and I can proclaim Jesus, and that's truth and it's love," he continued. "We didn't fear losing a television show."

Jason Benham said that his experience had made other Christians "a little more bold" to "say what they believe."

"If you do love people, you can voice your beliefs," David Benham argued. "And the scripture says -- and we're Bible guys, sorry -- but the scripture says, 'Greater love hath no man than this, that he would lay down his life for his friend.'"

"You have to identify that your friend is being bullied," he insisted. "So that's what Jason and I are doing."

Jason Benham noted that his brother used to suck his thumb, and knew what being bullied felt like.

"I remember him getting bullied and sucking his thumb, and I had to come in there and clean house," Jason Benham said, holding up his fist.