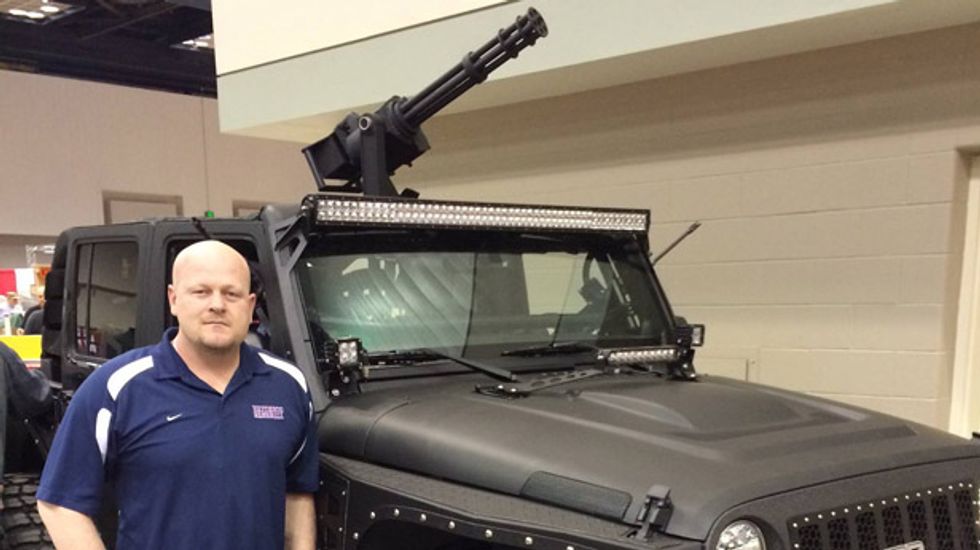 Stung by criticism for his exceedingly brief encounter with empathy for the families who lost kids in the Santa Barbara Second Amendment Slaughterfest, Joe the Unlicensed Plumber has both bunkered and doubled down with his assertion that you can have his guns when you pry them from his clammy toilet-plunging hands.

You see, when you tell Joe the Plumber that it was kind of a dick move to tell grieving parents that your guns are more important than the lives of their previously alive kids -- before the bodies are even in the ground -- well, that means that you hate our fighting men and women and our Founding Fathers and the US Constitution (2nd Amendment only) and probably America too, you filthy Marxist hater.

Because, when you attack Joe The Plumber, you're "mocking" the memory of everyone who has ever fought and died in our wars. Even the ones that we lost or tied.

He says so right in the headline:

Military Members Died Defending Our Rights, Will You Allow Their Sacrifice To Be Mocked

Joe, it should be noted, spent some time in the U.S. Air Force, stationed in the battle zones of Alaska and North Dakota where he was taught the Art of War which included, but was not limited to: wastewater transportation and backflow prevention. As is the custom, we thank him for his service and for keeping the hot water hot and the urinal cakes freshened.

And he did not serve his country with pride by unblocking the cleanout so that  you could start grabbing guns willy-nilly just because they are plentiful, cheap, and way too easily accessible.

Joe wants you to know that he wrote his open letter on Memorial Day Eve as a homage to those fighting men and women and not because he was suffering from fear-of-gun-deprivation-panic:

I wrote my “open letter” on the eve of Memorial day – a day we honor the fallen heroes that (sic) defend and protect our rights.

These men and women that (sic) served and paid the ultimate price for our way of life were someone’s dad, mom, brother, sister, or daughter. They made that sacrifice, which guarantees our freedoms because they believe in America. So I’m asking the question:

Why are the lives of these brave Americans less important than the victims of Elliot Rodger?

I think they may have also fought for the freedom of Americans to not be shot by stranger with a gun, here as well as abroad ... but that's just me.

Left-leaning politicians and their lapdogs in the mainstream media want to use this “crisis” to further chip away our rights. They want to use these deaths to gain more power and more control. They only care about the victims so long as they serve a purpose:

The killings are useful, the grieving an opportunity, the survivors are props in a staged circus of phony outrage, but with real people now damaged by the very policies the Marxists hope to arrange more of.

Don’t believe me? Look how the country has taken care of our veterans:

Cue Joe, being topical. The VA!, which is the new #Benghazi!

Even when 90-year-old men in wheelchairs wish to visit the WWII Memorial in Washington D.C. – a monument they built by trudging across Europe in their bare feet to kill Nazis, cramming into submarines in the South Pacific to hold off the invading Japanese, and staring down Rommel’s tanks in Africa – they’re confronted with steel barricades, compliments of the Administration.

Cue Joe being dated and blaming the Administration for the government shut-down...making him part of the minority who believes it was Obama and not Republicans being led astray by Ted Cruz.

-Whistles don’t protect women from rape – a Glock does!

-When armed men come into your house to steal, a baseball bat doesn’t cut it. Unless you have an automatic-baseball bat. I want one of those – email me.

-When a nut-job decides to go on a killing spree and the cops are 5 to 15 minutes away, you are screwed unless you are carrying a Colt.

-And – this is the most important one:

Guns are mostly for hunting down politicians who would actively seek to take your freedoms and liberty away from you. Google “Hitler, Mao, Kim Jung Il, Castro, Stalin” just for starters.

Outside of the threat to start murdering politicians (tree of liberty, refreshed, etc etc), it looks like someone has been playing Gun Nut Bingo 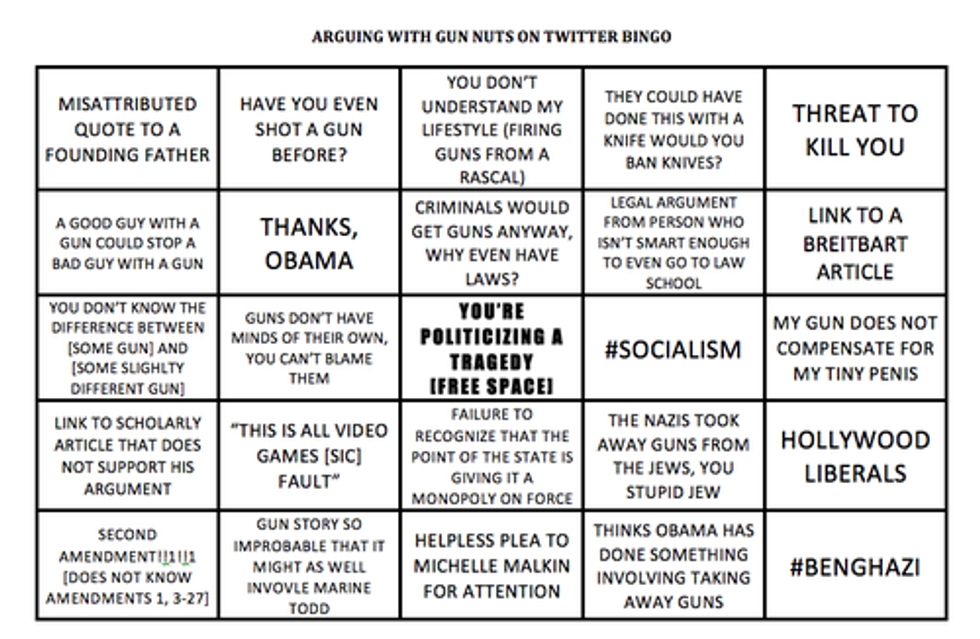