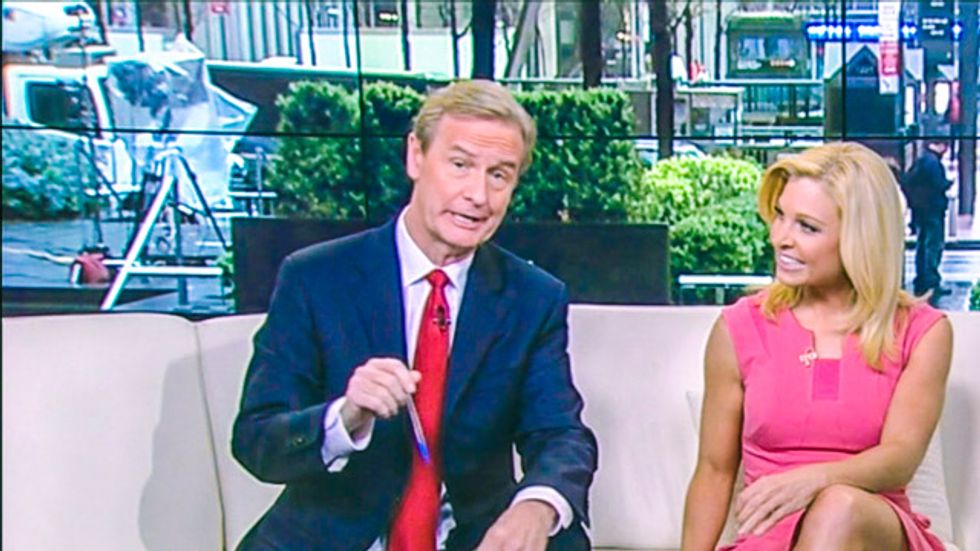 The hosts of the Fox News morning show Fox & Friends called Scientific American editor Michael Moyer a "coward" on Thursday after he revealed on Twitter that the network had barred him from talking about climate change a day earlier.

In a tweet after his visit with Fox News on Wednesday morning, Moyer explained that he wanted to talk about climate change during the "future trends" segment but the producers told him to "pick something else."

Moyer's tweet obviously hit a nerve because Fox & Friends lashed out at him in a second segment on Thursday that was about 20 percent longer than the original interview.

But the Fox News hosts seemed to miss the message about climate change because they spent most of the time talking about co-host Brian Kilmeade's theory that there might be football on other planets.

"I thought -- I wondered if they had football," Kilmeade explained. "I thought it was a decent idea."

"It was a joke!" co-host Steve Doocy exclaimed.

"I thought you were serious on that one," co-host Anna Kooiman admitted.

"Clearly he has a problem with Fox," Doocy opined. "So why did he come on? Clearly, it was just to promote himself, and maybe his magazine as well. But, you know, hashtag classy. We put him on, we have a nice conversation, and then he stabs us in the back."

Finally in the fourth minute of the segment, Kooiman acknowledged that Moyer had a "bone to pick with Fox" because he was not allowed to discuss climate change.

"Our producers decide what we air," she insisted.

"We talk about climate change all the time," Doocy added.

"And the things he talked about were actually quite interesting, right?" Kooiman remarked. "Robots driving your cars in the future... things that actually matter."

"And we know that someday the Earth will be so hot that only robots will survive," Kilmeade quipped.

Fox & Friends Elisabeth Hasselbeck recently declared that climate change was just a "product" that was being "sold" to the American people.