Hamas TV for kids: Let's shoot all the Jews! 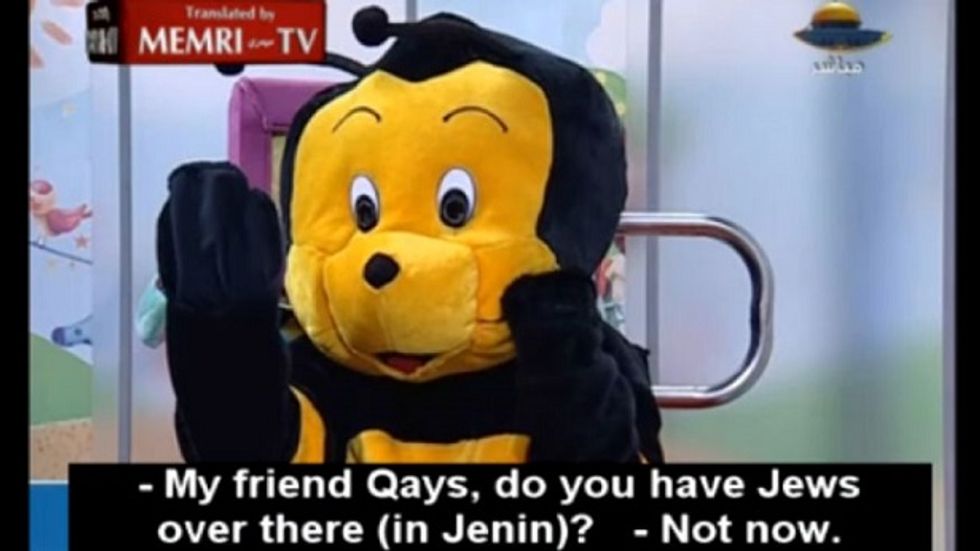 A recent episode of the Hamas-affiliated television program Pioneers of Tomorrow featured a disturbing combination of talking bee mascot and a discussion of shooting Jews -- all of them.

The Palestinian children's program, which runs on Hamas' state-run Al Aqsa TV station, has a history of glorifying suicide bombers and demonizing Jews, and this is just the most recent example.

In the clip, a young girl says that she wants to become a policewoman some day, “so that I can shoot Jews.”

The host of the program -- a very young woman, asks, “All of them?” The young girl responds, “Yes.”

Earlier in the clip, the bee character advises a caller, a young boy, to punch Jews when he sees them: "Make their face red like a tomato."

Says Coyne, "I need hardly say, for I’ve said it before, that Israel shoulders its share of blame for the failure to achieve peace in the Middle East. But what you can’t say is that Israel use the organs of government to teach children religiously-based hatred and a suicide death cult. This indoctrination just propagates the hatred that makes peace impossible. Remember, too, that Hamas’s charter mandates the complete elimination of Israel."