Jindal: 'The war over religious liberty is a war over free speech' 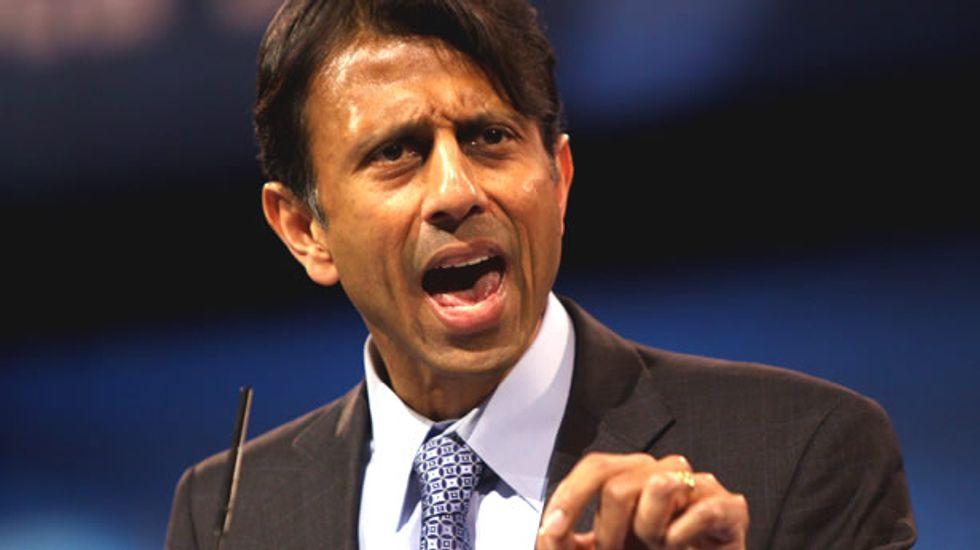 Speaking at Liberty University's 2014 Commencement yesterday, Louisiana Governor Bobby Jindal (R) attacked "elite" liberals who, he claimed, have launched "an assault on the freedom of expression in all areas of life."

"Today the American people, whether they know it or not, are mired in a silent war," Jindal began. "It is a war -- a silent war -- against religious liberty." He claimed that Obama Administration's argument against Hobby Lobby "strikes at the core of our understanding of the free exercise of religion."

"Under the Obama regime," he continued, "you have protection under the First Amendment as an individual, but the instant you start a business, you lose those protections. And that brings us to the second front in this silent war: the attack on our freedom of association as people of faith."

Jindal claimed that the Obama Administration would prevent religious groups from selecting "their own ministers or rabbis." "Thankfully," he said, the Supreme Court decided to shoot down the administration, "so for the time being, at least, the federal government doesn't get to decide who can preach the Gospel."

"Make no mistake -- the war over religious liberty is a war over free speech. Without the first, there is no such thing as the second."

He then discussed the Duck Dynasty controversy. "You may think that I was defending the Robertsons simply because I am the governor of their home state, the great state of Louisiana," he said. "You would be wrong about that. I defended them because they have every right to speak their minds."

The real issue is that "liberals" are doing everything in their power to "silence debate." The new left in America is completely intolerant of people of faith,” Jindal said. “The left no longer wants to debate. They simply want to silence us."

"As you well know," he continued, "the same thing happened again this week, with another demonstration of intolerance from the entertainment industry. HGTV was working on a new show featuring the Benham brothers -- twin brothers who graduated from right here at Liberty University in 1998."

"I know they've already been recognized," Jindal said, "but I'd like to ask them to stand so we can give them another round of applause for their courage and grace. HGTV cancelled the show this week, allegedly, because they learned that one of the brothers protested at the Democratic Party convention, and the other had protested at an abortion clinic."

"If these guys had protested at the Republican Party convention or here at Liberty University," he concluded, "instead of cancelling their show HGTV probably would've given them a raise."