John Boehner gets called out: What does 'Obamacare have to do with immigration?' 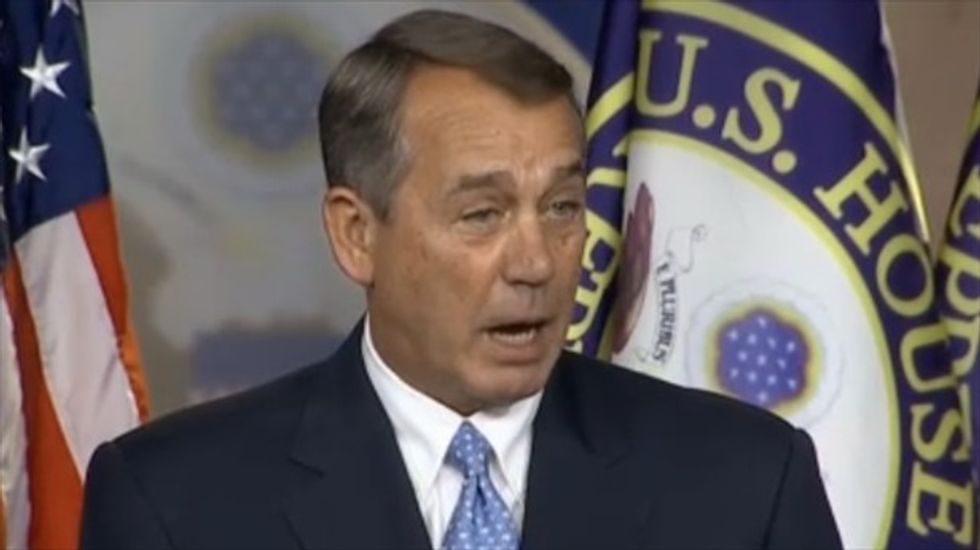 House Speaker John Boehner (R-OH) was challenged on immigration reform during a press conference on Thursday when he brushed off Fusion anchor Jorge Ramos' accusation that he was blocking a bipartisan measure passed in the Senate a year ago.

"Since when does Obamacare have [anything] to do with immigration reform?" Ramos asked pointedly, after Boehner argued that President Barack Obama's changes to the Affordable Care Act had caused his party not to trust him to follow through on immigration reform.

"Me? Blocking?" Boehner scoffed. "The issue of immigration reform is an issue I've talked about for 18 months."

"The Senate passed it a year ago, and you haven't moved on that," Ramos insisted.

"I just gave you an answer," Boehner said. "There's nobody more interested in fixing this problem than I am."

"You can do it, and you really haven't done it," Ramos said.

"I appreciate your opinion, thank you," Boehner responded, ending the discussion.

Boehner's remarks on Thursday were consistent with past statements accusing Obama of stalling the process by refusing to work with the GOP on other issues.

Last month, Boehner also reassured his House colleagues that he would not force the issue, after getting caught mocking their resistance in public.

"We waited 329 days. We're willing to wait another six weeks," Reid said. "But at the end of six weeks, if something hasn't been done, then there's going to have to be a move made."

Reuters reported last month that Obama was considering acting on his own to implement immigration reform, though they would fall short of measures immigration advocates have demanded.

However, Reid seemed to demur when Ramos asked if he would call upon Obama to stop the country's deportation policy.

"He has deported more than two million people," Ramos said. "He has destroyed thousands of families. Why not put the pressure now on the right?"

"We understand what this has done to families," Reid responded. "I first started talking about this situation a long time ago. The words were 'family unification,' and the way to do that once and for all is to pass comprehensive immigration reform."

Watch Ramos' interviews with Boehner and Reid, as aired on Thursday, below.