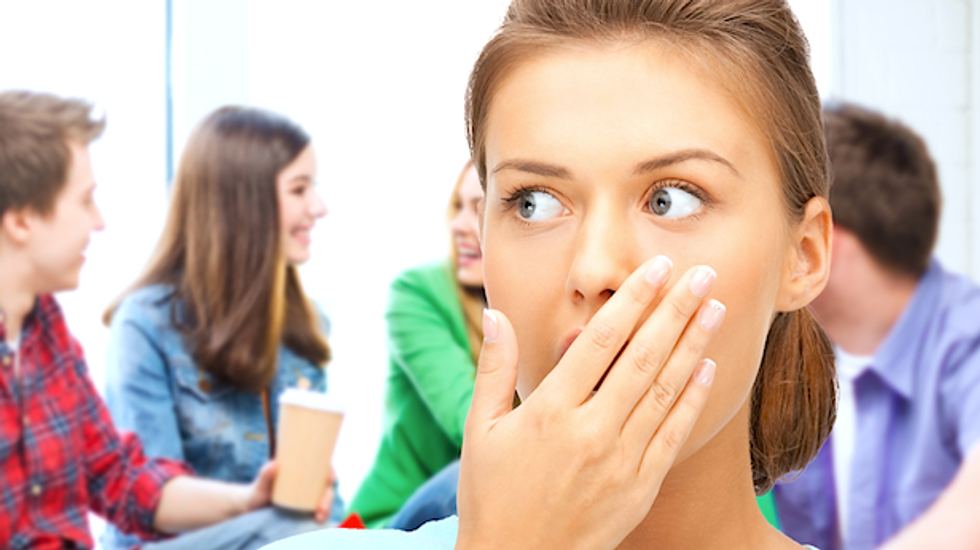 Two students in Kansas were suspended after they said a teacher accidentally showed a pornographic image in class.

The teacher, whose name was not released, turned on an overhead projector connected to his laptop computer during a first-period biology class at JC Harmon High School, and students briefly saw the explicit image, reported KCTV-TV.

Laura Lester said her daughter used her cell phone to take a photo of the image, which showed a man having sex with a woman from behind, before the teacher shut off the projector.

"When she came home from school she was crying her eyes out, unable to speak about what had happened," Lester said. "It was very upsetting that this is happening when our kids are in school, when they are supposed to be learning."

Lester said her freshman daughter sent the image to her boyfriend, asking what she should do, and he sent the picture to a friend.

That friend apparently posted the image to his private Facebook page, and Lester’s daughter and her boyfriend were pulled out of class and then suspended for two days.

"For inappropriate use of electronics,” Lester said. “I have no idea (what that's supposed to mean). I tried to run it through my mind and understand. She was on her own cell phone.”

Karen Winkel, whose son was suspended, thinks the Kansas City school punished the teens to cover up the teacher’s misdeeds.

Both parents said they tried to appeal the decision to school administrators, saying their children were honor students who did not want the suspensions on their permanent records.

"That's the most upsetting, that she's looking into colleges and looking at a bright future and this is going to follow her, what this teacher did," Lester said.

They consulted an attorney, who told them that Kansas law offers no real recourse for reversing the suspensions.

They agreed to waive their children’s privacy rights, but school officials still declined to discuss the incident.

Officials did, however, say they would be willing to sit down with the parents again to discuss the case.

The teacher, who has worked for Kansas City Public Schools since 2002, was placed on paid administrative leave while the incident is investigated.