Kentucky Sec. of State's only appeal is that she's a woman, says Tea Party longshot 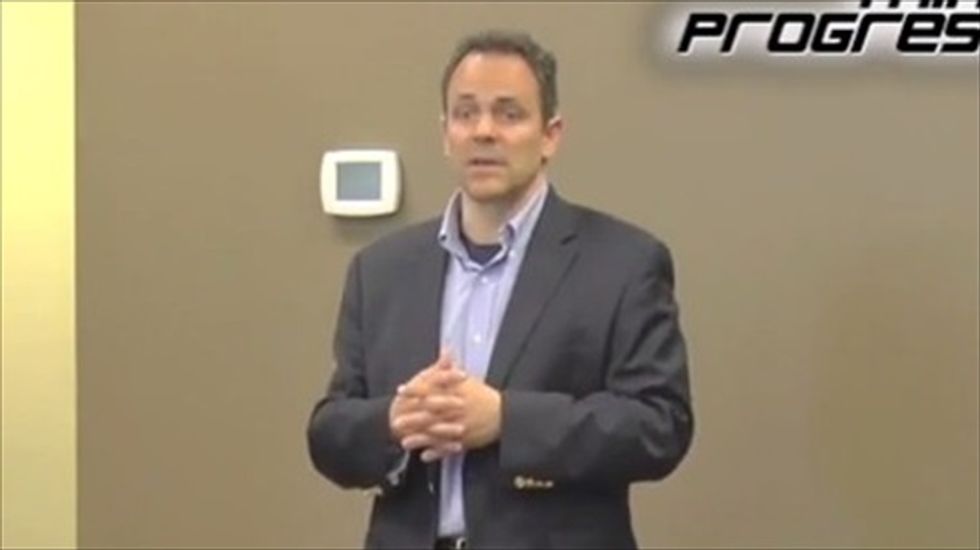 A Tea Party challenger to Senate Minority Leader Mitch McConnell (R-KY) denigrated his prospective Democratic opponent, Alison Lunderman Grimes, by saying she lacked "life experience" and was basing her entire campaign around being a woman, in video posted by Think Progress on Tuesday.

"She runs on four things. She runs on some variation of: she's young, she's new, is a woman, and she's not Mitch McConnell," Bevin said in the video, filmed at a campaign stop in Madisonville. "That's essentially what she's got, in some form or fashion. And all those are true enough, and all of those, while they're not substantive, they're good enough to beat Mitch McConnell."

Bevin did not mention that Lunderman Grimes has served as Kentucky's Secretary of State since 2012. With two weeks to go until the May 20 primary election pitting him against McConnell, both Real Clear Politics and the Huffington Post show the Tea Party candidate trailing McConnell by at least 20 percentage points.

However, Bevin has picked up the support of conservative radio host Glenn Beck, who said last month that Bevin "was called of God" to defeat McConnell. Bevin also drew attention to himself by speaking at a rally supporting the legalization of cockfighting, which his campaign said he thought was really about state's rights.

"The reality is I negate her only competitive advantages," Bevin said in the video, after calling himself "young and new" like Lunderman Grimes. "She's then forced to run against me by talking about issues, by talking about vision, by talking about life experience. And she really has none of the above on any of those fronts. She's a nice enough person, I've met her on several occasions on the campaign trail, seems nice enough, but completely devoid of what it takes for us."

Watch Bevin's remarks, as posted by Think Progress, below.