Like word salad through a woodchipper, here is something Sarah Palin really actually wrote 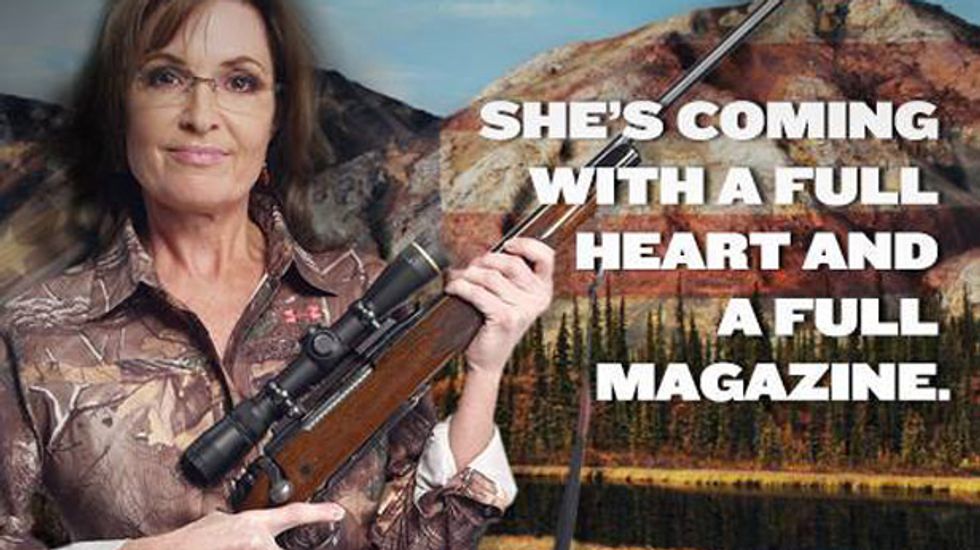 Normally I don't like to write about Sarah Palin in back to back posts but, like Operation American Spring that went from farce to absurdity to hilarity , sometimes you have to go where the derp takes you.

I have said repeatedly that it is fairly apparent that everything that supposedly leaks from the pen of Sarah Palin is no doubt written by someone else -- possibly while Sarah dictates as she rinses out her extensive collection of Bumpits.  We know that Nancy French has applied her interpretive skills to the Palin family oeuvre; creating a narrative structure out of notes scribbled on Arby's napkins with lipstick, as well cassettes containing guttural hoots, belches,  and click consonants.

We also know the early Palin-adopter, Rebecca Mansour, has shared in the seemingly endless bounty of Palin grift dollars, fleeced from the yokels, in return for services rendered.

But today's Facebook .... 'eruption' has got methed-up 4AM trailerpark  hoohah written all over it, by which I mean: Sarah Palin sat her own bad-self down at the typewriter attached to the TV set where she does the Google on her name and refreshes every forty seconds or so to see if she is still 'a thing,'  and she pounded out some gen-u-wine Northen Frontier gibberish.

It seems that it has come to Sarah's attention that Karl Rove got his man-boob caught in a wringer for saying that Hillary Clinton has brain damage, and Karl should know because he worked with George W. Bush for a hell of a long time. It was a pretty stupid thing for Rove to say and he walked it back a smidge, kinda sorta not.

Palin agrees, we think -- you'll see in a minute-- that this is terrible, but you want to know who the real victim is here?

Her reaction can best be described with a quote from Remembrance of Things Past, where Proust wrote: "Someone jes done shit theyselves a kitten."

Go ahead, look it up, it's in there unless you have a crappy translation.

Hey! Hillary’s brain is off-limits! Leave her health records alone! Democrats are right – scouring records of a female candidate is just politics of personal destruction, and for the media to engage in it would be unfair, unethical, and absolutely UNPRECEDENTED. You can’t probe a woman like that because, well, it’s a war on women!

Bunch of sexist, big meanies engaging in something heretofore unheard of, for shame.

America, you deserve fair and consistent coverage of relevant issues before deciding a Presidential/Vice Presidential ticket, so have faith the agenda-less media will refuse to push whispers and wildly inaccurate information about a partisan politician’s body part. Goodness, no one credible would print lies, continually harass a candidate’s doctor, disrupt local hospital staff, or even offer to pay locals to give “quotes” about her health records to be included in a “research book” by a public university professor (your tax dollars at work?) which the candidate’s attorney will need to respond to.

Thank goodness liberals are consistent in refusing to apply double standards, thanks to their disdain for hypocrisy – so they’ll come through once again! Rest assured these self-designated protectors of what they obviously believe is the “weaker sex” needing protection in the political arena will elevate political discourse. Apparently, Democrats demand their next chosen one’s brain must be absent. Opposition – go there exploring a liberal’s brain and you find nothing; or, find something and you’re just trying to distract voters from the REAL issues.

See, the country’s just swell under the Obama regime (which includes any cabinet member who’d lie and prove ineptitude by shining the boot that’s now on America’s neck). With enormous issues to debate before choosing a Presidential/Vice Presidential ticket, have confidence no mean-spirited salaciousness will be pushed by “real journalists.”

Nope. This just doesn’t happen at this respectable level of American politics.

Just ask me. And Trig.

I am a personal fan of "...who’d lie and prove ineptitude by shining the boot that’s now on America’s neck," because it has a certain je ne say whut? that is sooooo Sarah.