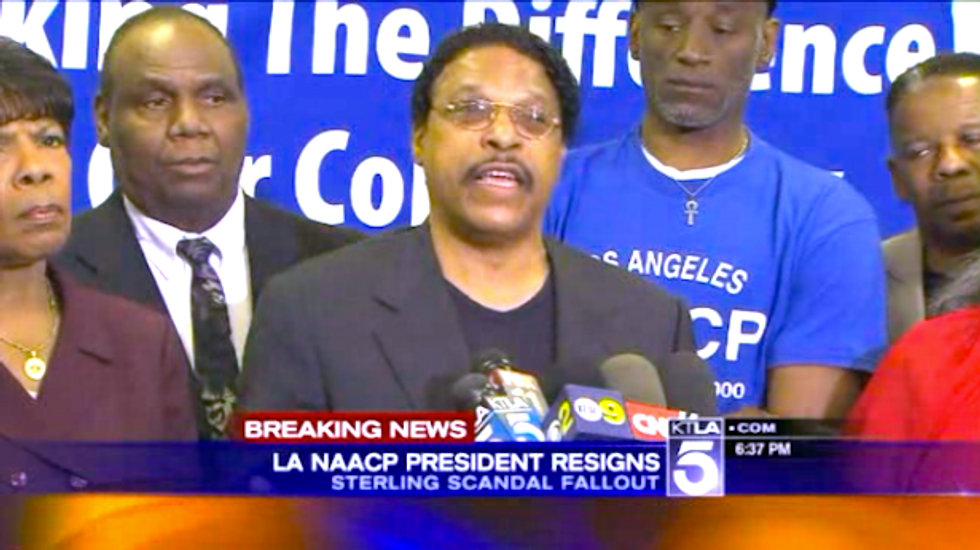 The president of the Los Angeles chapter of the NAACP resigned Thursday in ongoing fallout over racist comments made by the owner of the Clippers basketball team, who had been slated to be honored by the organization with a lifetime achievement award.

Citing the scandal over team owner Donald Sterling's anti-African-American rant on a widely circulated audio recording, Leon Jenkins said in a statement posted on the civil rights organization's website that he had caused the NAACP "negative exposure."

The scandal over Sterling's remarks, made public over the weekend, sparked outrage from fans and players, and numerous commercial sponsors pulled their support from the team.

On Tuesday, Sterling was banned from any further ties with his team or professional basketball, and was stripped of his seat on the governing board of the National Basketball Association, days after two websites released audio recordings in which a voice that is said to be Sterling's is heard criticizing a female friend for "associating with black people."

The NAACP said on Sunday that it would not honor Sterling at its annual dinner in the wake of his comments. But controversy grew over Sterling's relationship to the Los Angeles chapter, which had honored him before, and to which he had donated money.

Sterling has faced allegations of discriminatory conduct in the past. In 2009, he paid $2.7 million to settle a case brought by the U.S. Justice Department, which accused him of housing discrimination against blacks and Hispanics.

On Thursday, the NBA launched its bid to oust Sterling as owner of the Los Angeles Clippers for the comments, as a panel of 10 fellow team owners or their representatives unanimously agreed to proceed "as expeditiously as possible," the league said.

The decision, reached during a telephone conference call of the NBA Board of Governors' advisory-finance committee, seemed to indicate a strong base of support among Sterling's fellow owners for his removal, as urged by league Commissioner Adam Silver.

Silver said Tuesday that Sterling has acknowledged to the NBA that the recording was authentic but did not apologize. Silver also on Tuesday declared Sterling banned from the NBA for life, fined him $2.5 million - the league maximum - and called on the 29 other club owners who make up the governing board to exercise their authority to force Sterling to sell the Clippers.

Lorraine C. Miller, the interim national president of the nation's oldest civil rights organization, said in the same statement that she had accepted Jenkins's resignation.

The national office of the NAACP is developing guidelines for its branches to help them in their award selection process.