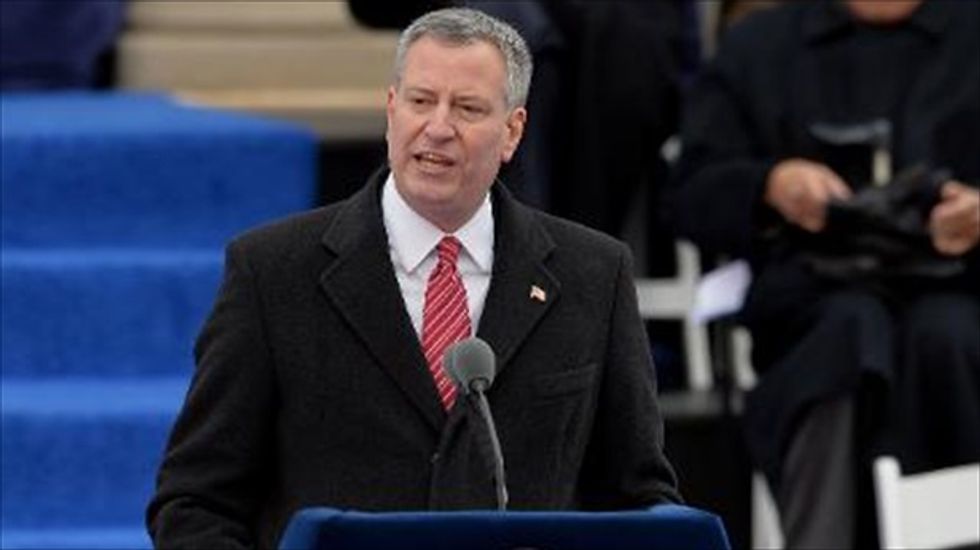 On the corner of 59th and 5th, Marcello, a 12-year-old, chocolate-brown draught horse, has his nose in a bucket of feed. Most days he and his Sligo-born owner, Karl Bruen, can be found taking tourists in an open carriage around Central Park.

But not for much longer. Marcello, who has spent most of his working life drawing a plough on an Amish farm near Lancaster, Pennsylvania, and at least 80 others like him could be put out to pasture or sent to the knackers' yard if Bill de Blasio, New York's liberal-minded mayor, manages to deliver a campaign pledge to make the city horse-free.

Backed by animal rights campaigners, De Blasio insists that it is time to pursue "more humane alternatives to the horse-drawn carriages". But six months into his term, his stand against carriage horses threatens to become a focal point for the opponents of his administration and his liberal-progressive legislative agenda.

The city's major newspapers have come out against the proposed ban and the powerful Teamsters union has mobilised in support of the carriage drivers, stable owners and stable hands.

The FBI is reported to be investigating payments from a De Blasio fundraiser to NYClass, an animal rights group leading the campaign to ban horses, which were then channelled towards undermining De Blasio's horse-supporting mayoral opponent, Christine Quinn. Carriage drivers believe that the payments can be traced to property developers who want to redevelop their stables on the west side of Manhattan as skyscrapers.

In a recent poll, 24% of voters said they would be more likely to vote against De Blasio if he runs for re-election if the ban were to go through. No one has done more to draw attention to the issue than Liam Neeson. The Oscar-winning actor is a passionate supporter of the carriages business. "It has been my experience, always, that horses, much like humans, are at their happiest and healthiest when working," Neeson wrote in the New York Times. He challenged De Blasio to "man up" and visit the stables to see for himself. "Mr Neeson feels very strongly about the issue," said Bruen. "We often see him out in the park. He stops to talk to the horses."

Neeson released a short film last week in support of Save NYC Horse Carriages that draws attention to the historical role horses have played in the city. The loss of the horses, Neeson warns, demarcates "a dividing line between who we were and who we want to be".

However, he is opposed by activists who claim that the horses live in abusive conditions and who sometimes picket Neeson's home near the park. The campaigners say the horses' working conditions are like prison. "They are shackled into their carriages, pulling through streets of a chaotic unnatural environment and go back to their cells," said Edita Birnkrant, the New York director of Friends of Animals. "They live a life of total confinement, day after day."

Bruen, 34, counters that Marcello likes to work and gets his exercise by pulling in the park. The Horse and Carriage Association of New York welcomes any inspection. "You have to be close to the business to see what's happening," Bruen said. "Guys like De Blasio form an opinion without ever visiting."

Supporters of Save NYC Horse Carriages say their welfare is overseen by five government agencies and 144 pages of regulations. Horses are not allowed to work in temperatures below 18F and above 90F. Their stalls must measure at least 64 sq ft. There are sprinklers in the stables, fans and water hoses for drinking. The horses have regular checkups, raincoats and a mandated vacation to a farm for five weeks a year.

Harry Werner, a former president of the American Association of Equine Practitioners, told the New York Times he had found no evidence of "inhumane conditions, neglect or cruelty". He found the horses were contented and suggested that critics were guilty of anthropomorphising. "They see a circumstance where they wouldn't want to work in it, and think a horse wouldn't work in it."

A bill to ban the trade has yet to be presented to the city council, but horse-supporters are already looking to state legislators to introduce legislation that would prevent a ban from taking effect.

The conflict is set to roll on. De Blasio recently pointed to the danger to horses in the city after a bus pulled out unexpectedly and overturned a carriage. The horse, Spartacus, was uninjured. Another owner was recently issued with a ticket when his horse was found to have a common hoof infection.

Despite signs that the horse and carriage is drawing energy and attention away from weightier aspects of the administration's reformist agenda, De Blasio is not signalling that he is prepared to compromise.

Bruen said the threat to ban his trade initially hurt business but it had now picked up. "If anything, the fear that the horses might be leaving has helped," he said. "But to be honest I'm getting tired of reading about it. It's not a job you'd do for the money. You make a living, and it's nice working in the park."