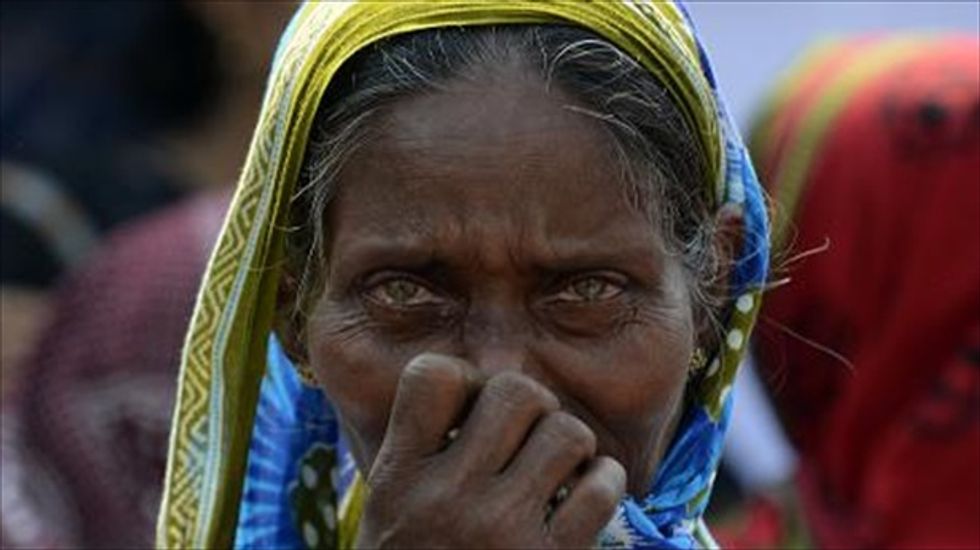 A Bangladeshi mourner and relative of a victim of the Rana Plaza building collapse reacts as she takes part in a protest marking the first anniversary of the disaster in Savar on April 24, 2014

Forced labour in the global private economy generates illegal profits of $150bn (£89bn) a year – three times more than previously thought – according to a report that lays bare the lucrative scale of the exploitation faced by millions of people trapped in modern-day slavery, coerced employment and trafficking.

The study, by the UN's International Labour Organisation (ILO), found that almost two-thirds of the total profits ($99bn) came from commercial sexual exploitation; the rest was derived from forced economic labour, such as domestic work, construction and mining.

According to ILO estimates, more than half of the 21 million people believed to be experiencing forced labour, trafficking and modern-day slavery are women and girls in commercial sexual exploitation and domestic work. Men, meanwhile, are most commonly exploited in agriculture, construction, manufacturing, utilities and mining – sectors that together account for $43bn of the annual illegal profits. The remaining $8bn comes from the savings private households make by either not paying or underpaying domestic workers held in forced labour.

Meanwhile, the report calculated that annual profits from forced labour per region were highest in Asia-Pacific ($51.8bn), followed by developed economies and the EU ($46.9bn); central and south-eastern Europe and the Commonwealth of Independent States ($18bn); Africa ($13.1bn); Latin America and the Caribbean ($12bn) and Middle East ($8.5bn).

People are usually pushed into forced labour because of poverty and sudden income shocks, the report suggests, while illiteracy, a lack of education, gender and migration are contributory factors.

The ILO director-general, Guy Ryder, said the study had taken understanding of forced labour and slavery to a new level, and called for leaders to redouble their efforts to eradicate "this fundamentally evil, but hugely profitable practice".

"If we want to make a significant change in the lives of the 21 million men, women and children in forced labour, we need to take concrete and immediate action," he said. "That means working with governments to strengthen law, policy and enforcement, with employers to strengthen their due diligence against forced labour, including in their supply chains, and with trade unions to represent and empower those at risk."

Beate Andrees, head of the ILO's special action programme to combat forced labour, urged the international community to do more to reduce the vulnerability of those people most at risk. "While progress is being made in reducing state-imposed forced labour, we must now focus on the socioeconomic factors that make people vulnerable to forced labour in the private sector," she said.

Andrees outlined preventive measures, including bolstering social security guarantees to protect poor households from abusive lending or indenture; investing in education and training to increase job opportunities for vulnerable workers; promoting the rights of migrants to stop irregular employment and the abuse of migrant workers; and supporting the organisation of workers, including in those sectors and industries vulnerable to forced labour.

Aidan McQuade, director of Anti-Slavery International, described the estimates as staggering, and said the report showed not only the persistence of slavery in the world but also the modern economy's dependence on it. "We have to realise that the problem of slavery is one that touches us all, as in a globalised economy we all buy products likely to be tainted by forced labour," he said.

"That is why the governments need to take concrete steps to address forced labour across the world," he added. "The UK government for example could become a world leader in the struggle against slavery if it introduced in the modern slavery bill extraterritorial legislation to make business executives responsible for slavery in their supply chains, and by supporting a binding protocol on the ILO convention on forced labour to strengthen international standards against forced labour."

In 2005, the ILO put the annual illegal profits from forced labour at $44bn. It estimated that those subjected to such conditions lose at least $23bn a year in unpaid wages and recruitment fees.

According to the UN global initiative to fight human trafficking, the trafficking of people is the fastest-growing form of international crime and the third-largest criminal industry after drugs and arms trafficking.