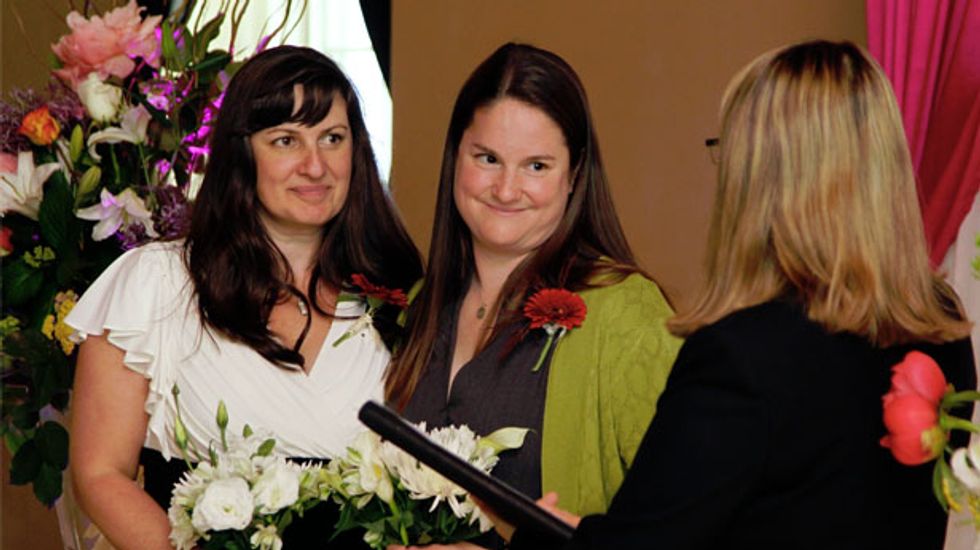 (Reuters) - A prominent opponent of same-sex marriage has asked the Supreme Court to suspend an Oregon federal judge's ruling that the state's gay marriage ban was unconstitutional, he said on Tuesday.

John Eastman, chairman of the National Organization for Marriage, wants to make his case against four same-sex couples' successful challenge to the ban, which District Judge Michael McShane overturned on May 19.

The U.S. Supreme Court in January postponed a Utah district judge's ruling that found the state's gay marriage ban was unconstitutional, but not before more than 1,000 couples married.

Oregon's Attorney General said in February that she would not defend the 2004 voter-approved amendment to the state's constitution to define marriage as being exclusively between a man and a woman.

"In Oregon, not only do we have a single trial court judge imposing his own opinion and invalidating the votes of the overwhelming majority of Oregon voters, but the case involves the state Attorney General refusing to even mount a defense of the people’s decision," Eastman said.

The 9th U.S. Circuit Court of Appeals previously refused a request by the group to halt the proceedings.

The Oregon ruling was one of several victories this month for advocates of extending marriage rights to same-sex couples.

Those rights have been extended to include gay men and women in more than half a dozen states, a trend that has gained momentum since the Supreme Court ruled in June that legally married same-sex couples nationwide are eligible for federal benefits.

Al Schmidt, a Republican former Philadelphia city commissioner, raised alarms on Wednesday about his own party's nominee for governor.

During an interview on CNN, Schmidt said it would perilous to democracy if the state were to elect Trump-backed candidate Doug Mastriano to be its next governor.

Behind the Joe Biden v. Jeff Bezos beef: What their inflation spat is really about

The White House clapped back at Amazon CEO Jeff Bezos on Monday after the multibillionaire criticized the president's plan to combat inflation with steeper corporate taxes, saying that "it doesn't require a huge leap to figure out why" Bezos, whose $1.63 trillion company paid no taxes last year, would be opposed to the plan.

The online crossfire began on Friday, shortly after President Biden took to Twitter by saying, "You want to bring down inflation? Let's make sure the wealthiest corporations pay their fair share."

Last weekend, my neighborhood in New Haven hosted a small arts festival. Friday was for adults. There was beer. There was loud music. There was a fashion show. All but one model was Black or of color. The audience was a third white, a third Black and a third everyone else.

I was reminded of why I love the Elm City.