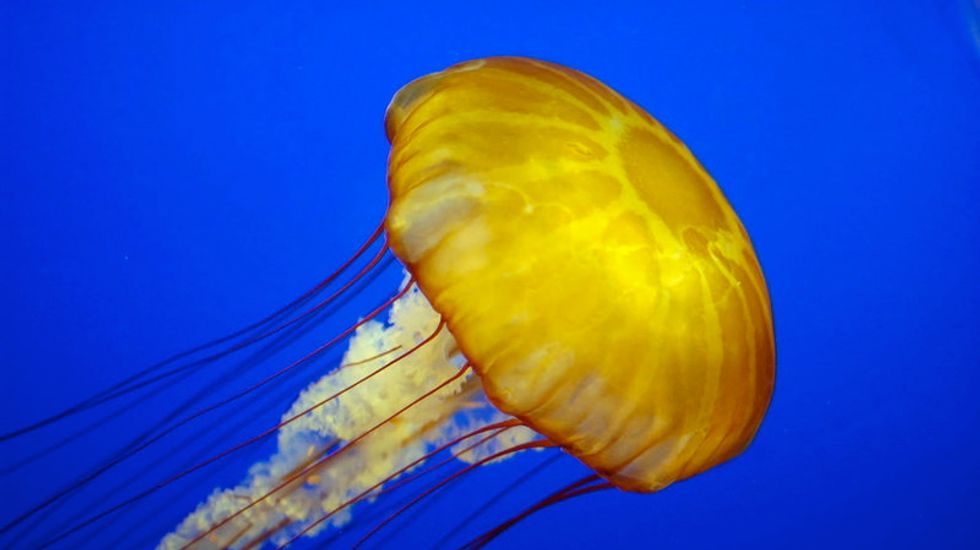 Scientists in Italy say they have discovered a new species of jellyfish in the Gulf of Venice.

Sightings of yellow jellyfish in the North Adriatic Sea were reported to a citizen science project last year, said Ferdinando Boero, a zoologist.

"People were saying, this jellyfish is not in your poster [of the region's known jellyfish], we don't know what it is," said Boero, from the University of Salento. "They were in their thousands. Fishermen had them in their nets. They couldn't fish easily because there were so many jellyfish."

Scientists including Boero set about trawling records of known jellyfish species to try to identify it, but found no match. "It's a new species," said Boero. The team decided on the name Pelagia benovici, after a late colleague, Adam Benovic.

They found that it bore similarities to Pelagia noctiluca, a mauve jellyfish known for its venomous stings, which wiped out a 100,000-strong salmon farm in Northern Ireland in 2007.

Could this new species pose the same kind of threat? "We really don't know because there have not been so many investigations besides what it is. What it does is a completely different story," said Boero. "There have to be more investigations about it."

Quite how Pelagia benovici got to the North Adriatic and within the Venice lagoon remains a mystery. Scientists think it was probably introduced to the area in the ballast water of ships. In the 1980s, Mnemiopsis leidyi, a kind of comb jellyfish known as the sea walnut, was suspected to have been introduced into the Black Sea via the ballast water of merchant ships. Its arrival caused a dramatic decline in the local fish populations.

The jellyfish-spotting project is no longer receiving reports of Pelagia benovici, whose sudden appearance appears to have lasted until March. "But jellyfish have this erratic distribution. They are present in their millions, then they disappear and then they come back," said Boero.