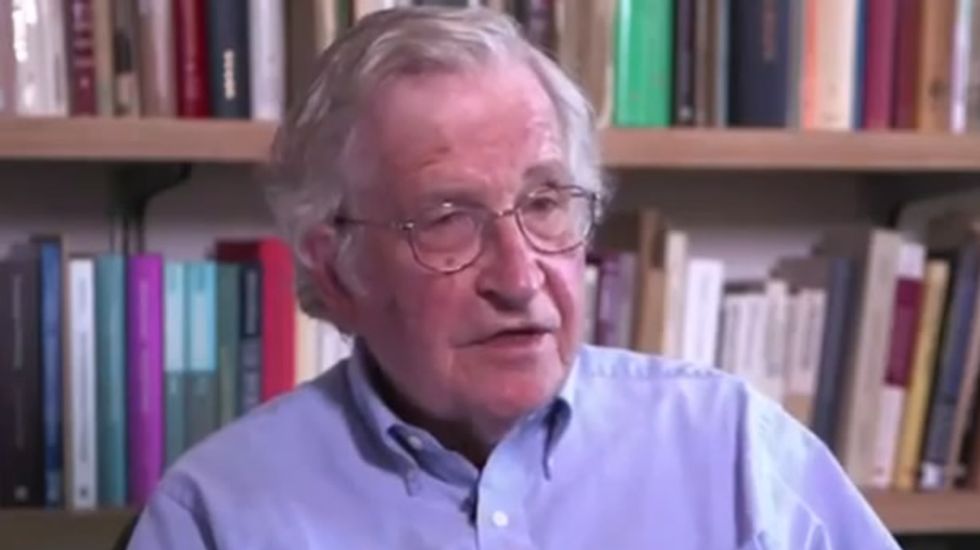 Noted leftist thinker and pioneering linguist Noam Chomsky recently sat down at the University of California, Santa Barbara, for a wide-ranging discussion titled "Propaganda Vs. Reality."

The host of the event, Professor Jan Nederveen Pieterse, began by noting that there would be, the next day, "a party celebrating the 1 percent."

"We live in an era," he continued, "when Hollywood celebrates idiots as culture heroes -- The Great Gatsby, The Wolf of Wall Street. So is there good news for the 99 percent, and [if there isn't] what kind of news would you be looking for?" Pieterse asked.

"The good news is that there are people like you," Chomsky replied. "People committed to overcoming the narrowness of the spectrum of political discussion and the enormous oppression and inequities of society. That there are people trying to end the extremely ominous threat of nuclear war or environmental catastrophe -- that is good news."

"But that's always the good news," he continued. "Class war goes on all the time, it's usually just one-sided. The business classes are very dedicated to class war. Constantly fighting it, so the question is whether there will be an opposition."

"When you see rising opposition, that's the good news."

When asked about the fate of those in a capitalist society who are living "a precarious existence," Chomsky said that "from the point of view of those conducting the class war -- part of the business classes and the government -- the best thing would be to have a population which is living a precarious existence."

"This is not a secret," he added. "It's very well-understood by those waging the war. The clearest statements of it was by a man who used be called 'Saint Alan' [Greenspan] before 2007, when the system he carefully constructed crashed totally. When he was testifying in the late '90s, about the marvels of the terrific economy he was running, he explained that it was based on what he called 'the growing worker insecurity.'"

He went on to discuss the implications of economies depending upon on insecure workforces before moving on to topics ranging from the Syrian civil war to the power of the Israeli lobby in American politics.

Watch the entire conversation about "Propaganda Vs. Reality" below.