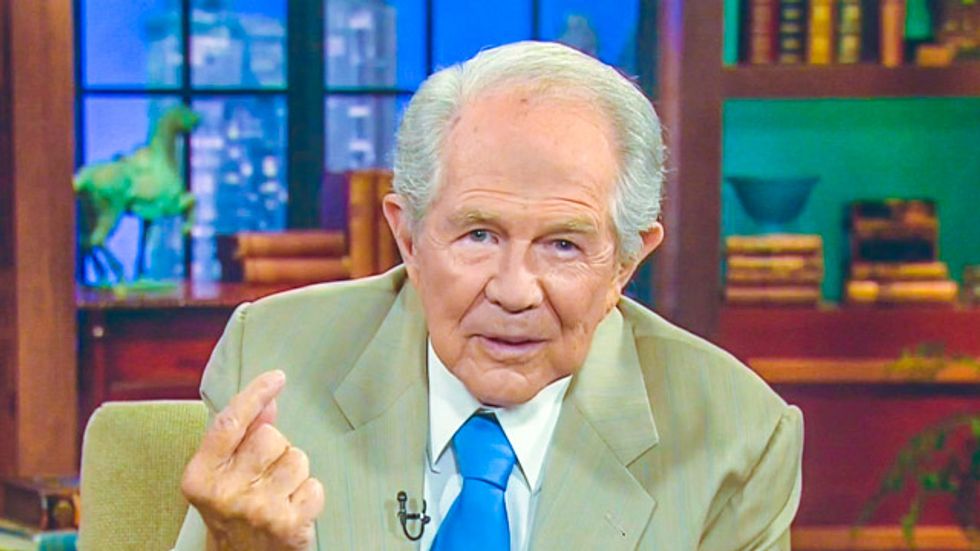 Television preacher Pat Robertson on Tuesday advised a viewer -- and his co-host -- that they were "supposed to" reward their husbands with sex for helping with chores around the house.

A viewer named Carol wrote into the 700 Club because she said her husband "respects Pat's opinion," and she hoped the televangelist would side with her regarding a dispute about house cleaning.

"[M]y husband has always felt the need to point out when he helps with chores around the house," the woman explained. "When he washes the floor, or does anything else, he always says, 'Remember, I did that for you.'"

The viewer argued that her husband should stop viewing chores as a favor.

"I feel since we both live in the same house, he isn't only helping me but the family," she said.

Unfortunately, Robertson probably did not give the woman the answer she was looking for.

Although CBN co-host Terry Meeuwsen didn't buy Robertson's advice, she called it a "wonderful perspective," and she publicly thanked her husband for doing the dishes.

"He's saying, I love you!" Robertson insisted. "Each dish, he's saying, 'Terry, I love you.' If you understood that, you say, 'Darling, I've got a treat for you... wait until we get behind closed doors, and you see the treat I have for you.'"

"You got it?" he asked Meeuwsen. "How to have a happy marriage, according to Pat."