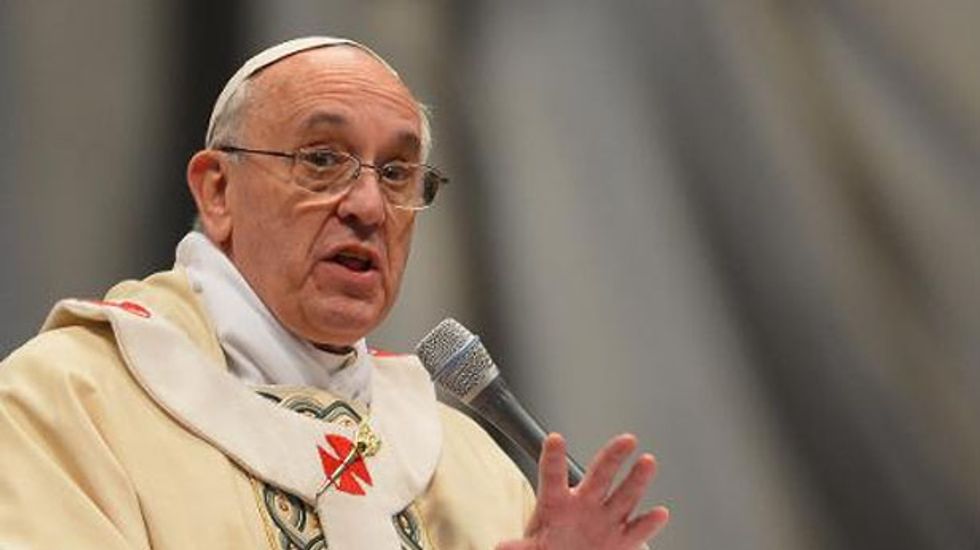 Vatican says purpose of visit is mainly religious, but political spectres hang over three-day tour of Jordan, Palestine and Israel

In a refugee camp near Bethlehem, final preparations are being made for Pope Francis's first official trip to the Holy Land, which begins on Saturday night. On Saturday, in the Phoenix Centre, a modern community hall on the outskirts of the Deheisheh camp, Francis will sit with children from Palestinian refugee families. They will sing to him, show him their pictures and receive a blessing. After barely 15 minutes he will be whisked away on the next leg of his three-day tour of Jordan, Palestine and Israel.

The walls have been hung with giant composite pictures – archive images of the displacement of Palestinian refugees in 1948 merged with pictures documenting the changing Palestinian landscape until the present day.

Walls in streets across Bethlehem, through which the Pope will drive in an ordinary, non-bulletproof car, carry images from the same project, comparing the Palestinian experience to the suffering of Jesus. The point of these pictures, curator and director of Jack Persekian explained to the Guardian, is to emphasise to the pope the continuity of Palestinian experience since 1948.

In Israel, banners welcoming the pontiff hang from west Jerusalem lampposts. Almost 9,000 police have been drafted in to protect Francis.

A handful of Jewish religious radicals who it had been feared might try to disrupt the visit have been placed under administrative orders, and roads and some checkpoints to the West Bank will be sealed.

The Vatican has insisted that the purpose of his visit is primarily religious – to mark the anniversary of the meeting 50 years ago between Pope Paul VI and the ecumenical patriarch of Constantinople, Patriarch Athenagoras – and "absolutely not political". But the symbolism engrained in the political landscape Israel and Palestine – both religious and secular – has been impossible to avoid. Here are some of the political spectres hanging over his tour.

Visit to the 'State of Palestine'

The Vatican and Palestine are both non-voting observer nations in the UN's general assembly, but it has been noted by some as significant that the Vatican's own schedule for the visit refers to Mahmoud Abbas as "president of the State of Palestine". Ten months of meetings between the Palestinian Authority and the Vatican over a deal expected to be signed this year on the Catholic church's status in areas governed by the Palestinian Authority have also been treated as negotiations between sovereign states. Vatican spokesman Rev Federico Lombardi has said that the use of "state of Palestine" reflects the UN general assembly's 2012 resolution upgrading Palestine's status, although it has irritated Israeli officials.

On the highest hill overlooking the town, the rarely used facility was built in 1995. Both Israeli settlement building and sections of the Israeli separation wall are visible from the landing pad.

The pope insisted on meeting "ordinary people". The children chosen are from "families with someone who was martyred, injured or jailed − and also some ordinary people as well", said the centre's director, Mamoun Lahham. Each child will wear a T-shirt with the name of the village the family was originally displaced from.

After negotiations between the Palestinian Authority and the Vatican, Francis's route through Bethlehem will take him within a few metres of an imposing section of the Israeli separation wall that now cuts the old road from Jerusalem to Hebron near Rachel's Tomb. At this point there will be refugees from two camps lining either side of the road. The routing will create a photo opportunity that places Francis against the backdrop of one of the most visible signs of the conflict between Israelis and Palestinians.

Unlike his predecessors Pope John Paul II and Pope Benedict XVI, the only large-scale open mass of the visit – for some 9,000 people – will be in Manger Square, Bethlehem. Because of the security operation surrounding Francis while he is in Jerusalem, Palestinian Christians in the city have expressed their disappointment that they are unlikely to encounter him.

Francis will meet Mahmoud Abbas in the presidential compound in Bethlehem,but his official meetings with Israeli political leaders have been arranged to avoid the contentious international status of occupied East Jerusalem. He will be officially welcomed to Israel by President Shimon Peres after flying by helicopter to Ben Gurion airport in Tel Aviv from Bethlehem. His private meeting with the prime minister, Binyamin Netanyahu, will be at the Notre Dame centre in Jerusalem, which is Vatican sovereign territory.

Mass in the Cenacle

For a minority of Jewish religious extremists, the most controversial part of the trip will be a visit to the Cenacle – or the "room of the Last Supper" – in Jerusalem. Located on the second floor of a stone complex on the remains of a Byzantine church in the Old City, before the Ottoman period the building was administered by the pope's own Franciscan order until the mid-16th century. The place is also regarded as sacred by Muslims and by Jews who say it is the site of the Tomb of King David. It has been the focus of two decades of negotiations between the Vatican and Israel over religious access as Christians are permitted to visit and pray there but not usually celebrate mass. Following rumours – denied by the Israeli authorities – that Israel planned to hand the site to the Vatican, and fearing disturbance by Jewish hardline youth to the visit, Israeli police have placed around a dozen under administrative orders.

Underlining the interfaith and ecumenical nature of the short visit, the pope's delegation includes a rabbi and a Muslim cleric and he will meet the grand mufti of Jerusalem and the two chief rabbis. Francis will visit sites regarded as holy to the three main monotheistic religions: the Western Wall, al-Aqsa mosque and the churches of the Nativity and Holy Sepulchre. This has led to some complaints from Catholic and Christian faithful that there is too much emphasis on inter-faith relations and not enough on the local faithful.

Like all heads of state who visit Israel, Pope Francis will visit the Holocaust memorial at Yad Vashem. He will also lay a wreath at the grave at the founder of Zionism Theodor Herzl on Mount Herzl. Pope Francis's friend and fellow Argentinian Rabbi Abraham Skorka, who is part of his delegation, said last week: "That is a meaningful act. He understands the importance of the land of Israel and the state of Israel to the Jewish people."