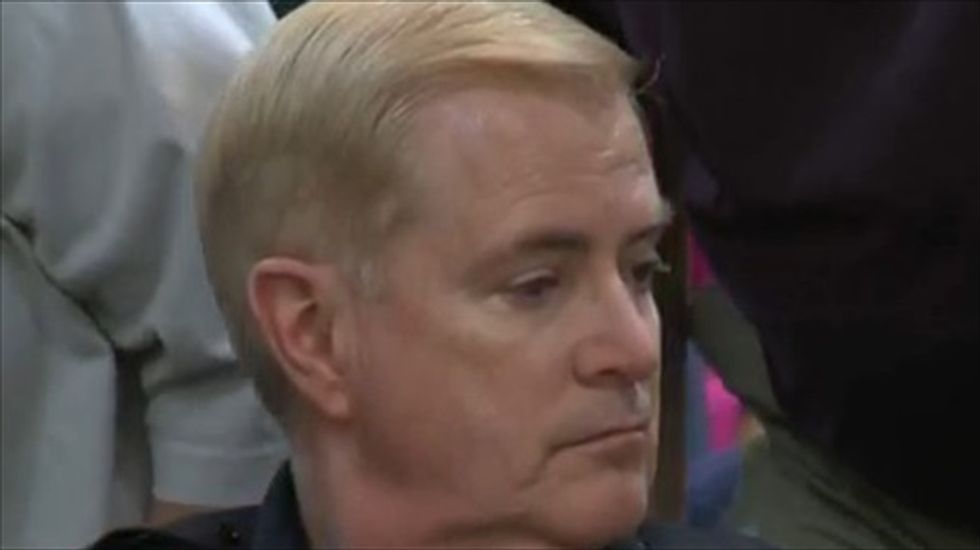 A group of more than 40 demonstrators forced the Albuquerque City Council to cancel its meeting Monday night after taking over the council chambers and attempting to serve Police Chief Gordon Eden with a "people's arrest warrant," KRQE-TV reported.

"This is no longer your meeting, this is the people's meeting," one demonstrator, University of New Mexico professor David Correia, told the council. "This is democracy in action."

Eden and his department have drawn widespread criticism for what has been described as a pattern of excessive force, particularly following the release of footage showing shooting and killing 38-year-old homeless man James Boyd in March 2014. A report by the U.S. Justice Department last month blamed "insufficient oversight, inadequate training and ineffective policies" for the department's regular use of deadly force.

On Monday, one demonstrator attempted to physically hand Eden a "warrant," but he left the chambers without acknowledging her or taking the paper, while council members tried in vain to quell the unrest before them.

"We have no control of this meeting," council president Ken Sanchez was quoted as saying. "So if this is your meeting, go ahead."

Sanchez and other council members then said they were taking a 5-minute recess, during which time the protest continued, with calls for both Eden and Mayor Richard Berry to be fired. The Albuquerque Journal reported that the demonstration turned into a "People's Council" meeting, which held votes of no confidence against Berry and Eden.

"It just seems like it's been increasingly hard for us to even do our business, whether it's about this or other matters," council member Isaac Benton told the Journal. "If anything, it's demoralizing for those of us on the council who are trying to do something about the problem."

Police later released a statement saying the department was "working hard to make proactive improvements" in light of the harsh report by the Justice Department.

"While we welcome constructive discussions, we do not believe disruption of tonight's city council meeting was a productive way to meet those goals," the statement read.

Watch KRQE's report, as aired on Monday, below.