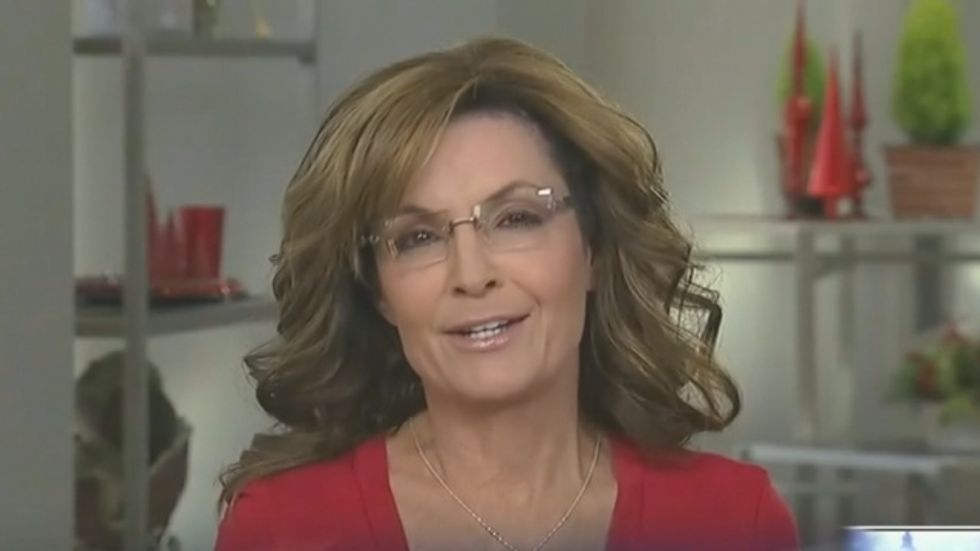 When we last saw Sarah Palin,  -- Half-Term Governor of The Northern Territories, Mother of GED Students, Destroyer of Words -- she was fresh off of a featured speaker gig at the NRA's annual Blood Frenzy Circle Jerk. Depending upon your point of view, her speech went over boffo or she put her Naughty Monkey-shod slingback in it when she proudly said that she would like to to throw a Baby Jesus shower for each and every swarthy type she could get her  hands on when they are not full of grifted rube bucks.

This did not sit well with the churchgoing folks who set about calling her a blasphemer and woman of ill will.  It's almost as if they didn't know her already.

So Sarah laid low for a few days after telling those namby-pamby turn-the-other-cheek fake Christians to 'buck up or stay in the truck':

If some overly sensitive wusses took offense, remember the First Amendment doesn’t give you a right not to be offended. Perhaps hypocritical folks who only want Freedom of Speech to apply to those who agree with their liberal agenda might want to consider that the evil terrorists who were the brunt of my one-liner would be the first to strip away ALL our rights if given the chance.

Why do Christians hate America?

Many is the time I have asked myself that.

But now Sarah is back and talking trash about that #BringBackOurGirls thing that was a 'thing' about a week ago. Sure, she's late to the party, but if you're a Palin gal, 'better late than never' is more than something you say  once every month.

Dictating to someone with college level fancy type readin' and cipherin' skills, Sarah is hootin' and hollerin'on her ShoutyFace internet hangout, once again  explaining what she would do if everyone in America suffered blunt head trauma and then  mass-elected her President and she had to deal with terrorists who weren't close enough to dunk like an Oreo.

Short version: track them down and kill them like they were a baby wolf fleeing a low-flying Piper Cub full of drunken 'sportsmen.'

More importantly she wants President Nobummer to quit Twittertwatting executive orders because that is no way to be an executive, which she briefly was before she up and quit-ed-ed.

Diplomacy via Twitter is the lazy, ineffectual, naïve, and insulting way for America’s leaders to deal with major national and international issues. It’s embarrassing.

Sarah is speaking of Michelle Obama's tweet holding a #BringBackOurGirls sign and we have to assume that she thought Michelle Obama was Barack Obama because, everyone knows, all of those black people look alike or something.  Of course, Sarah disregards the fact that the US government has already been providing help to Nigeria which coincidentally is in the Africa that Sarah thinks is a country.

And what is the Obama administration’s weapon of choice in this battle for these young girls’ lives? Hashtagging tweets on social media! I kinda-sorta doubt a tweet will intimidate the kidnappers much. So, if you’re going to jump in and do something about these Islamic terrorists at all, then do it right, do it firmly, and kick their ass.

Unless they are faced with an ethics investigation.

Or they hate working.

Or Katie Couric is stopping by to give a pop quiz.

So, hey Barry Bammer Coward Girly President Man, stop hiding behind those social media Twitter skirts  that you are totally not tweeting or Sarah Palin will have her scrivener scriven some more words together for her Facebook Wall of Sick Burns.

I, on the other hand, have no such limitations, so: #ShutUpDumbLady