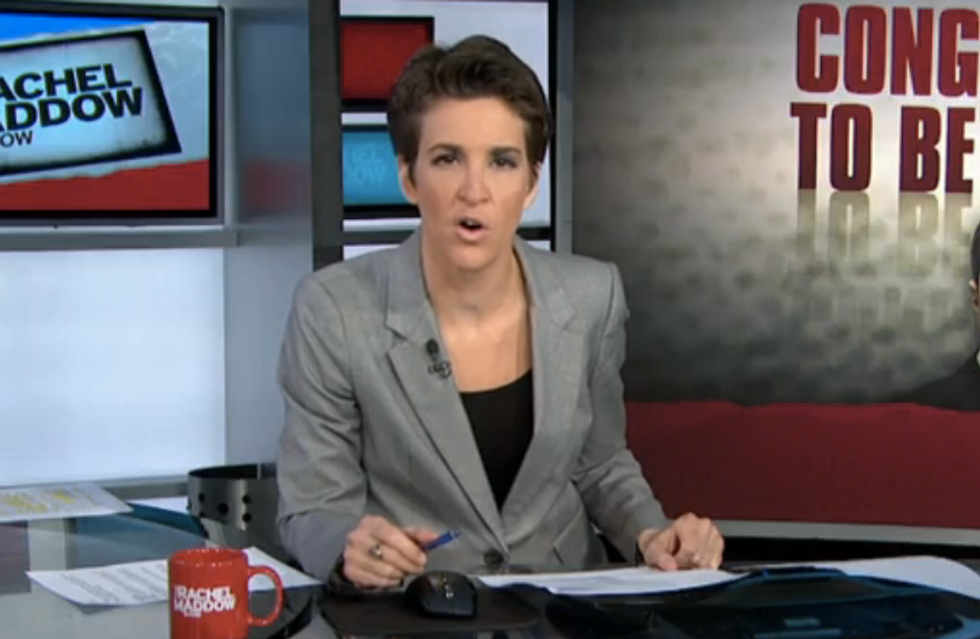 On Friday night, MSNBC's Rachel Maddow used scenes from the film "Monty Python and the Holy Grail" to explain how the desperate Republican quest to find a scandal in the attack on the U.S. consulate in Benghazi is like the witch trials of Salem, MA.

In Colonial Massachusetts, innocent women were tortured and killed on suspicion of witchcraft. Their inquisitors would present a set of impossible tests, then use the women's failure to pass them as evidence of witchery.

This has given us the modern day term "witch hunt," which is a fraught search for a villain that doesn't exist. However, Rep. Pete Sessions (R-TX) said on the House floor Friday, "[Democrats] would blame our insistence upon getting the truth as a political 'witch hunt.' Well, Mr. Speaker, that must mean that there's a witch somewhere."

"Nope," said Maddow. "It's exactly the opposite of that. Congressman Pete Sessions of Texas, that is not what 'witch hunt' means."

"Doesn't anybody let Republican members of Congress at least watch Monty Python?" she asked, rolling the clip from "The Holy Grail" in which a group of Medieval villagers accuse a woman of witchcraft.

When asked why they think she's a witch, the villagers shoved her forward and said that she looks and dresses like a witch.

"They dressed me up like this," the woman said. "And this isn't my nose, it's a false one."

Nonetheless, the villagers have decided they're going to have a witch burning, and any witch will do, much like the Republican Party's fixation on Benghazi and their hopes that the scandal will be severe enough to cripple former Sec. of State Hillary Clinton's chances in the 2016 election.

"The whole point, the whole idea of the witch hunt," Maddow said, "is that she's not really a witch, right? They weren't really witches."