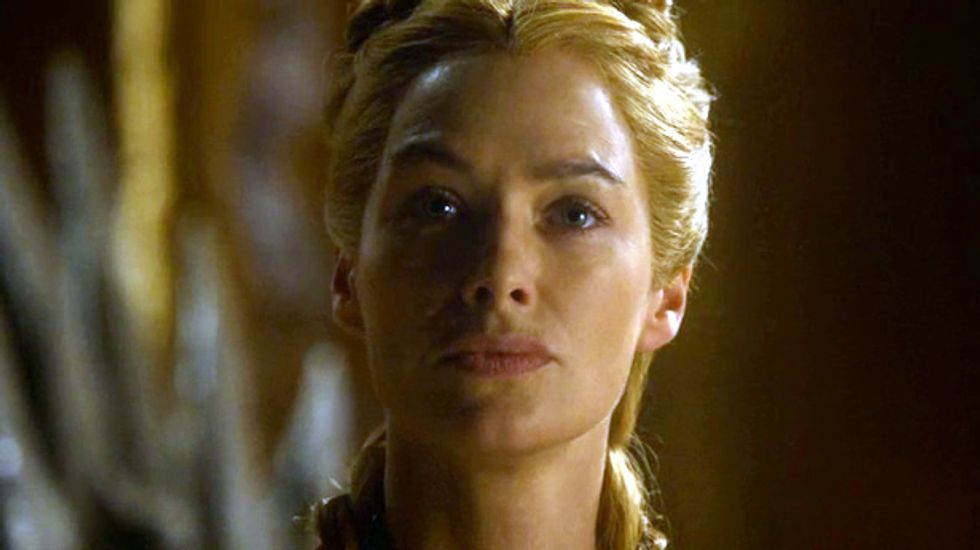 “First of His Name,” the latest episode of Game of Thrones, begins with the crowning of King Tommen, the first of his name, an event which is met with a rousing shout of “long may he reign, etc. etc. etc.” He's barely a king and you already feel for him, the poor bastard.

Especially when he attempts to exchange googly eyes with his former aunt and future wife, Margaery, only to be interrupted by his mother. Cersei then approaches her soon to be sister-mother and acknowledges that the recently deceased Joffrey “would have been your nightmare,” which is surprisingly honest for her. Clearly, she has no ulterior motives.

Nor does Jorah Mormont, over in Essos, who suddenly knows everything that's happening in Westeros. Ser Barristan recommends Dany take her 8,000 Unsullied and 2,000 Second Sons and storm the Blackwater Bay, because that has never not been successful. He also informs her that the slave-cities she's liberated are in the process of being unliberated by the very forces she thought she'd overthrown, indicating not only the fragility of freedom, but the potential emptiness of all of Dany's heroic moments of late.

Grand gestures are grand and all, but the changes need to be a little more permanent if they're to be anything more than just gestures.

“Why should anyone follow me?” Dany asks, and rightfully so, before adding, “I will not let those I have freed slide back into chains.” A superb idea, that is, and how does she expect to do that?

“I will do what queens do,” she says, beginning a thought that most free people wouldn't find auspicious.

“I will rule.” Because nothing says freedom like being ruled.

The scene then shifts to the gates outside the Eyrie, where Littlefinger leads Sansa Stark into a situation which the word “uncomfortable” doesn't even begin to define. It begins with a conversation that clearly isn't about sex, and certainly not about rape, but is entirely about the force that's required to pound through the Bloody Gate and lay claim to the Eyrie.

Sansa is then introduced to her aunt, Lysa Arryn, and her cousin, Robin Arryn, who was last seen suckling at his mother's breast while screaming for Tyrion to be thrown out the Moon Door. He has not grown much – intellectually or otherwise – since then, as his enthusiastic hug of “Uncle Petyr” suggests.

Lysa Arryn seems not to have grown any wiser with the passage of time, as she praises Sansa for “being of her blood,” as if that's an accomplishment, or something to be desired. It's worth pausing for a moment to note that the events being briefly discussed to in this scene are actually the most critical discussed in the episode, if not the entire series.

Robin Arryn tries to bond with Sansa by saying, “they killed my father too, with poison.” The line is tossed off, but its import shouldn't be – the death of Jon Arryn is what started everything, the veritable snowball at the top of a hill that grows ever bloodier as it wends its way down. Arryn discovered Cersei and Jaime's secret and was killed for it. Ned Stark was killed after he started investigating what killed Arryn. Rob and Catelyn Stark were killed and need I really go on?

Because the point here is that Lysa credits Littlefinger with having poisoned Jon Arryn, which if true, would make him the “Prime Mover” of the entire series. Of course, Littlefinger also took credit for poisoning Joffrey, so at this point, he's a little like Al Qaeda, claiming to have done all the bad things but having no proof besides the claiming. At this point, if he claimed to have hijacked Malaysian Air 370 but somehow botched the landing, the audience – and CNN – would be inclined to believe him, if only because he's made similar mistakes before.

Then, because everything wasn't already disturbing enough, the audience gets to watch Sansa listening to Petyr and Lysa re-consummating their marriage. Because, as I said, there's nothing about this trip to the Eyrie that isn't disturbing.

After two brief interludes in which Cersei is informed she's broke and Arya informs the Hound he's dead, director Michelle McLaren returns to the Eyrie for more disturbing “fun.” It was not enough that she previously asked Sansa whether Tyrion had “forced himself” upon her, now she's plying her with lemon cakes and demanding she tell her “the vile things” she's allowed Petyr to do with “her young pretty body.”

“Are you pregnant?” Lysa asks.

“I'm a virgin,” Sansa repeatedly assures her, to which Lysa responds, “Girl, you'll be a widow, soon.”

Cut to Brienne and Pod having an adventure in horseback riding: 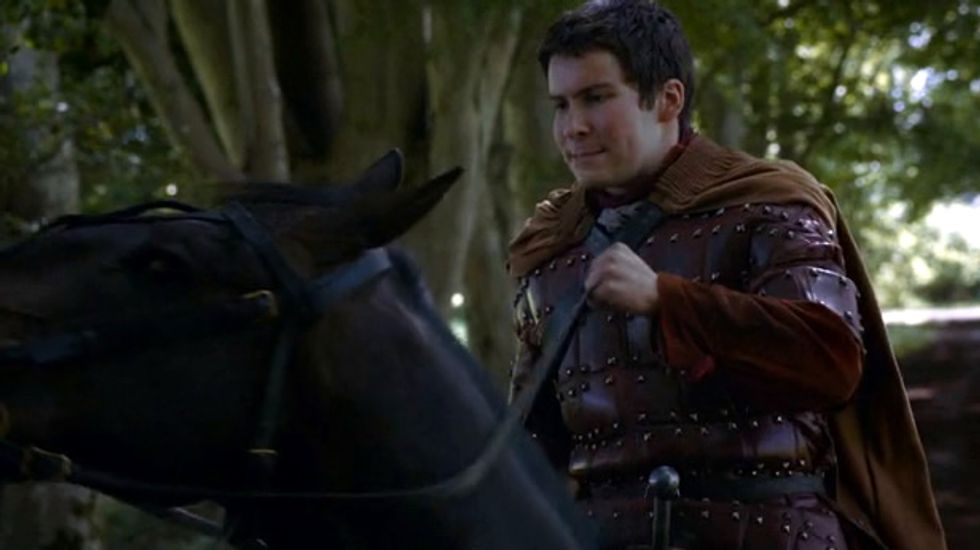 He is really terrible at it. That's the point of this scene, his terribleness at horseback riding and Brienne's willingness to put up with it. The next scene makes a similar point, albeit with different characters, as the Hound chastises Arya for the delicacy of her water-dancing. The show continues its trend of replacing nudity with profanity as the Hound insults the memory of the beloved Syrio in language better not repeated.

Cersei schemes with Oberyn, who informs her that "in Dorne, we don't hurt little girls."

"Everywhere in the world they hurt little girls," she says, acknowledging both a sad universal truth and her own troubled youth. It's almost as if the show wants the audience to feel Cersei's pain, or at least feel enough of it to ignore all the pain she has caused, and will cause, others.

Like her brother, Tyrion, who is absent from this episode outside his penchant for wine. "I poured wine for him," Pod informs Brienne in yet another attempt to indicate that he really wants to squire her.

And with that, the episode moves to Craster's Keep and the seemingly inevitable reunion of Jon Snow and his half-brother, Bran Stark. But it is not to be, as the Bolton spy, Locke, is sent in first, damn it. At least, however, the audience is treated to his death, as well as the deaths of the other traitors of the Night's Watch -- many at the hands of Jon Snow.

Bran wargs into Hodor again, too, and it's against Hodor's will again, too. Is taking people's bodies against their will starting to become a recurring theme?

I'll answer that for you: Yes, it is.

Of course, this episode is not entirely bereft of reunions: 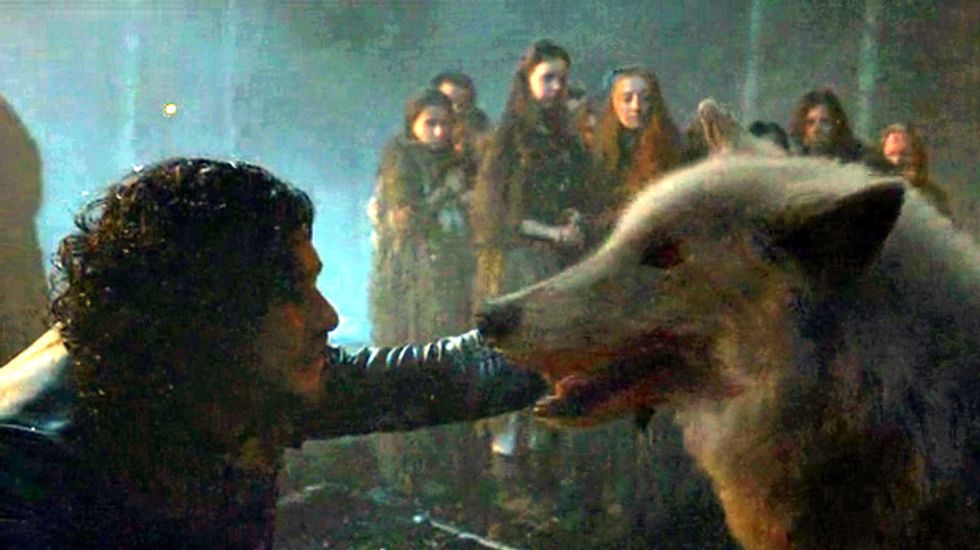 If you didn't tear up, just a little bit, at the sight of Jon greeting Ghost, something inside you is as dead as Craster, as ashen as the remains of his keep.