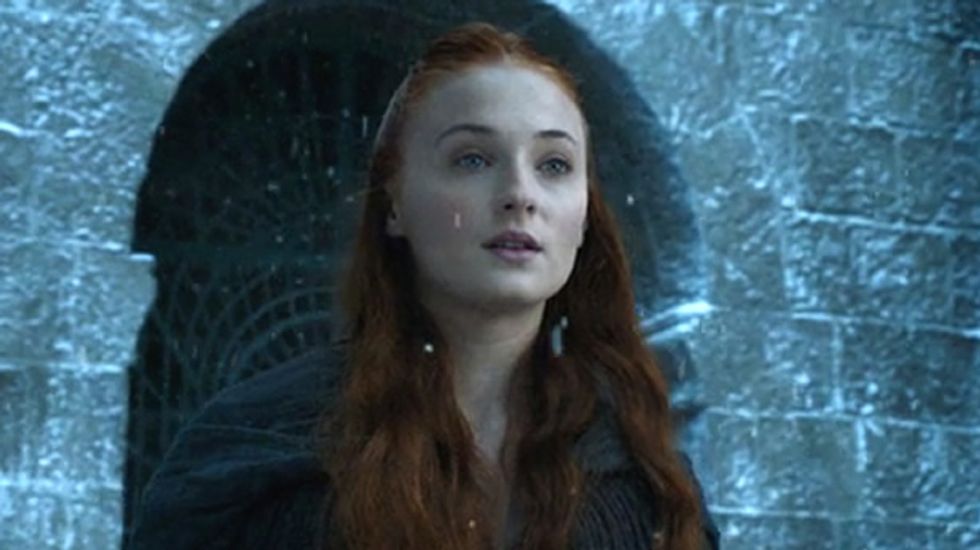 "Mockingbird" begins with the first act in the three-act play "Who Will Be My Champion," which at this point Tyrion believes he's the one directing. Jaime admonishes Tyrion for his spectacular speech in "The Laws of Gods and Men," because it means that all of Jaime's plans have unraveled -- not that that's a situation Tyrion regrets, since it also means that his father Tywin's are also in shambles. After revealing to his brother why he rejected a life at the Wall -- "I've fallen in love with a whore, and I was stupid enough to believe she'd fallen in love with me" -- Jaime reveals that he won't be able to serve as Tyrion's champion, so the condemned man asks his brother to find his former champion, Bronn.

Cersei plans on using the Mountain are her champion, and the audience is reminded of how powerful the Mountain is with a brief scene in which he skewers random extras.

Meanwhile, the Mountain's brother continues adventuring with Arya Stark. They come across a man whose imminent death has him waxing philosophical about nothingness. "Nothing could be worse than this," Arya tells him. "Maybe nothing is worse than this." The dying man then speaks of fairness and balance, and the lack of it in the kingdom now. "Dying is thirsty work," he tells the Hound, hoping the universe will be fair and balanced enough to allow him to die with wine on his lips. Alas, it is not, but the Hound stabs him through the heart, mercifully.

"This is where the heart is," he says. A minute later, Arya proves she's a quick study when she meets Rorge -- one of the other two men in the cage with Jaqen H'ghar -- for the second time. This time, however, she's not "Arry Stark," the little boy, but Arya Stark, who is becoming so much more than that. It's the first, but not the last, time in this episode that the audience is presented with a compelling reminder of how far Arya Stark has come.

Jon's at the Wall, but Ghost isn't welcome. Jon demands the brothers of the Night's Watch make preparations -- that they seal themselves on the side of the wall that won't be overrun with monsters. He tries, but fails, to convince Ser Alliser the bars on the gates won't stop giants.

On to the second act in what Tyrion stills believes is his play. Enter Bronn -- dressed up all pretty. He informs Tyrion that Cersei has arranged for him to wed the dim-witted Lollys Stokesworth. When Tyrion protests, Bronn informs him that "if I wanted wits, I'd married you." "You and my sister deserve each other," Tyrion tells Bronn, in what may actually be a compliment, of sorts.

Bronn then reveals what the earlier scene established: anyone with sense fears the Mountain. "One misstep, and I'm dead," he tells Tyrion. "I like you, I just like myself more," he says, clearly breaking up with him.

"We had some good days together," they both might as well have said simultaneously. But clearly, those days are gone: 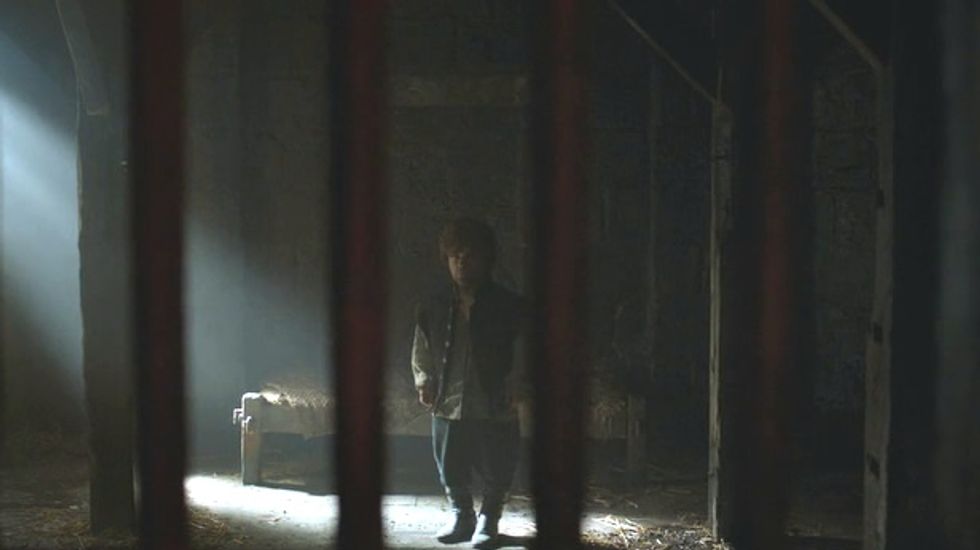 Meanwhile, in Meereen, Dany and Daario are doing the opposite of Tyrion and Bronn -- the Lord and the sellsword are coming together instead of drifting apart. Dany realizes she can order him to take off his clothes, and in yet another uncomfortable moment this season, he obliges. That he wanted to doesn't change the fact that she enjoyed it more because she realized she could order him to.

Melisandre lets her guard down, and reveals that for all her holy airs, she's more than willing to use deception to lead people to the light. She's insisting that while her public face is all about the black and the white, in private, she's all about the grey. Instead of shaking Queen Selyse's faith in the Lord of Light, however, it only makes her seem to trust Melisandre more.

Back in Meereen, Jorah encounters Dario making the walk of shame. After some awkward small talk, Dany reveals that she's sent Daario and the Second Sons to reassert control over Yunkai, and that she's ordered the masters to be slaughtered. For Dany, at the moment, everything is either black or white, and instead of seeing the possibility of something in between, she simply moves between the two.

"I will end slavery," Dany says, and she plans to do so by killing all the masters. Again. Jorah's trying to temper her bloodlust, and he does so successfully, sort of. "They can live in my new world," Dany says, "or they can die in their old one."

After that little bit of binary, it's refreshing to return to Arya and the Hound, being that they're the very picture of moral ambiguity. The Hound is throwing himself a pity party, and everyone's invited! "The worst thing was that it was brother who did it," the Hound tells her, speaking of the burns on his face, "and my father who protected him, told everyone my bedding caught fire." Arya offers to help treat his wound, and the intimacy of the extreme close-up suggests that it's not just the one on his neck she's treating: 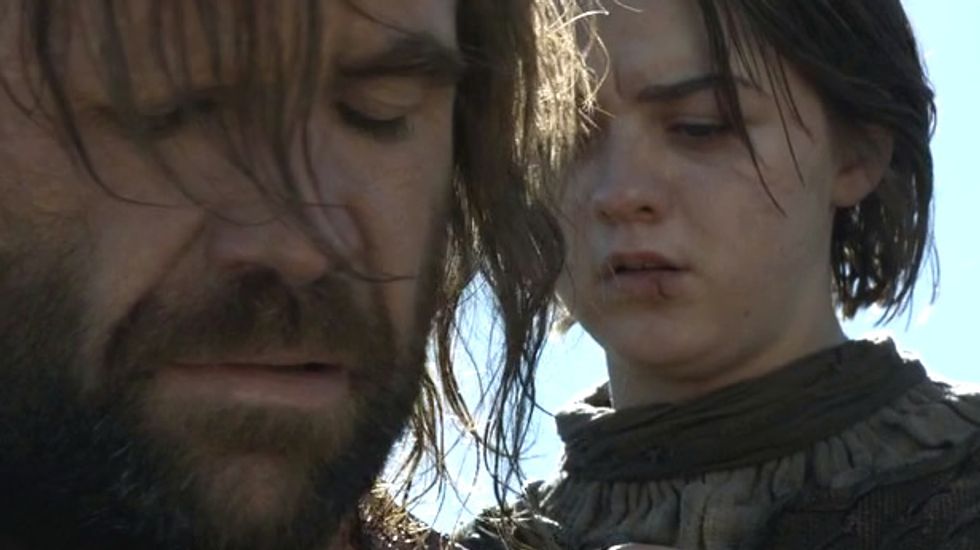 Back to Brienne and Pod. "Don't get drunk," she tells Pod, who half-listens. Hot Pie serves them a kidney pie, and serves the audience a reminder of who Arya Stark used to be -- the crowd she used to run with, as it were, before she hooked up with the Hound. "You cannot give up on the gravy!" Hot Pie insists, because that's the sort of thing Hot Pie would insist about.

Later, Pod tells Brienne that he doesn't think she should be telling people who they're searching for, then Hot Pie comes out and proves him wrong, delivering the first word anyone's heard of Arya since her father's beheading. Significantly, Hot Pie notes the manner in which "Arry" resembled Brienne, but as the audience has been reminded throughout this episode, he doesn't know the half of it.

They come to a fork in the road, literally, because "Mockingbird" is obsessed with either/or decisions.

Finally, it's Act Three of Tyrion's play, in which it's revealed not to have been Tyrion's play at all. Oberyn informs Tyrion that Cersei approached him and tried to sway him against Tyrion. "It is rare to meet a Lannister who shares my enthusiasm for dead Lannisters," he says, before launching into the story of the first time he met Tyrion. "You were a disappointment," he says, because "all everyone talked about was the monster that had been born to Tywin Lannister."

He says that Cersei teased him for some time before letting him see "the freak," but when she lifted Tyrion's covers, there was "no claw" and "no red eye." "That's not a monster," he recalls saying, "that's just a baby."

Oberyn then reminds Tyrion of what he said the first time the latter remembers having met him, outside Littlefinger's whorehouse. He wants "justice" for his sister and her children, who were murdered by the Mountain, and he has come to the perfect place to get it.

He agrees to be Tyrion's champion.

Sansa's at the Eyrie, which looks very much like Winterfell, which is appropriate, because she's built a little model Winterfell out of snow. Sansa wonders if she remembers what her home even looked like, when Lord Robin enters and asks a series of awful questions -- "Does Winterfell have a Moon Door?" "How do you make people fly?" "What do you do with people you don't like?" -- then makes an awful suggestion for her tiny Winterfell -- "Let's put a Moon Door in it!"

Sansa slaps Robin, he runs away, and Littlefinger applauds her efforts. Then he gets creepy, answering Sansa's question about why he killed Joffrey by saying it's because of how much he loved Lady Stark. He tells Sansa, "you might have been my child," then he kisses her anyway.

Lysa, of course, sees, and invites Sansa to stand next to the Moon Door. "Do you know how far the fall is?" she asks. "It's fascinating what happens to bodies when they fall from such heights." She then threatens to show Sansa first-hand just how fascinating that can be, when Littlefinger enters.

He informs Lysa that he has "only loved one woman, only one, my entire life -- your sister," then pushes her out the Moon Door.

Because, if you're Littlerfinger, that's what you do.