SD lawmaker: Gay sex is when 8 friends 'take a dump in your bed,' and Jesus hates it 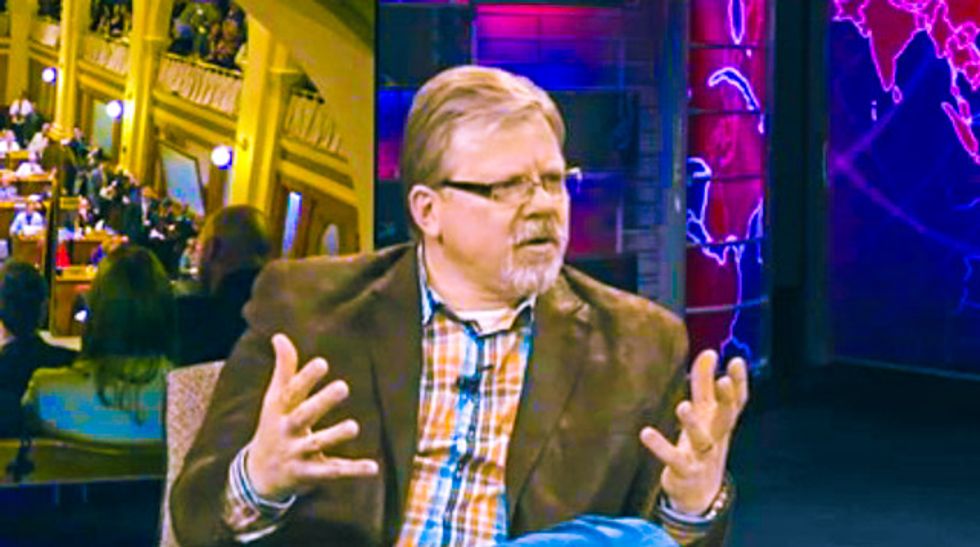 South Dakota pastor and Republican state Rep. Steve Hickey this week defended a letter he wrote to a local paper comparing gay sex to "a one way alley for the garbage truck."

Last week, Hickey came under fire after he posted the full text of his letter to Facebook.

The lawmaker argued that doctors should declare homosexuality dangerous because "we are talking about a one-way alley meant only for the garbage truck to go down."

In a response written to the Argus-Leader on Monday, Democratic candidate Dr. Kevin J. Weiland explained that Hickey was "not only hurtful but entirely wrong."

Hickey got a chance to respond during a 40-minute video interview with Argus-Leader Managing Editor Patrick Lalley later on Monday.

"There are no warnings -- public health warnings -- against homosexual sex," Lalley told Hickey. "The general consensus of science is that the actual physical act is not any more dangerous [than heterosexual sex]."

"And here's what I'd like to ask Dr. Weiland. Do you tell your patients to wash their hands before they eat?" he continued. "Why? Because you touch a doorknob and you don't want to get it inside your body."

"I hesitate to get crude again, but Dr. Weiland, is it OK for, you know, eight of your friends that you're in love with to take a dump in your bed and then you can sleep in it all year long?"

At that point, Lalley warned his guest about being crude.

"I haven't hated on anyone," he later remarked. "I haven't brought up the Bible once in this conversation. This policy can be made without any of that."

But just minutes later, Hickey turned to his Christian background when Lalley pointed out that he was creating a "sense of intolerance" with his descriptions of gay sex.

"People are deluding themselves if they think, you know, God loves you and everything you're doing," he opined. "You know, Jesus... he was forgiving and compassionate, and he told people, you don't be casting stones. And then he told the gal, don't do it any more."

"And what the heck was he talking about when he said in the latter age about a wicked and perverse generation? What is that? So, if we're going to talk about Jesus, let's not be selective. And it's a tough issue for pastors of all sides. This is an impossible thing for me to talk about."

Watch the video below from the Argus-Leader, broadcast May 5, 2014.