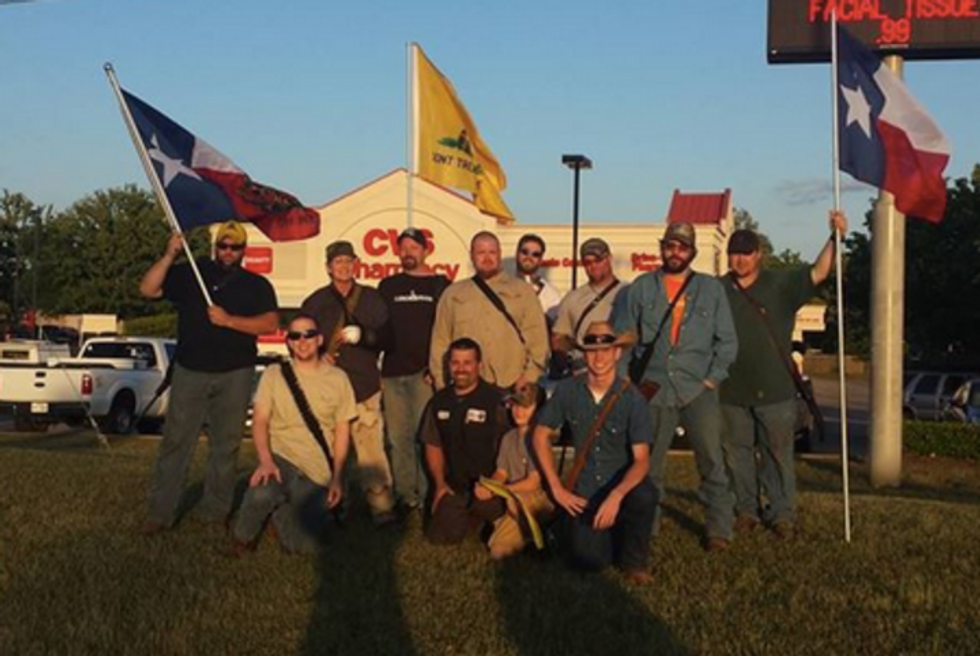 A demonstration by a pro-gun group in Ft. Worth, TX sent restaurant employees at a Jack in the Box location fleeing into the freezer as police responded to the scene thinking a robbery was in progress.

According to Dallas-Ft. Worth's NBC Channel 5, Open Carry Texas protesters are irate that police treated them like criminals for staging a heavily armed protest without notifying authorities and without visible signs stating the purpose of the demonstration.

Sgt. Ray Bush of the Ft. Worth Police Department told Channel 5 that officers received a call Thursday night from employees of the restaurant who thought that the large group of heavily armed white men had come to rob them.

“They locked themselves inside a freezer for protection out of fear the rifle-carrying men would rob them,” Bush said via email. "The demonstration had no signage that would have alerted anyone to their real purpose, and to our knowledge they did not attempt to contact anyone in the Fort Worth Police Department to advise us prior to the demonstration.”

The department responded as it would to any armed robbery in progress, with multiple police cruisers and officers carrying tactical weapons. Demonstrators say that the aggressive response by law enforcement was unnecessary.

“I’m upset that that many officers had to arrive on the scene,” demonstrator Edwin Haros said. “I would estimate around 10 squad cars showed up, some with two per squad car. I believe we counted more than 15 officers showed up on scene."

Haros is an Open Carry Texas member who believes it is his right to carry his Smith and Wesson semi-automatic rifle with him at all times and in all situations.

“Everyone was nice at the Jack in the Box," he said. "We ordered, received our food, walked back out.”

Haros told Channel 5 that police should understand that for people like him to openly carry firearms helps law enforcement.

“It’s just for safety purposes," he said. "Officers can’t be there at all times. We understand that. They can only do so much.”

Bush said in his email that there are better ways to help the police.

“We respect the rights of all citizens to peacefully protest and the right to bear arms. However, we cannot stress enough how a simple phone call to police prior to this demonstration and the use of easily visible signage could have avoided unnecessarily alarming the public,” he said.