The dangerous discourse of "the friend zone". 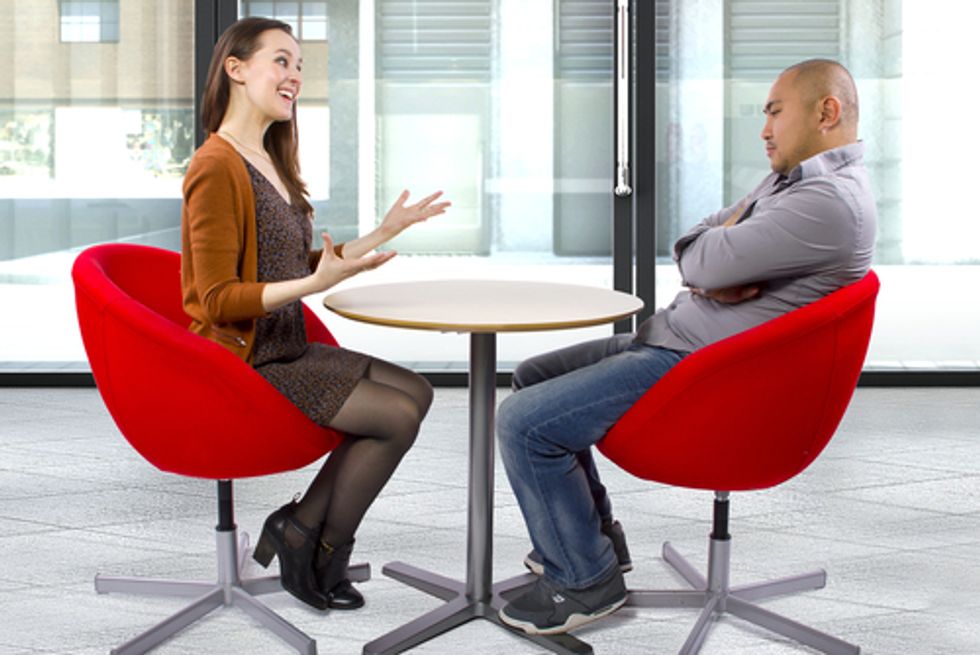 This is the first image I got when I did a stock image search for "friend zone". The implication is clear: Women have nothing of value to say besides, "I get to suck your cock now?"

In response to the Elliot Rodger shooting, I wrote a piece for the American Prospect about "pick-up artists"---whose worldview clearly had a major impact on Rodger's mentality, even as he was growing skeptical that their "techniques" would get him the sex he believed he deserved. There's a lot of variety in the pick-up artist world, but one thread throughout most of it is this notion that women are fundamentally broken, programmed by evolution or whatever to fall in love with users and abusers and that the only way "nice" guys can get laid is to start embracing the emotional manipulations of users and abusers. But I spent a lot of time thinking about why so many men are attracted to PUA instead of boring old dating advice. Dating advice, most of which is aimed at women, focuses on fixing your own flaws and working at being a more attractive person overall. While PUA purports to have some of that, their selling point is usually more that the sexually frustrated young man is fine the way he is, and it's women who are all messed up for not seeing it. (This is about selling points more than debating specific pieces of advice. Yes, both dating advice and PUA might, for instance, suggest dressing better. But dating advice is about dressing better to be better, whereas it's packaged in PUA more like, "How to imitate the kind of assholes that get the chicks you rightfully deserve". It's the marketing that interests me.)

And really, I realized that one reason PUA tends to run circles around dating advice aimed at men is because it taps into this flattering sense that men are owed sex and women are being assholes not to cough it up. Take, for instance, the concept of the "friend zone", which is so widespread that it needs no explanation. Of course, I have to give one anyway: It's the theory that women aren't really into sex so much as they see it as a way to attract attention. So men who give them attention freely are seen as "free" sources of attention and women only give sex to men who make them "work" for attention. The notion that the "friend zone" is permanent stems from the idea that she sees you as a sucker who gives up the attention for free. The possibility that a woman might actually enjoy your company and assume you enjoy it, too, is discounted. The possibility that she may have given you a soft rejection and you're just lingering around, exploiting her polite unwillingness to tell you to buzz off, is pointedly ignored. If you swim in this mentality for long enough, PUA pitches about tricking women into bed by being a dick are going to sound awfully good.

With that in mind, I image searched for "friend zone" and found oodles of memes that make it quite clear the misogyny, self-pitying, and deliberate refusal to treat women like full human beings (instead painting them as sex dispensers whose inputs are broken) that is bundled up with that concept.

Deliberately being literal about polite white lies was a common theme in many of these memes. Many of the men who are told they are handsome and charming are perhaps being subject to a slight exaggeration of their charms at the hands of a woman who is trying to let them down easy. Or maybe they are handsome and charming, but she likes sexy-ugly guys like Serge Gainsbourg. But either way, the point of the meme is to help establish that women are too stupid to know a good thing when they've got it. The possibility that the guy in question might not be right for her is dismissed out of hand.

Indeed, the idea that women are sexually attracted to and only capable of loving "bad" men comes up over and over again. This not only is self-serving for the "friend zoned" man---feeding the idea that he is perfect and women are broken---but it also minimizes and distorts the realities of domestic abuse and violence. In many cases, the Nice Guys® take it to this level, suggesting that women end up with abusers instead of themselves because women are attracted to abuse. In reality, most abusers present as nice, loving men and only roll out the abuse after the woman is invested. In my experience, being a "nice guy" is not a shield against being abusive. On the contrary, men who feel entitled to women's attention and affection are more, not less likely to get violently angry or emotionally abusive with women who aren't being submissive enough in a relationship.

Feeling entitled to "hot" women while resenting them for wanting to be with "hot" men is a common double standard. 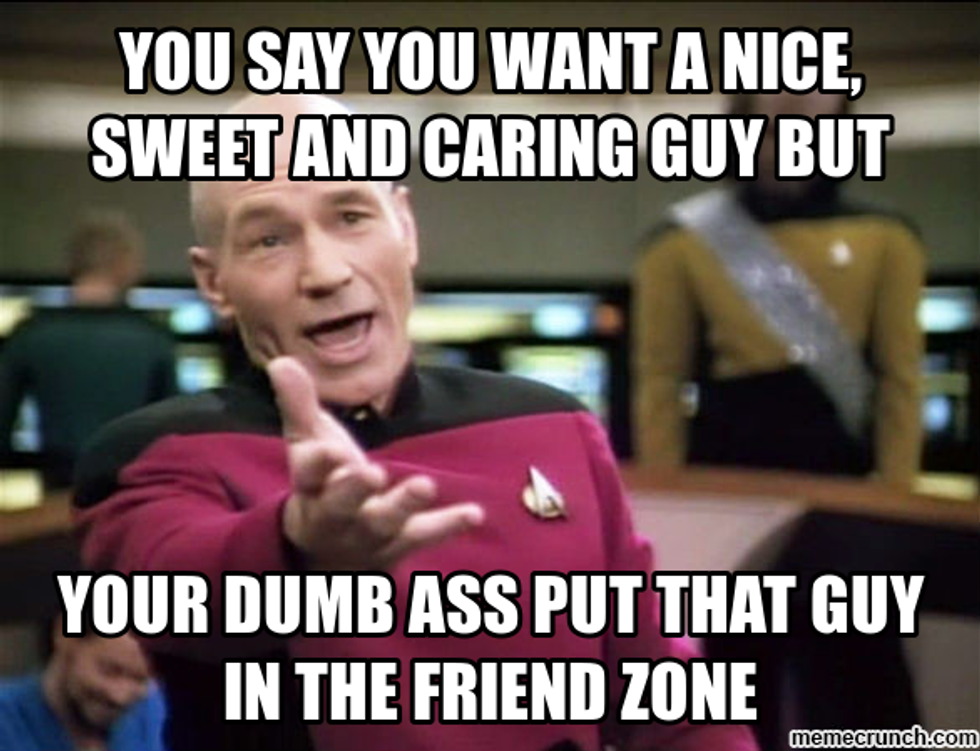 Women are not allowed to have desires beyond just wanting someone who meets the bare minimum of human decency. Sexual satisfaction, interests in common, a sense of humor, whatever it is she wants? All invalid. First guy who says "thank you" when she passes the salt has dibs.

Once it's established that men are hapless victims whose very niceness is supposedly being used against them---and that women are idiots who can't love correctly---it becomes natural to believe that women should be punished for doling out their sexual attentions the "wrong" way. Some of those revenge fantasies are passive.

Some are more active: 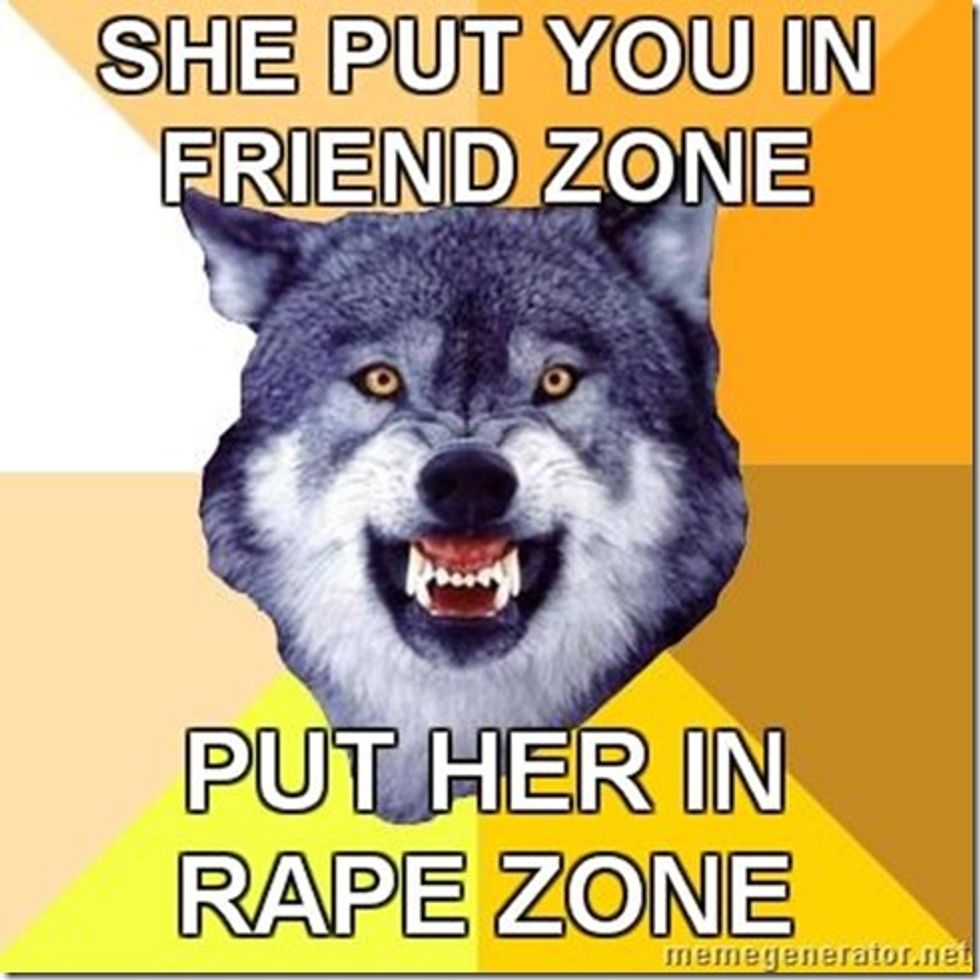 No matter how you slice it, however, there's a relentless drumbeat of messages targeting young men that amount to framing sex not as an activity two people enjoy together for their own reasons, but as a commodity that women possess and dole out based on a metric that is viewed as "unfair". That when a woman you likes has sex with another man, he is taking something that "belongs" to you, something you "earned" by being meeting the minimum standard of human decency. (Or so you think. Passive aggressively lingering around someone who is trying to find away to politely tell you to buzz off is one Nice Guy® tactic, and that's intensely rude and not nice at all. Giving overly extravagant gifts and putting someone on the spot? Also rude. Guilt tripping someone for not wanting you? Super rude. Assuming, without evidence, that a guy that a woman is dating must be an asshole because he's not you? Nasty. Spinning out bullshit theories accusing women of being incapable, as a sex, of wanting what is good for them? Awful. I could go on, but you get the drift.) Once they're worked up into this sense of entitlement, such young men are perfect marks for the "pick-up artist" industry.

Now, there are definitely guys who get into pick-up and start to see that the "be an asshole" strategy is gross, and many of them, now that they're actually out there talking to women, start to realize that women are a diverse group and that dating is less about securing the first "hot" woman you can pick off the herd and, instead, is about trying to find a mutually fulfilling relationship, whether for a night, a year, or many years.

Then there are guys who get disillusioned with PUA because they correctly surmise that there's no "trick" to make women like you, but they continue to subscribe to the misogynist theory that women have failed them by not giving them the sex they believe they've earned. Elliot Rodger boldly, inarguably identified as one of those men.

This stuff was a problem before this shooting, because the attitudes you see on display here are hateful to women and misleading to men. But now it's become deadly.