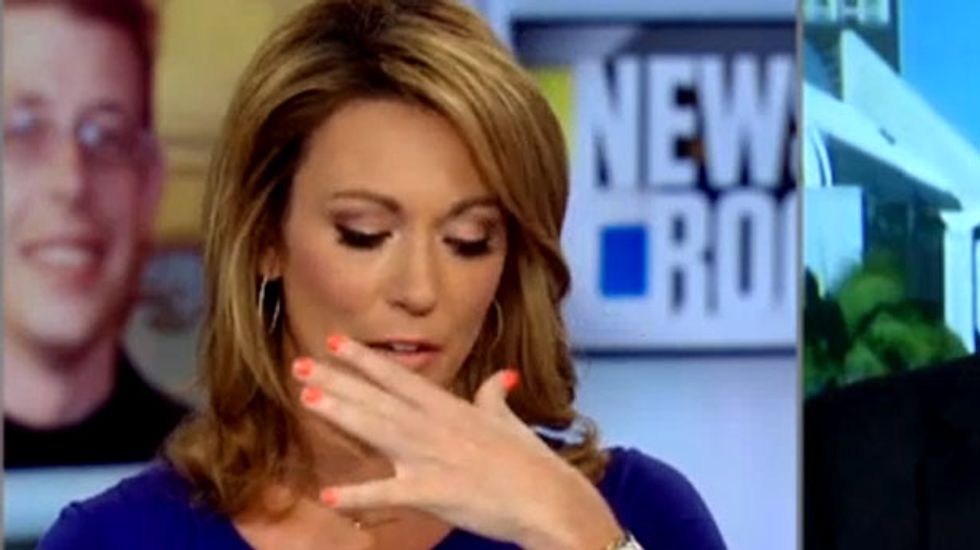 CNN anchor Brooke Baldwin was nearly brought to tears on Friday while the parents of an Iraq war veteran read his heart-breaking suicide note.

"My body has become nothing but a cage, a source of pain and constant problems," the father of Daniel Somers said, reading from his son's note. "The illness I have has caused me pain that not even the strongest medicines could dull, and there is no cure. All day, every day a screaming agony in every nerve ending in my body."

"It is nothing short of torture. My mind is a wasteland, filled with visions of incredible horror, unceasing depression, and crippling anxiety, even with all of the medications the doctors dare give. Simple things that everyone else takes for granted are nearly impossible for me. I can not laugh or cry. I can barely leave the house. I derive no pleasure from any activity. Everything simply comes down to passing time until I can sleep again. Now, to sleep forever seems to be the most merciful thing."

Baldwin needed to take a moment to recompose herself after hearing the dead veteran's words.

"Forgive me, this is tough," the CNN host said after choking up.

The note went viral last year, but has recently re-emerged due to the scandal at the U.S. Department of Veterans Affairs.

Somers was diagnosed with PTSD, a brain injury, Gulf War syndrome, fibromyalgia and other conditions in 2008. His parents said he sought help from the Phoenix VA hospital, but was forced to wait three months.

Somers also condemned the Drug Enforcement Administration in his suicide note, writing that ultimately "[a]ny blame rests with them." He said the federal agency "managed to create such a culture of fear in the medical community that doctors are too scared to even take the necessary steps to control the symptoms."

Watch video, courtesy of CNN, below.