Will Newark's new mayor 'take back' city but alienate investors? 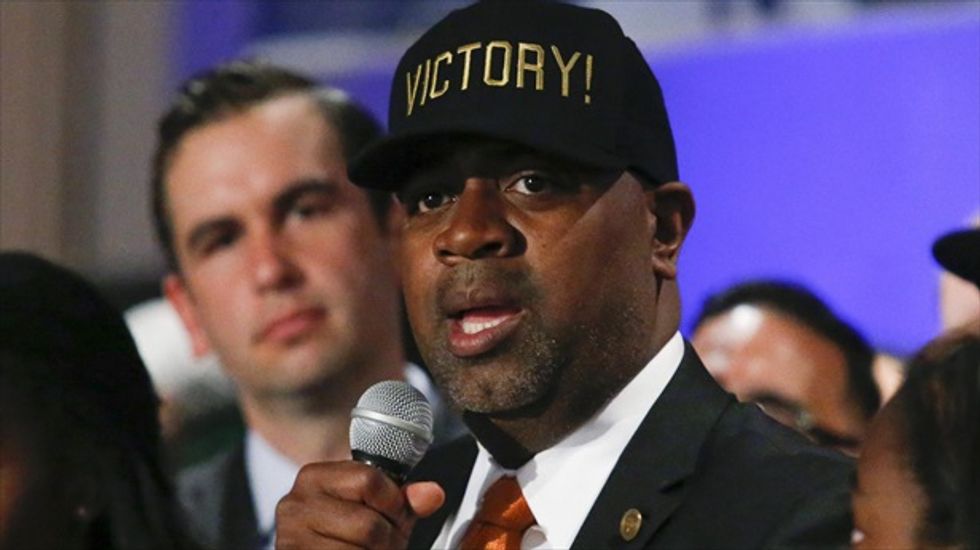 NEWARK, New Jersey (Reuters) - Newark's new mayor Ras Baraka has pledged to bring New Jersey's largest city out of a vicious cycle of poverty and crime, but critics fear he may undo the efforts of his pro-business, celebrity predecessor.

Baraka, 44, targeted his "Take Back Newark" campaign at Wall Street investors, New Jersey's powerful political bosses and the state leadership, which has controlled the city's schools for two decades and is mulling a takeover of its finances for 2014.

"Today, we told them that the people of Newark are not for sale," Baraka said in his victory speech on Tuesday, after defeating fellow Democrat, former state assistant attorney general Shavar Jeffries, with 54 percent of the vote.

"We told them that people outweigh money in a democracy."

His message has resonated in Newark, a city of about 277,000 people located 12 miles from New York City. Once a bustling port, it became a hotbed of corruption and a national example of urban decay in the 1960s.

Critics say the anti-Wall Street rhetoric might reverse some of the philanthropic gains and partnerships built up by Newark's high-profile former mayor, Democrat Cory Booker, who stepped down in November to take a U.S. Senate seat.

"If the new mayor is seen as hostile to those investments that will certainly be factored in to the future investments," said Frederick M. Hess, a philanthropy expert with the American Enterprise Institute.

Booker courted Wall Street and Silicon Valley, attracting billions of dollars that helped to revitalize broad swaths of downtown Newark. That money has not made its way to the hardscrabble neighborhoods or struggling residents, Baraka's supporters say.

"Ras Baraka's instincts are to think about pathways to support and grow working families. When he talks about economic development, he's not saying it only needs to happen downtown," said Analilia Mejia, the director of New Jersey Working Families Alliance, which supported Baraka's campaign.

A former city councilman and a high school principal, the mayor is the son of late poet and militant activist Amiri Baraka, a galvanizing force in Newark since race riots in 1967 cleaved the city, leading to years of corruption and suburban flight.

He has pledged to tackle the most stubborn issues, notably a 13 percent unemployment rate, by tapping into resources that include a major international airport, the fourth largest shipping port in the country, and the geographical advantage of its proximity to New York.

But he failed to convince New Jersey's largest newspaper, The Star-Ledger, which endorsed his opponent, and voters who expressed concern that money would stop pouring into the city.

"I've seen a lot of change, good progress from that national attention," said Addie Johnson, 61, a lifelong Newark resident. "We don't want to be seen as turning away a helpful hand."

Baraka tapped into voter anger at the state government's heavy hand in Newark, including its control over the city's school system and the looming threat of a state takeover of its finances amid a $93 million budget deficit.

Combating Newark's notorious crime, including the highest murder rate in two decades, is among Baraka's top expressed priorities. He has promised to treat crime as a public health issue, with job training and prevention, and by introducing an FBI-backed anti-gang initiative.

The Newark Police Department would not comment on his anti-crime policies.

Anderson's plan to close and consolidate a quarter of the city's schools and the implementation of more charter schools, have led to walkouts and protests by parents.

Political experts say Baraka's ability to sustain relationships with Wall Street and other moneyed partners and to negotiate with lawmakers in Trenton, specifically the Christie administration, will be key to his success.

"I think he does understand the give and take of negotiations in politics," said Professor Roland V. Anglin, director of the Joseph C. Cornwall Center for Metropolitan Studies at Rutgers University.

[Image: Ras Baraka speaks to supporters at Election Night Party in Newark, New Jersey, on May 13, 2014. By Eduardo Munoz for Reuters]

In a press conference last week, Houston Police Chief Art Acevedo said he had notified federal authorities about Pham's presence at the Capitol riot after seeing Facebook photos linking Pham to the pro-Trump supporters. Pham then agreed to meet with FBI agents at his home in Richmond on Jan. 12.