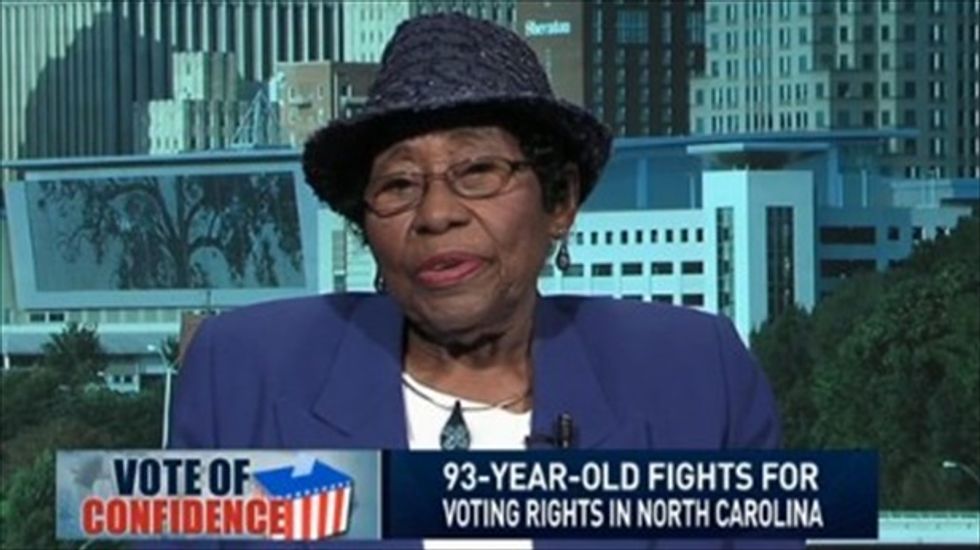 Eaton filed her lawsuit against the law last year, and quickly became a featured member of the weekly "Moral Monday" protests against the legislation.

The new laws eliminated same-day voter registration and "straight ticket" voting, while also requiring a state-issued identification card. Eaton's lawsuit states that, while she has a current driver's license from the state, the name on it does not match the one on her birth certificate. Ameliorating the discrepancy, the suit states, would "incur substantial time and expense."

In supporting the laws, McCrory has argued that they were implemented to prevent voter fraud, but Eaton cited her decades of experience working as an election worker to rebuke McCrory's statement.

"I worked the polls 40 years, and I worked over 25 years as a [precinct] judge," she told Sharpton. "We sincerely checked the ballots and everything was going good. It was not fraud. They didn't find any fraud."

The laws, part of a larger trend of Republican state legislatures limiting voting rights, have since been criticized by not only state activists, but President Barack Obama and Attorney General Eric Holder.

The state measures also came under fire after a Republican party official boasted to The Daily Show that they would enhance his party's electoral chances.The official, Don Yelton, was quickly fired for his statements.

On Wednesday, Eaton confirmed to Sharpton that in her youth, she was forced to take a literacy test before being allowed to vote.

"I think it's worse [now] because I know what to expect," she said. [Back] then, I didn't know, so it wasn't surprising. But it's a very difficult situation now."

Watch Sharpton's interview with Eaton, as aired on Wednesday on MSNBC, below.